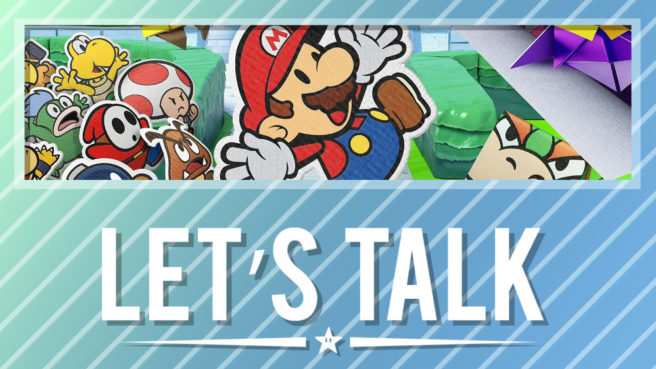 For a lot of its games, Nintendo has a short turnaround between announcement and release. Paper Mario: The Origami King really took that trend to the next level. The game was only just revealed two months ago, yet it’s already out.

Though it’s only been a day since the game came out, we imagine that many of you are already playing Paper Mario: The Origami King. Based on what you’ve experienced, how do you feel about it so far? What do you think about the gameplay, story, characters, or other aspects? Share your thoughts with us in the comments below.

Highlights from last week’s topic: What are you playing? – July 2020

Just busted out my 3ds for the first time in a while, finally got to Strange Journey Redux, just beat sector F. Overall having a good time, and pretty nice to have an excuse to return to my first mainline SMT game.

I won’t speak to any story changes, but a lot of the gameplay changes, while very nice QoL features do seem to make the game easier. Honestly though I find that the biggest thing making the game easier is the bonus dungeon.
It seems pretty clearly intended to be played 1 floor per sector, but fighting through each floor as normal gives much more cash/exp than the game, initially designed around that bonus dungeon NOT existing, really expects you to have so I end up feeling over leveled without ever really grinding. Feels kind of weird for a game I remember being pretty difficult on my first playthrough being made so much easier just because I am playing the bonus content as seeming to be intended.

That said there are more difficulty options than there were in the first game and I am only playing on the standard difficulty, so maybe turning it up can compensate if you are trying to get the same challenge as the original with the bonus stuff included, I donno.

Xenoblade Chronicles : Definitive Edition, mostly.
I also started Duke Nukem 3D (I only played Hollywood Holocaust so far, so I’m not far at all), played through Kuukiyomi : Consider it and a thing called the First Tree.
But Mostly it’s Xenoblade. I reached the last “set” of population recently, and I love the area they live in. Great game.

Lonely Mountain: Downhill. Its all downhill from here.
Ninaja for briefly but I think I’m gonna call it quits. There’ just no incentive other than collecting stuff I don’t care about.