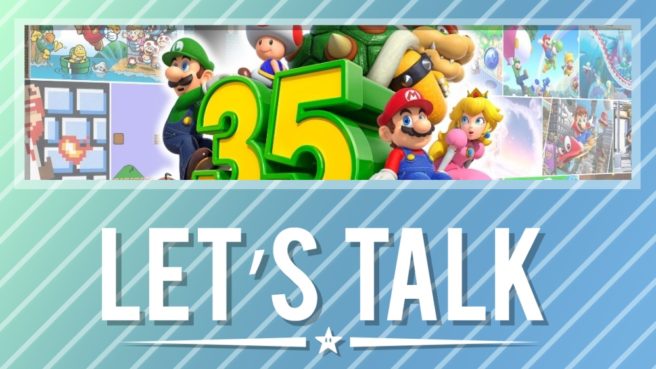 Nintendo dropped another Nintendo Direct on us a few days ago. It’s been all about third-parties over the summer, but not this week. To celebrate the 35th anniversary of Super Mario, fans were treated to all sorts of news and announcements.

So how’d you feel about the Super Mario 35th Anniversary Direct and everything that was shown? Which games do you plan on playing? Let us know in the comments below.

If you like rhythm games, boy, was this the Direct for you. There were like three or four, I think. Most of them in a row at the beginning to the point where I actually kinda thought it was going to be a “rhythm Direct” after that. Like, we’re just theming these things on one genre now. XD

Only thing that really got me excited was Collection of SaGa. I loved 2 and 3 (and quietly tolerated 1), so I’m actually kinda looking forward to revisiting these. I’m also really appreciating Square Enix digging into their old catalog of games to make them accessible like this lately (from Collection of Mana, to the first three Dragon Quests, to the first Star Ocean, up to now with this trilogy of games we haven’t even seen since the GameBoy days). I hope they keep going! Still hoping to see the first six Final Fantasy games, the Zenithian trilogy of Dragon Quest, and lots more. Keep ’em coming!

But yeah, other than a collection of old, kinda niche games, this Direct was a snooze for me. ^^;

I was… Content. Something about the “Partner Showcase,” phrasing made me not expect much. And well, not much came from it.

However, I did enjoy Puyo-Puyo Tetris 2 announcement. Always enjoyed a good puzzle game on the go.

Fans expect Nintendo to break the silence about their lineup for the rest of the year but when they finally speak not only do they not show anything of their own, they manage to make a presentation without anything that could be even remotely considered as a big release. The previous presentation had SMT, it’s niche, not everyone is interested in it, but it is a high profile announcement. This time there was no such thing, which is particularly infuriating when there are big “partner” releases supposedly scheduled for this year that we are still expecting news on (No More Heroes 3, Bravely Default 2, Bayonetta 3 further down the line …), so the only thing that can result from such a lineup is disappointment, a dozen minutes of expecting something more interesting to show only to arrive at the end of the video.

It’s hard to even highlight anything that appeared in this presentation. Second rate games, spin offs, sometimes borderline shovelware. Not to say that the games were encessarily bad taken individually, personally I am somewhat interested in Puyo Puyo Tetris (even though the DLC aspects are off-putting) and have some curiosity for that Final Fantasy Adventure collection. I guess that some people can be interested in the Kingdom Hearts rhythm game (though it’s incredibly disappointng as the first release in the series on the platform), the 3DS drum-thing “RPG” collection, people may be fans of Captain Tsubasa too and maybe some even like Just Dance as a party game.
But none of that makes the second half of 2020 look any better, and I’m convinced that’s what people are hoping Nintendo will end up “fixing” in a presentation. Only they don’t.