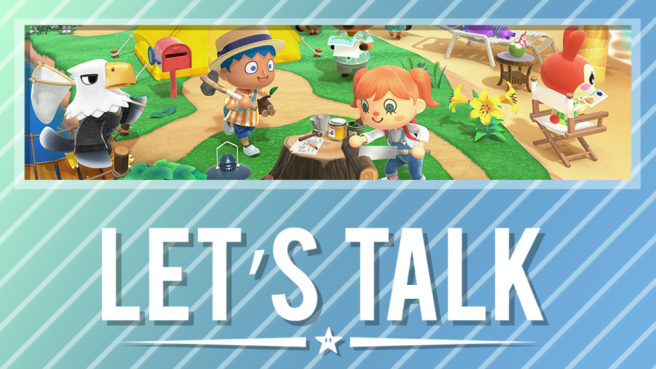 A new month rolled right on in last week. Now that we’re in April, we want to know what you’ve been playing.

Still setting up your island in Animal Crossing: New Horizons? Trying out anything from the recent Nintendo Direct Mini like Good Job or the Bravely Default II demo? No matter the case, let us know in the comments below.

Highlights from last week’s topic: Super Mario re-release for Switch you’d like to see the most

I’m interested in seeing Mario 64, but for a weird reason. I want to see if they do like they did with Mario 64 DS and change things up again. I think it could be cool to see a reworked Mario 64 with some of the Mario Odyssey moveset added in. If they did something like that though I’d want them to also include a classic mode option that’s a straight port of the original. It could be a fun way to show just how far 3D Mario has come, and I imagine a straight port of the original wouldn’t add that much extra data to the game.

For actual playing though I’m interested in Mario Sunshine. I never got far in that one and I don’t quite remember why. I think Isle Delfino would look breathtaking with Odyssey level graphics and I’d love a second chance at that game for sure.

Assuming all of the rumors are true I hope they don’t forget about 3d land. Not because I love 3d land or anything but because it would bother me way more than it really should if every 3d Mario was on the switch except for one

1. Galaxy 2 (my favourite game of all time tied with Portal 2)
2. Sunshine (my second favourite collect-a-thon Mario after Odyssey)
3. 3D World (great co-op game)
4. Galaxy 1 (I love it but i prefer Galaxy 2)
5. 64 (it was before my time and i feel the controls need to be improved before i can enjoy it
6. 3D Land (3D World is the better game imo)

I’d like to see Super Mario 64 get a proper re-release, personally.

The DS remake wasn’t bad by any stretch, no doubt, but its controls were a little weird to me (albeit understandable) as its face buttons and D-pad or touch screen just doesn’t strike the comfy cushion that the N64’s controller struck for me, especially since the DS forces me to hold the Y button while using the D-pad to dash, nearly eliminating the ability for me to do a dive as I find it difficult to quickly slide my right thumb to the A button. Of course, there are different control settings, but they’re just too out of reach of my comfort zone.

Having additional characters to play as was also a neat idea on paper and I do like how Luigi finally gets a playable role in the game without solving the “L is Real 2401” mystery, but for a game that is mainly designed around Mario himself from the original game it just feels weird to me to see additional characters (especially Yoshi and Wario) clash with that stigma, especially since the DS version opts for a weird design choice by starting you off with Yoshi (thus, you have to unlock Mario, Luigi, and Wario) while having Mario the “only one” to face Bowser thrice.

If the Switch were to get a proper Super Mario 64 re-release, then I’d like to see two different modes (Mario-only mode and Four Heroes mode) with the DS version’s stars and courses on both sides (with some levels being a little redesigned to accommodate Mario’s abilities).

I want Mario Sunshine the most.
I’ve heard some people complaining about the game, but I don’t share their sentiment.

My favorites 3D Mario games are:

I have both Mario Galaxy on my Wii U and I did beat them recently, but it’s been a while since the last time I played Sunshine.

I’d like Mario64 since I missed it in its time. But only if its remade. The looks of games from that generation are hard to bear now! ^_^¿