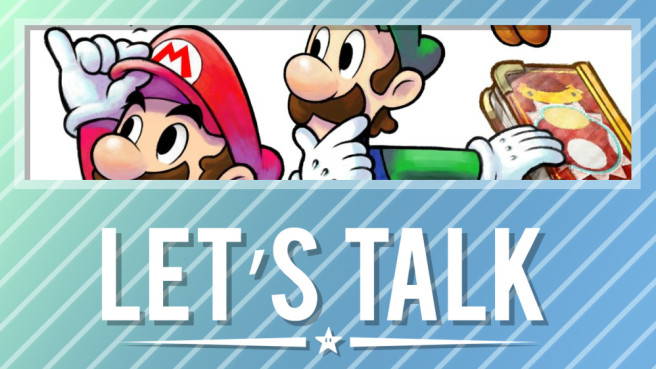 A new month is here! We entered February just a few days ago. So that means we want to know what you’ve been playing. Have you started up something entirely new for the month? Or maybe you’re continuing something you started a little while back? Whatever the case, let us know in the comments below!

Highlights from last week’s topic: What do you want to see out of NX?

I really want to see Nintendo make better use of their IPs and realize them to their full potential with the NX. F-Zero is a franchise that has been long left in Nintendo’s vault of lost franchises and I hope that they make a new entry and give the fans what they want.

While at the same time, I hope that they continue to make new franchises that will give us new experiences and characters that we can all remember for years to come.

The online needs to be implemented in more games. I felt that there were so many games on the Wii U that could’ve had online but didn’t (for example, Pikmin 3, Hyrule Warriors, Nintendo Land, etc). It could add a lot more replayability to a lot of Nintendo’s games. I feel like Nintendo got online right with the Wii U, but I would love it if they just used it more.

I don’t necessarily care for the graphical power of the system because that’s not what makes a system great. It’s all about being easy to develop for and making sure you have good third party devs on board with the system from the start. Also have more memory space for the NX too. The Wii U had 8-32 GB of memory which, for a console that released back in 2012, is pathetic. The NX should have at least 500 GB or more so that people don’t have go out and buy a external hard drive just because their system has a petty amount of memory space. Also backwards compatibility would be nice too.

Oh and please don’t let the NX only have digital games. Us physical game collectors would all let out a collective groan if that rumor was true.

*EDIT* I also don’t care if the NX uses any gimmicks or not. I love the Wii Remote and the Wii U GamePad a lot. Whether the NX is a standard console or a gimmick console I don’t care. Just give me a system that I can have fun with. 🙂

*EDIT #2* Also have the NX be region-free too. Thank you.

My friends live faraway in other states now, the ” living room experience ” is practically nonexistent for me.

Wii U + Gamepad compatibiliy to justify my purchase even more, and all the 1st party titles that went missing on the current gen. Games like F-Zero, Metroid… and others.

For a start, backwards compatibility; we know it’s a thing that people do want. You get a few stalwarts who say, “Why would I want to keep going back to the old generation??” In regards to the XBox One and PS4, but with the announcement of XBox One’s more proper backwards compatibility (And PS4’s more money-grabbing model) that people want to keep playing the games that they own (Or, again, in the PS4’s case, paying for them all over again). As far as I’m concerned, the Wii U has been my favourite console of all time (So far), so I’m not ready for them to drop all the excellent games they’ve brought out this generation. I love the gamepad integration, hell, if they can continue to support wiimotes and all those accessories, more power to them. Nintendo has a good array of control options for the Wii U, and it would be a drag if they threw all that out.

Now, I understand that the non-Smash Bros amiibo haven’t been as popular, but I hope they don’t give up the amiibo model, because they’re fun, and I personally really like them. I don’t think they’ve been deterred yet, so I can’t imagine they’ll just full stop with amiibo.

Ultimately, I want the NX to be a powerful console, but not for me; I think the Wii U is producing beautifully crafted, Nintendo games. I hope it’s powerful enough to satisfy the Nintendo doomsayers.

Oh wow! Here’s my dissertation. First, isn’t it great to speculate? I guess there is a big difference in what I want to see, and what Nintendo is likely to give us? I mean as a fan I dream of a VC subscription service that might have GameCube games on it.

I would love to see a hybrid system that in home console form would be as powerful as the PS4, and the portable would be HD. It would allow for Nintendo to compete with Sony, Microsoft, iOS, and Android. Again, a perfect world scenario.

The launch title for the portable side would be the next generation of Pokemon. I think this would instantly sell as many devices as they could make. The home console par would launch with a 3D Mario, Metroid, and Zelda NX. It’d be great to get the new Pikmin and a Day one Animal Crossing.

Third Party support would Give us the new Dragon Quest by Square. Wouldn’t it be great to get a definitive Kingdom Hearts (pipe dream)? It would be amazing if Capcom could surprise us with a 3D Megaman in the Galaxy style. I could keep going.

I think Nintendo should focus of course on making their first party titles all they can be. They need to take some of their other properties and go second party through maybe a Yacht Club or Wayforward. Finally, I say find just a few solid Third Party groups to play nice with. They don’t need all of the next ten games on their system, but they need a few.

NO REGION LOCKING. That is a huge deal for me. I’d also like to see more creativity within each game series, things like NSMB and Paper Mario have become uninspiring. I’d welcome some exiting gimmick, but let’s face it: only like three games would ever use it in a smart way, so it’d be just a small bonus.

There are A LOT of things I want to see out of the NX, but the most important thing basically: I want a powerful console with strong third party support. I won’t buy another Nintendo platform that will force me to buy a Xbox/Playstation next to it just to get my full fix. I’m tired of Nintendo consoles being nothing but secondary platforms.