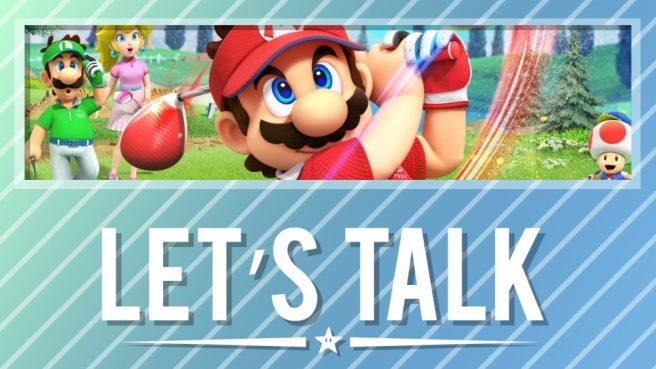 A new month rolled right on in this week. Now that we’re in July, we want to know what you’ve been playing.

There have plenty of new Switch games as of late, especially within the last week or two. New releases include Mario Golf: Super Rush, Tony Hawk’s Pro Skater 1 + 2, Legend of Mana, Disgaea 6, Destroy All Humans!, Sky: Children of the Light, and Doki Doki Literature Club Plus. Have you picked up any of these titles? What are you playing right now? Let us know in the comments below.

Metroid Dread was the top announcement for me, but Nintendo had a packed Direct overall. Warioware, Mario Party and especially Advance Wars were all nice surprises and BOTW2 looks epic of course. Nintendo stole the show.

If you weren’t expecting heaps of big hitters, and are someone who enjoys Japanese titles as well as Nintendo’s medium/dormant franchises, this was a very strong Direct. WarioWare, Advance Wars, a new Mario Party, SMT V, Metroid Dread, the Fatal Frame port, Danganronpa ports, DBZ Kakarot port – these are all good titles. Kazuya in Smash wasn’t a huge hype reveal, but a nice one nonetheless. The BotW2 trailer wasn’t too bad, but I don’t think that was the biggest highlight.

On that note, probably the most disappointing bit (lack of big hitting titles besides BotW2 aside) was the Zelda portion at the end.

(Man, it’s been a long time since I posted here)

Overall, I’d say the Nintendo presentation was my favorite of the bunch this year.

I was blown away by Metroid Dread. Seriously, it came outta left field for me. My feelings were shock that a truly new Metroid game was coming for us to play, joy in having a new Metroid game to explore, and elation that Nintendo is FINALLY showing us what’s happening after Metroid Fusion.

My mind couldn’t really focus on anything on the presentation after the Dread announcement so clearly Metroid Dread was the standout title for me.

After re-watching the presentation, I was enamored with Mario Party Superstars. Though I hope Nintendo uses the game as a learning tool to make a better new original Mario Party in the future, where they might glean from Superstars what Mario Party fans love to play.

Zelda getting the Master Cycle Zero in Age of Calamity looks like great fun!

The sequel to Breath of the Wild looks to be a great game. I’m excited by the new ways Link will access the Sheikah Slate powers and the expanded play area for this adventure. I also think that the game might let us control either Link & Zelda or two different versions of Link (the different hair & clothes seem to be an possible indicator of multiple playable characters). I’m intrigued about BOTW2…

…BUT UNCONTROLLABLY HYPED FOR METROID DREAD!!!!

In terms of presentation, I enjoyed Microsoft’s showcase more, but the Nintendo direct had more games that was interested in (weird, I know).

The biggest highlight had to be Metroid Dread, I’ve already preordered the collectors edition and amiibo, if they announce a Metroid themed Switch, I’ll be all over that too.
2 other games I’m excited for and have already preordered, Advanced Wars and Cruis’n Blast.
WarioWare and Mario Party look great, I’ll get both eventually.
Happy for Fatal Frame V and SMT V
Kazuya was semi-surprising.
I felt the BotW sequel trailer fell a little flat, but I’m still pretty pumped for it next year.

Though there were little disappointments in the direct being no Bayonetta 3 or Prime 4 news, and no news on what some of Nintendo’s other developer studios are doing, like the Mario team, Monolith, Next Level and even whatever Retro had been working before Prime 4. Though I didn’t mind not seeing more on Splatoon 3, it’s enough to know it exists right now.

Overall, a good direct in an otherwise bad E3 show, Nintendo and Microsoft were definitely the saving graces this year.

If I had to pick just one, Metroid Dread. It’s so sweet to see Samus again, and this time in a brand new entry. I loved the name reveal; first I was ‘eh, are they really gonna call this Metroid 5? So bland and unoriginal’ and then when the name Dread came in it was exhilarating – the game I was waiting for since 2005 is finally coming! I will play through the 2D games while it doesn’t come (I’m already at Zero Mission’s Mother Brain) and maybe the Prime Trilogy if my schedule allows for it.

As for the rest of the presentation:
I – Warioware was amazing to see too.
II – Advance Wars Re-boot Camp is cool but somewhat bittersweet, as it is not a new game and it’s [edit: possibly] digital-only.
III – Fatal Frame was also bittersweet, as I feel this game loses a lot without the Gamepad and I would prefer a new game or a remaster of IV (never came to West) or even II remake. And the whole multiplat thing disgusts me. But yeah, here I go for it again!
IV – I was indifferent to the Smash reveal. I never played Tekken so I did’nt even know Kazuya properly, although I was able to surmise it was a Tekken character due to the design. Guess it’s fair, since Namco works hard on Smash.
V – Mario Party Superstars felt unnecessary to me at first, but I will get it to play with my family nonetheless, so I guess this was a good decision from Nintendo.
VI – The new Zelda trailer was pretty good but not even nearly as impactful as the last one. But we got snippets of gameplay, and I am very enthusiastic about the game. Maybe it will be like A Link to the Past? Or Ocarina? Or something else entirely. Can’t wait to have it in my hands.
VII – The Zelda Game&Watch is awesome! I am a huge Zelda fan and I am happy for what lies in the future of Zelda. I never understood the people that were anxiously and obnoxiously believing a Zelda collection containing the likes of TP and WW HD was guaranteed to happen. It almost looks like those people don’t know Nintendo at all. Glad Aonuma shot down the endless speculations.
VIII – And yeah, I am still very excited for games that were shown at the Direct but were announced long ago like Monster Hunter Stories 2, Mario Golf and, of course, Skyward Sword HD.

Addendum: Forgot to mention that mess of Guardians of the Galaxy cloud version. I noticed at first because I read the small letters, but most people didn’t. Square must be kidding with us. We won’t like a cloud game anyway, so why not be honest about it? If they want to avoid negative feedback, just don’t make cloud versions and make actual ports.