[Let’s Talk] What do you think of Pokemon GO? 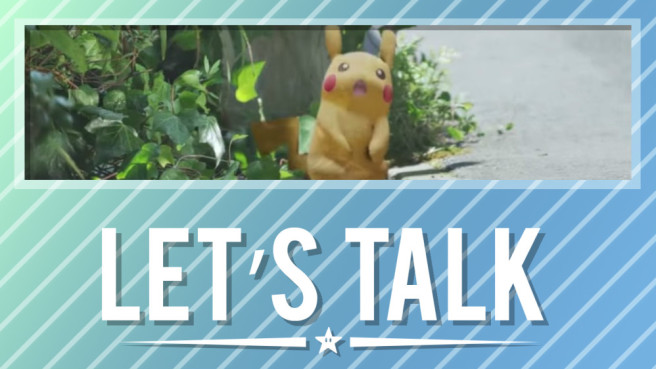 Pokemon GO was announced about a year ago. But just within the past week, we’ve seen the first off-screen footage and some gameplay screenshots. Niantic and The Pokemon Company divulged new information as well.

Based on what we’ve seen over the past few days, how do you feel about Pokemon GO? Are you less interested compared to the initial reveal, or maybe more? Are you still planning on giving it a shot upon release? Let us know in the comments below.

Highlights from last week’s topic: What are you playing? – March 2016

Also, thanks for putting me on the highlight reel.

Sonic Generations (although I just finished up with it for now). I had already beaten it years ago but went back to 100% complete it by getting the remaining achievements and getting S Rank on everything. I had recently gotten Xbox Live Gold so I was doing Ranking Attack on every stage trying to do flawless runs. No joke, I probably spent six hours trying to do perfect runs of Crisis City Act II and Rooftop Run Act I. I did end up placing 71st on the leaderboard for the latter though, and 78th on Planet Wisp Act I, so it was satisfying in the end, especially since it’s the first time I’ve reached an incredibly high spot on a leaderboard.

Pokemon Yellow. I actually had the original cartridge but sold it (along with several other games and the Gameboy color itself) for a criminally low price. How stupid of me, I miss the thing every day. I never even played it much because I had gotten so used to every other generation and this felt like an extreme downgrade.

I never played the 1st gen games, and my 20th anniversary N3DS arrived last week, so this was a great opportunity and better time than ever. Fresh from Pokemon Y (which I still haven’t beaten for some reason..) I realized the original games were much more of a grind than I thought they’d be. I’ve beaten Misty and Blue again so far and am wondering if I should evolve my Nidorino now or wait until it learns horn drill.

Bottom line, I’m having tons of fun with a game I wrote off in the past. Surprisingly, I’m getting strong feeling of nostalgia from a game I never really played before. It’s reminding me of why Pokemon is my favorite game series of all time.
Now I await the digital release of my first and favorite Pokemon game of all time, Pokemon Silver. C’mon Nintendo!

So far I’m juggling Xenoblade Chronicles X and Fire Emblem Fates. In X, I finally got the flight module after 100 hours of play, and it really made me appreciate how wonderful the world design is within that game. It’s probably my favorite game on the Wii U due to just how vast, expansive, and engaging the entire experience is. As for Fates, I think its great, but I’m kind of disappointed with the story which seems kind of generic and cheesy. There were multiple times when the boss of a level would just warp away magically after you defeat them, which felt kind of cheap. Other than that though, the game is pretty fun and I like the My Castle feature.