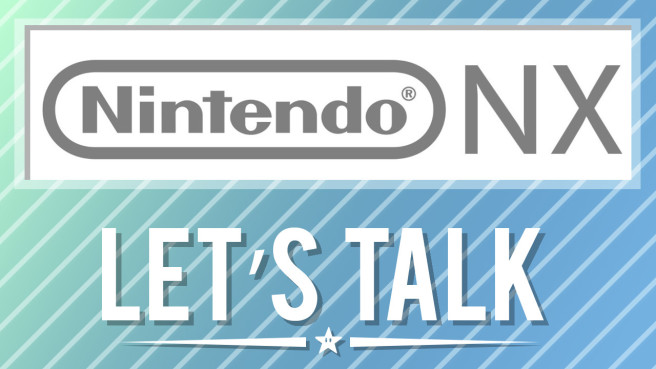 It was almost a year ago that we first heard about NX. Late Nintendo president Satoru Iwata announced the platform during the same conference where the mobile partnership with DeNA was made known, which was a move to assure fans that the company is still dedicated to core gaming systems.

We’ll finally be hearing more about NX this year. At the very latest, news will be coming in June at E3, though I’d be surprised if Nintendo didn’t touch on it a bit before then. We’re only a month into 2015, yet the rumor mill is already stirring with plenty of speculation. And as the months go on, we only expect this to continue. Rumors will persist so long as Nintendo remains quiet!

Everyone is anxiously awaiting new information about NX… which might not be an entirely bad thing! It allows us all to keep dreaming and imagining different elements about the system. We want to hear from you guys on this very subject: what do you want to see out of NX? Tell us in the comments below!

Highlights from last week’s topic: What would you like to see from a new Paper Mario game?

I still want a Paper Luigi game. But in general I’d like a return to roots like the first 2 games. I would also like Bowser to be playable with his own partner(s).

like everyone else, i hope it plays like a traditional paper mario game albeit with a few twists here and there. in terms of how much story there is, however, i really hope they aim directly between the original paper mario and TTYD. up until sticker star, they kept cramming in more and more dialogue into their games which led to their undoing in my opinion.

the original paper mario didn’t have too much which made it super enjoyable to pick up play through multiple times. TTYD on the other hand had a lot more which made it much more memorable and fun, but also a little tedious, especially on replays.

overall i like both the original and TTYD equally for different reasons, so i hope they can find a nice balance between those two while also trying out some new things.

I do want them to return to the RPG aspects of the original Paper Mario, but with a combat system that works better than the timing of attacks, like the Mario & Luigi Series where you CAN avoid damage completely. Super Paper Mario was a game I really liked because the story and the mechanics introduced, like the scoring system that levels up and the platforming-based battles, with enemies that work around that, and I really wish they had taken more chances with Sticker Star, it felt more of a point-and-click adventure than an RPG (to be honest I was never a fan of turn-based combat, so getting rid of grinding for levels is a plus in my book) and the Sticker mechanic wasn’t used to its full potential (likely because the 3DS limitations), I’m talking about an Epic Mickey-syle game with the stickers that add or take from the world around you, with platforming and combat that works around that.

But my biggest issue is how little RPGs there are in consoles nowadays, Super Paper Mario was made that way because a turn-based combat was seen as primitive on a console with such capabilites, Sticker Star tried to return to the turn-based combat with its own twist on it, but just didn’t work. So with the power of the Wii U, the access to the GamePad and the fact they’re Nintendo, this can mean a new style of combat, which I hope works.