[Let’s Talk] Will you play Switch more as a console or a portable? 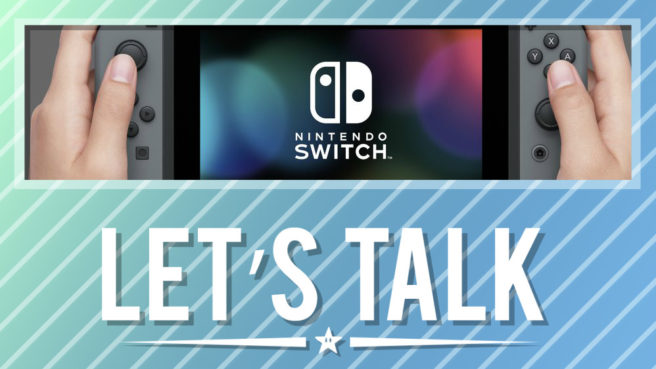 There are two big ways to play Switch. You can use the system as a traditional home console, but Nintendo is also offering an option to play it as a handheld. So as a simple question for you this week: which one do you see yourself preferring?

I’ll probably end up using Switch more as a portable system personally. These days, I’m so busy and caught up with a bunch of different things that I find it difficult to be in front of a television for an extended period of time. I really do like how the portable option lets you play anywhere and easily come back to a gaming session. That being said, I definitely won’t be playing Switch exclusively as a handheld. I know that I’ll want to at least have Zelda on the big screen at some points, for example. Thankfully the Switch dock makes moving between both modes very simple.

That’s just me though. Curious to see what everyone else has planned!

Highlights from last week’s topic: Will you still pick up Zelda: Breath of the Wild on Wii U?

I’m planning to buy the Nintendo Switch only next year and I already have my own WiiU so, yep, I’m still going to pick up Breath Of The Wild on WiiU

Yes, I plan on getting it on Wii U first simply because I won’t be getting a Switch for a long time and also because it has a chance of becoming rare.

I got a simple reason, really

I intend to play the game at launch and I don’t really like waiting more for a game I have been waiting for, for a long time already

I’m getting both the Switch and the WiiU versions because I’m a collector and a completist. I’ve already spent an obscene amount of money on the Switch and all of the Zelda guides (regular, collectors, deluxe), Zelda game variants (SE and UK LE) and oh so many accessories.

Switch version, also Wii U version, and an expansion pass for each.

This is the greatest Zelda (maybe even game?) of all time. Even if Switch was never going to see another game afterwards, it would be worth it for having said greatest game on a handheld alone. As for Wii U… for completion’s sake I guess.

As long as my budget for the fortnight allows, I’ll definitely be getting the Wii U version of Breath of the Wild as well as the Switch equivalent. Like what was mentioned in the article, it’s more due to being sentimental than anything. This is mainly due to it being the last Wii U game (at least from Nintendo), and because the Wii U got me back into Nintendo and console gaming; a hiatus I’d been on since the Nintendo 64.

So, I’m looking forward to playing on both… but I’ll have to think about whether I’ll be doing the same with the DLC.