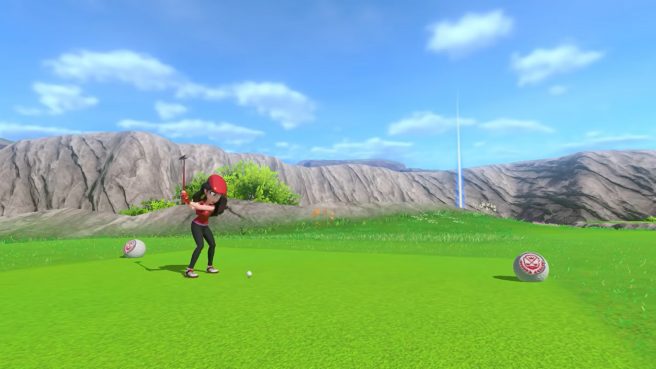 Yesterday we posted the first half of the Nintendo Dream interview with some of the lead staff on Mario Golf: Super Rush, which covered the team’s approach to new entries in the franchise, opening cinematics in Mario sports games and much more. In the second half of the interview, the team goes on to talk about other aspects.

Here’s the rest of the translation:

Battle Golf was introduced as a new game mode. How did you come up with the idea for it?

H Takahashi: I called it Battle Golf* in the beginning (laughs). We wanted an esports-like mode and when we were thinking about how that could work in a golf context, one answer to that was Battle Mode. It took a lot of trial and error…

S Takahashi: In the beginning we discussed whether it would be fun to let players play Jintori (a children’s game in Japan where the objective is to capture the enemy base). As opposed to regular golf where players work their way around from the first hole, let players approach the holes in whatever order they want. It flips golf on its head and condenses Battle Golf down to its most fun.

H Takahashi: Originally we were working on something with more mechanics, but as development progressed those ideas disappeared and the more streamlined Battle Mode materialized.

S Takahashi: The first prototype wasn’t fun enough, and through trial and error we worked and reworked the mode’s gimmicks until we were satisfied. Nintendo was kind enough to debug and test it for us as well, changing the size of the map and helping out with balance.

Yamamura: The core of the game mode is the fact that you can play many holes at the same time. In previous titles you could only play one hole at a time, so playing many holes on a single course is a fun shake-up. That’s how the concept of battling over the holes was born, and we settled on the fact that it would be best to take the holes in whatever order you like.

Simple and easy to understand – that’s the fun of Battle Golf!

Yamamura: If you’re going to scramble for the holes, having a smaller field and focusing on speed makes sense. Once we’d decided on what that looked like, we wanted to showcase the fun by adding it to the opening cinematic.

A mode where you can raise a character has been a series staple for a long time. How did you go about making it this time?

Like in previous titles, it’s a game starring a Mii you raise alongside Koopas, Boos and Chargin’ Chucks. Can we start with the fact that despite it being a golf game, Chargin’ Chuck is there? (laughs)

H Takahashi: Honestly, I was surprised too (laughs).

Yamamura: At first we asked Camelot to concentrate on coming up with and developing an interesting story. They made the script, and from there we figured out how we could adapt it in the world of Mario. Thinking about what character would be best as the main character’s rival for example, those sorts of decisions were made in cooperation with Nintendo. In these talks, we thought that if there were going to be power characters, Chargin’ Chuck would be a fun choice.

H Takahashi: It surprisingly worked out, didn’t it?

Yamamura: I find myself getting more and more attached to him (laughs). He’s a good egg, that Chargin’ Chuck!

Yamamura: Some interesting characters make an appearance, particularly in the back half of the story. I think it ended up really interesting.

H Takahashi: Nintendo didn’t place any limitations on the story so we were free to tell the story we wanted. We even made the side stories for the Mario characters which was a bit nerve-wracking… Ultimately, we tried to make it with as many surprises as we could.

Characters in the Mario Golf series talk a lot, it’s as if it’s an RPG (laughs).

H Takahashi: We were surprised by how active a role Mr. Yamamura wanted Wario and Waluigi to play in the story (laughs).

H Takahashi: We brainstormed ideas with Nintendo and reworked the story quite a bit.

Yamamura: It started as a story where you raise a trainee Mii golfer who eventually finds themselves involved in a crisis, the story unfolding like it would in an RPG. It was worthy of being called “The Adventures in the World of Mario”.

S Takahashi: The story turned out completely different to what we initially envisioned (laughs).

H Takahashi: The writers got sick of writing the same story RPG modes in previous Mario Golf and Mario Tennis games where you raise a character who had their sights set on winning a tournament (laughs).

S Takahashi: I bet players were thinking the same thing.

H Takahashi: Regular golf games wouldn’t have you fighting a boss, but if it’s Mario Golf, wouldn’t you want to? (laughs). The element of surprise is one of the things that makes Mario Golf great. It can get a bit unusual and hopefully people enjoy that. If people come away enjoying the story, I think that’ll make the writers happy, too.

S Takahashi: … Although it is a golf game, it also serves as a thorough tutorial of how to play the game. It’s great as a golf game, and for us, we tried to make something that doesn’t run counter to what you’d do in real golf.

H Takahashi: I hope we can play a part in getting children and their parents interested in golf.

With every Mario sports game that Camelot makes, some characters become playable for the first time. Could you talk about the new characters in this game, Pauline, Chargin’ Chuck and King Bob-Omb?

Saito: The first thing we think about with new characters is how easy they’ll be for new players to use. We wanted to add Pauline as the human character who can hit well, which was a continuation from Mario Tennis Aces. Pauline has a chic, golf enthusiast vibe about her and was the character landed on first… As for Chargin’ Chuck, I just really like him (laughs).

Saito: The thought of taking an American football player and having them run around a golf course is really funny, so we picked him. We specifically chose him because of the way Speed Golf works.

Saito: As for King Bob-Omb, at first glance he may not seem like the golfing type… but we wanted to add someone unexpected. It left quite an impact! King Bob-Omb turned out to be an incredibly interesting character and we’re really grateful to Camelot for making him.

H Takahashi: Thanks to him being chosen for the game, we were able to make use of King Bob-Omb in the last part of the opening cinematic. We’re thankful you chose such an unexpected but great character.

S Takahashi: Speaking for Camelot, players of our games expect us to come up with new characters. We proposed characters for this game that hopefully won’t fall short of those expectations. I’m praying we don’t run out of steam next time (laughs).

On the character select screen, there’s open space at the bottom…

Yamamura: Once the game is out, we’ll be releasing free updates for the game with courses and characters, so please look forward to that!

Waluigi’s got swagger, and Bowser Jr. ditched his bib for golf clothes. Can you talk a little bit about the fashion choices in the game?

Yamamura: Generally speaking, the golf wear was made through a combination of Nintendo and Camelot designs. We paid particular attention to the human characters. As an example, characters like Mario and Luigi should be wearing authentic golf clothing in golf games.

The excellent fashion sense from Mario Tennis Aces found its way into this game, too.

Yamamura: Even if you put Mario in the center of the boxart, if it doesn’t look like a golf game, people won’t know what the game is about. On the other hand, you need variety, so we also used classic denim knickerbockers for some characters too. If you were to line up the whole cast, it paints a wide and balanced image of golf.

What about Wario and Waluigi?

Yamamura: The two of them have a slightly wild but unique fashion sense, don’t they? Wario and Waluigi were passed on from Camelot and I don’t have any particular objections to them (laughs).

S Takahashi: Wario and Waluigi always end up at the butt of jokes, don’t they? (laughs) It’s almost funny how smug they are… We wanted to make their outfit a talking point, so we made it different to everyone else’s. It’s a golf game though, so we wanted to make it as outlandish as possible while still making sense in the context of the game. I don’t think Waluigi will get offended no matter how the players play.

S Takahashi: If it looks like he’s upset, the player might apologize to him. I think it’s better we made him with that more relaxed vibe, it creates a more fun atmosphere for players. As for Camelot’s approach, you can see the fruits of many different opinions, including those from Nintendo’s, but there are still many points that are hard to see.

Where can you see that?

S Takahashi: Things like the designs on the soles of the golf shoes and clubs. Those are the things that really capture the interest of golfers. Honestly we can smooth over just about any design, but I hate the idea of making something that looks foreign to real golfers. We’re very particular about what we make. You can’t really when your character swings, but it was something we painstakingly made and we’d be really happy if people noticed it.

Yamamura: Please keep your peeled for details as minute as shoe soles (laughs).

HHA. Takahashi: I hope people all around the world will give this game a try. Pro golfer Tiger Woods can’t actually play golf at the moment due to an injury, I hope he’ll play the game… I would personally love to be told “This is golf! These guys really get it!” That’s what I dreamed when the game launched (laughs).

S Takahashi: When you said it’s been a long time since we released something it made me think huh, I guess it has been that long (laughs). I think we were able to make something that feels like a new chapter, a new Mario Golf. We took on all sorts of new challenges with this release. I’d be thrilled if people come away from this game thinking it feels like real golf. That’s the thing that we as developers hold dearest. Whether it’s as a video game or golf, we hope people will give it a shot.

Yamamura: We made a full-blown golf game, one you can play for hours on end. On one hand, it’s a game with a wide audience appeal that can be played casually. If you’ve never played Mario Golf before, or even if you’ve never picked up a golf game before, I hope you’ll pick it up as a Mario game and find it fun.

Saito: There are many people who want to go out and play golf but due to the ongoing circumstances are unable to. I’d love it if those people enjoyed the game as well and used the online functionality to make more golf friends.

In case you missed it, you can check out the first half of the Mario Golf: Super Rush developer interview translation here.