Mario Kart 8 Deluxe producer on the new Zelda: Breath of the Wild update 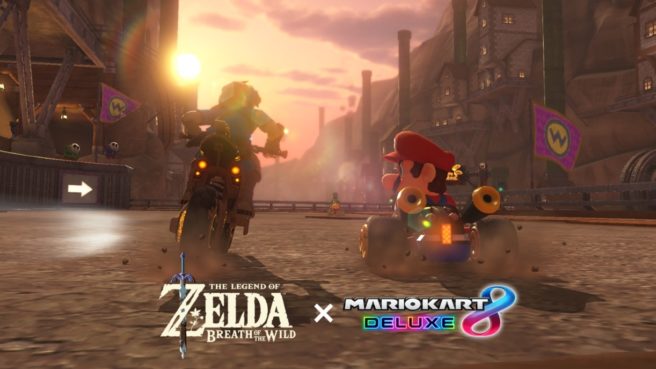 Mario Kart 8 Deluxe unexpectedly received an update a few days ago. After downloading the latest data, players can ride on the Master Cycle Zero using Link from Zelda: Breath of the Wild.

Producer Kosuke Yabuki shared a message about the new update a few days ago. If you’re interested in reading the full translation, continue on below.

Hello everyone, this is Kosuke Yabuki – producer of Mario Kart 8 Deluxe – speaking.

Starting today (July 20th), you can now play as Link from The Legend of Zelda: Breath of the Wild (in his Champion’s Tunic) as well as ride his “Master Cycle Zero” in Mario Kart 8 Deluxe!

Whenever Link performs a jump action in-game, he’ll brandish the familiar Guardian Sword++ as well as utilize his well-known paraglider! And while of course the “Master Cycle Zero” is a bike, you can choose to use its corresponding kart form as well.

The “Master Cycle Zero” is a trail bike that Link used to ride freely through the wilds, and can execute powerful drifts and jumps, even when underwater!

Much of the Mario Kart development team – including myself – has also spent time working on developing titles for the Zelda series too; likewise, members of the Zelda team have also worked on Mario Kart. A lot of us are friends that see each other around the same floor on a daily basis!

One day – about a year ago – Mr. Eiji Aonuma came to me with a thought. He said: “I’m thinking about putting a bike in Breath of the Wild, what do you think?” I promptly replied: “Riding around that world on a bike would be the best, go for it!”

Just dropping a bike into the world of Hyrule wouldn’t be an easy feat, though. There were a lot of things to consider: making sure the player could feel the tires’ traction, making the engine sound powerful, and even designing the bike to make it feel like ancient technology! The development team faced a great deal of challenges, for sure.

After playing The Champions’ Ballad – Breath of the Wild’s second DLC expansion – I felt that the “Master Cycle Zero” would be a perfect fit for Mario Kart 8 Deluxe!

To fit with the variety of terrain that the game’s courses offer, such as the anti-gravity sections in which the player drives on ceilings, walls, and the like, we re-appropriated the bike’s mechanics and appearance.

As developers of both Breath of the Wild and Mario Kart 8 Deluxe, it’d fill our hearts with joy if you – the players – would continue to enjoy both games for years to come!