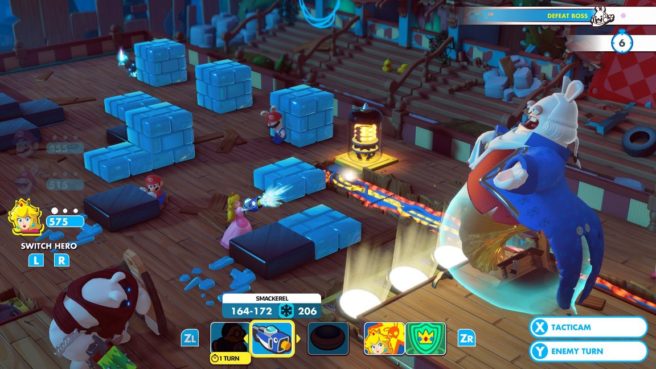 – Mario + Rabbids’ local co-op mode ups the squad size to four and lets two players take on a series of increasingly difficult challenge battles
– The bulk of the game sees you choosing a three-person squad (always Mario with two others)
– Take them into cordoned-off combat zones, then use a combination of movement, stat-heavy combat and special abilities to fight off an opposing force
– There doesn’t appear to be any ability to revive a downed squadmate
– The game’s combat areas aren’t just disconnected maps, but part of distinct worlds
– Areas include a lush garden, an ice-covered desert, a ghostly-themed area, and a volcano’s innards
– Each combat area has a single, seamless set of challenges
– Combat missions with different objectives
– Missions include defeating whole enemy forces, or reaching an end-zone
– Game has puzzle areas that require no combat
– Boss battles require bespoke tactics to beat
– First world takes 2-3 hours to complete
– Each world takes longer
– Every combat area is turned into a more difficult challenge objective once completed
– Game puts a huge premium on movement, particularly as a team
– Characters can technically only move once a turn
– By using both friends and enemies, that single move can be prolonged
– Running into an enemy performs a Dash melee attack that offers an extra spurt of movement afterwards
– Some characters can Dash multiple times, meaning you could attack three enemies, run through a Warp Pipe (another extra burst), run up to a squadmate, Team Jump (an extra-long bonus move) into cover, then fire again at the enemies you already hit
– Different character abilities
– Luigi has the Steely Glare ability that allows him to take extra sniper shots at any enemy moving past him
– Rabbid Yoshi has a move that scares enemies into moving during your turn, setting up Luigi to take extra shots
– Heroes differently to different situations, right down to how they take cover
– Rabbid Mario’s got a toothpick-chewing swagger, Rabbid Luigi is clumsy, Rabbid Peach has pathological sass
– The camera regularly zooms in and out, by turns picking out cinematic little details, then swooping up to turn the whole stage into a tilt-shift toybox
– Second level is from late in the game, called Spooky Trails
– Peach and her fire shotgun, a lethal close-quarters weapon that, if it doesn’t kill, leaves your enemies with a nasty burn
– It’s devastating power causes enemy Rabbids to scatter around the map holding their burned behind
– Enemies have intelligent AI and can outthink and outflank you with ease
– Local co-op mode puts you and a friend in charge of a pair of fighters each
– Easy mode included that heals your squad and boosts their HP count by 50% at the start of a fight