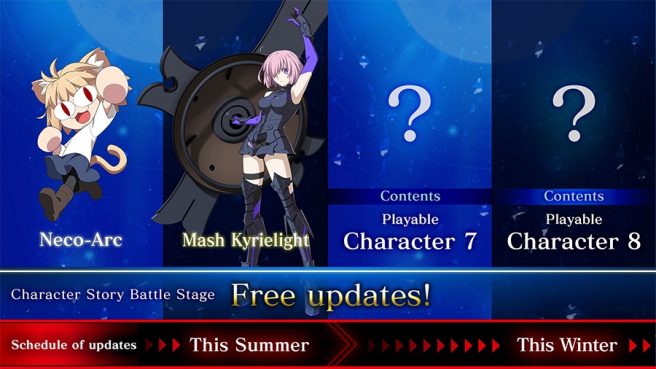 Original (7/31): Neco-Arc and Mash Kyrielight are joining Melty Blood: Type Lumina as new DLC characters, Project Lumina and French-Bread announced today. Both will be available this summer with new character stories and battle stages at no extra cost.

Here’s some information about both, along with trailers:

Neco-Arc is a unique character that disrupts the battlefield with highly-random moves, using a wide variety of tricky moves in battles. Luck is key to victories for her, and she can use powerful moves or summon helpers when it’s on her side! Both her player and opponent will have to adapt to suddenly-shifting circumstances. She has limited reach, so it takes some ingenuity to land attacks on opponents. Battles will come down to playing the field as it becomes more lively with hordes of cats or attacks by her friends. Keep an eye out for her comedic moves, which include lots of humorous elements!

[Info]
"Neco-Arc" will be available for free as a new playable character in "MELTY BLOOD: TYPE LUMINA"!
He will be available soon along with character stories and battle stages!
Please look forward to further news!
Buy now→https://t.co/KA7n32BbAC#MBTL pic.twitter.com/HTEsy0Qkmw

Mash Kyrielight is an in-fighter who uses her “Round Table Shield” in battles. Mash has a lot of straightforward, simple-to-use moves and standard tools, making her an ideal character for fighting game beginners. Many of her moves involve blocking with her massive shield while charging, making her excel in a battle style that can close gaps and take the offensive even against resistance. Her massive shield is also powerful on the offensive, and has a decent reach. Her moves have various effective distances, making her approach powerful when used properly.

[Info]
"Mash Kyrielight" will be available for free as a new playable character in "MELTY BLOOD: TYPE LUMINA"!
He will be available soon along with character stories and battle stages!
Please look forward to further news!
Buy now→https://t.co/KA7n32BbAC#MBTL pic.twitter.com/u81cQe7VOU

While Melty Blood: Type Lumina is adding Neco-Arc and Mash Kyrielight soon, there’s even more support planned for the game. Another two characters will be appearing sometime this winter.

It’s also been announced that Melty Blood: Type Lumina is having a sale. Until August 16, the game can be purchased for 35 percent off on the eShop.

Update (8/8): It’s now been announced that Neco-Arc and Mash Kyrielight will be released for free on August 19.