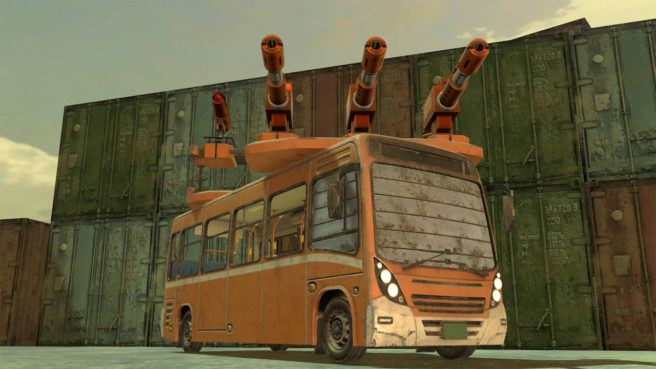 Kadokawa Games has shared another update on Metal Max Xeno: Reborn. The latest details and screenshots cover tank modification as well as a few vehicles in the game – the Wild Bus, PLT-01, Li’l Squirt, and Wolf.

1. Light the Flame of the Hunter Spirit!

– Fixed weapons have been done away with entirely
– Freely customize up to five weapon slots
– The turrets for every tank you acquire can be customized with any weapon you like
– Up to five unlockable and modifiable weapon “slots”
– Since “fixed” weapons have been done away with entirely, you can freely equip the tanks you acquire with whatever weapon you like
– Although tanks are already equipped with open weapon slots, you can change the slot type or create slots in locations were no slots exist

– Reinforce your tank’s defense power to match your preferred style and reduce its weight
– While you can increase your tank’s defense power, can also try to reduce its weight to be able to equip more weapons
– Modify the chassis itself to match your preferred style
– By reducing the weight of the chassis, you can go from machine guns-centered small weapons to an attack-specialized Monster Buggy equipped with heavy weapons such as S-E (special equipment)

2. Introduction to Three Tank Types and the “Wolf”

– “Tanks” are the steel companions the Metal Max series cannot do without
– To survive in the harsh century’s end world of Metal Max Xeno: Reborn, where powerful monsters roam freely, Hunters must understand the characteristics of each tank, master their control, and modify them with enhancements
– Three types of tanks introduced, as well as the Metal Max series’ signature tank, Wolf

– Has a strong style plated with iron in the front chassis
– The glass-free windows on the side and rear enhances the century’s mood of the vehicle
– One of the few general vehicle type chassis
– Its movement speed and evasion ability are among the best in appearance models
– Features a defensive power relatively strong for a lightweight class
– Utilizing its high potential can lead to unexpected roles for this vehicle, such as equipping heavy weapons to the unique turrets above the vehicle, making it a lightweight class with the ability to launch an instantaneous onslaught

– High-performance, middleweight tank
– Modeled after a real-life, next-generation tank being developed in a certain country
– Its stylish scientific weapons are a fine match for its elegantly curved and beautiful chassis
– By utilizing the basic performance and high modification potential appropriate for its next-generation title, it will undoubtedly become a steadfast attacker that can survive long battles from start to finish
– Equipped with scientific weapons such as beams

– Can be obtained by defeating the superdreadnought class, tank-type monster of the same name
– Its large body covered in armored tiles make it a true mobile fortress
– When you first acquire it, its double engine-converted chassis will feature many powerful weapons
– By improving its defense power to the maximum through tank modification, it will become an iron fortress that can sustain the battlefield until the very last moment with steady firepower
– Li’l Squirt is one of the game’s “Wanted” monsters

– Modeled after the Merkava mkII
– This is the Red Wolf tank nicknamed the “Scarlet Revenger”
– The Wolf has appeared in the Metal Max series since the very first game
– Unlike the original Metal Max Xeno, this is not the player’s initial tank in Metal Max Xeno: Reborn; it is instead obtained in the middle of the game
– Wolf has prominent modification potential even among middleweight tanks
– All-purpose type that allows various different modification patterns, from swift attacker to endurance fighter
– Can modify it to match the abilities of its passengers and other tanks
– Wolf will undoubtedly become your ace in the hole against the much more powerful monsters that appear in the latter half of the game