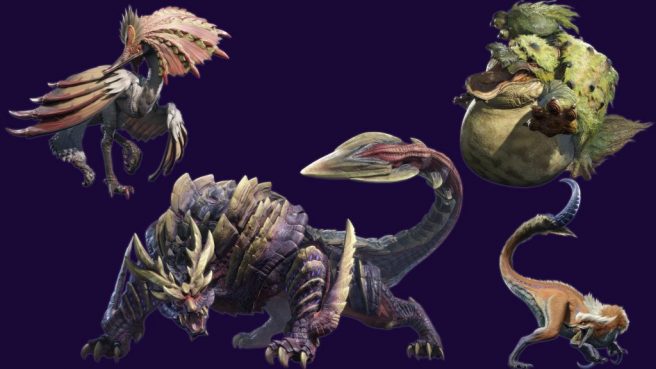 Capcom has published a new Monster Hunter Rise developer interview with Yasunori Ichinose, the game’s director. Ichinose spoke about a few different topics including the fan response. Interestingly, he was “a bit worried” about how people would react since Rise “has a very Japanese/Asian-flavored setting”.

Shibata: I’m sure you got a lot of fan feedback after Monster Hunter Rise was announced. Was there anything in particular that caught your attention?

Yasunori Ichinose: I was happy to see the response to the Palamutes was extremely positive, not just in Japan, but overseas as well. A lot of people asked to what extent you can customize your trusty Canyne.

We already revealed this information, but in case you missed it: you can change the shape of their ears and tail, and the color of their coat. We hope you create your own unique Palamute and treat it with as much affection as you would your Palicoes!

I’ve been using my own customized Palamute for checking the game, and it’s grown on me a lot.

I’m playing with a yellow Palamute and a green Palico. I love hot dogs, so I colored them after my favorite condiments: mustard and pickle relish!

We received a lot of reactions to the Buddies, but the monsters were very popular as well.

We introduced 4 new monsters (and a few others): Magnamalo, Aknosom, Tetranadon, and Great Izuchi. We only showed their names and what they look like, but people came up with lots of speculation for each creature and it’s all been really interesting to read.

I’ve seen a lot of fan art on social media as well, which makes all of us working on the game very happy. Thank you, everyone!

This game has a very Japanese/Asian-flavored setting, so initially I was a bit worried what kind of response that would elicit, but people reacted very positively to this as well, so we’re all very satisfied.

We want to create something new while maintaining the core Monster Hunter experience, so we hope you look forward to future information.

S: In Multiplayer, each hunter will be able to bring along 1 Buddy, for a total of 4 hunters and 4 Buddies. This means you’ll be able to take on monsters with a group of 8 characters at maximum, but will monsters actually attack all hunters and all Buddies?

Buddies will be attacked as well, but not quite as often as hunters.

S: Does the difficulty of the quests get adjusted to the number of players in Multiplayer?

YI: Yes, it does. We’ve looked at past titles for reference and tweaked the settings to fit this game the best.

S: Can you explore the locales without objectives or a time limit?

YI: Outside of the regular quests, we have some quests that allow you play without a time limit as well, so if you want to focus on exploration and gathering materials instead of hunting, you can do that to your heart’s content.

S: Thank you. I still have plenty of other questions, but I think we have to call it a day for now!