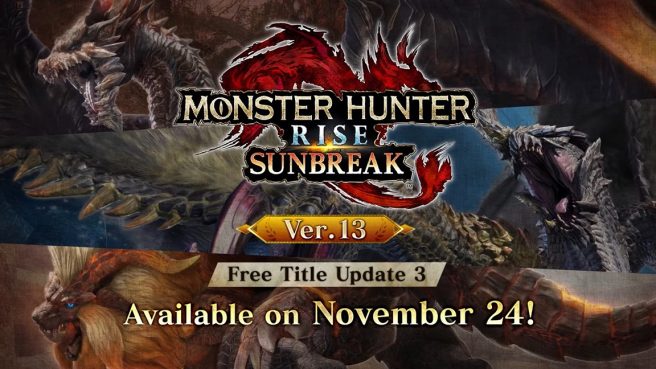 Ahead of its release later this week on Switch, Capcom have released full patch notes for the next Free Title Update for Monster Hunter Rise: Sunbreak. As expected, this brings with it a large number of adjustments, fixes, and quality of life improvements, alongside the new content previously announced. The size of the patch will be 0.7GB total. Full details can be found below:

New System Elements
Followers can now accompany you on more types of quests.
New options have been added for Followers that allow you to customize their Wyvern Riding and item use behavior. These can be accessed under Options → Game Settings.
New Guild Card titles have been added.
A new Badge of Heroes has been added.

Great Sword: Fixed an issue where using a True Charged Slash (chained from a Strongarm Stance successfully) to explode a Large Barrel Bomb would result in more explosion damage than intended.
Sword & Shield: Applying Destroyer Oil now also restores some sharpness (in addition to its current effect).
Sword & Shield: Fixed an issue with the timing of chaining a Rising Slash into a Roundslash, where using the button assigned for a Roundslash would mistakenly chain into a Lateral Slash or Shield Attack instead.
Dual Blades — Spiral Slash: Attack power slightly increased; elemental scaling slightly increased.
Dual Blades: Fixed an issue where the hellfire from Hellfireblight would stay on the player instead of transferring to the ground after using Spiral Slash too close to the targeted monster.
Dual Blades: Fixed an issue where the correct voice lines would not play when using Spiral Slash.
Dual Blades, Hammer: Fixed an issue where the skill Intrepid Heart would not properly activate if you were hit right after the Dual Blades’ Shrouded Vault move animation finishes, or if you were hit right as the Hammer’s Water Strike animation begins.
Hammer — Dash Breaker: Attack power has been slightly increased. Also, performing a charge right before Dash Breaker ends will start you at max charge instead of continuing from your previous charge level.
Hammer — Silkbind Spinning Bludgeon: Attack power increased; elemental scaling slightly increased.
Hunting Horn: The Sharpness Extension melody effect now also restores some sharpness upon activation.
Gunlance — Ground Splitter: Effect duration increased; Wirebug Gauge recovery speed increased.
Gunlance — Hail Cutter: Wirebug Gauge cost changed to 1; Wirebug Gauge recovery speed changed to Medium.
Gunlance — Ground Splitter: Fixed an inconsistency between the player animation and the duration of the blowback negation and damage reduction effects that would occur after successfully hitting a monster with Ground Splitter.
Gunlance: Fixed an issue where the forward movement of Bullet Barrage would cause Large Barrel Bombs and Mega Barrel Bombs to explode at unintended times.
Gunlance: Fixed an issue with the timing of chaining a Lunging Upthrust into a Quick Reload and finally an Overhead Smash, where using the button assigned for an Overhead Smash would mistakenly chain into a Shelling instead.
Insect Glaive — Awakened Kinsect Attack: Adjusted the attack power values for each number of extract colors consumed, as below:
One Extract Color: Attack power slightly increased
Two Extract Colors: Attack power slightly increased
Three Extract Colors: Attack power increased
Heavy Bowgun — Crouching Shot: Adjusted as follows:
The recovery speed of the overheat gauge has been increased.
Overheat duration has been decreased.
Normal Ammo 1–3, Pierce Ammo 1–3, Flaming Ammo, Water Ammo, Freeze Ammo, Thunder Ammo: The interval between rapidfire shots has been decreased, and the total number of shots has been increased.
Dragon Ammo, Piercing Dragon Ammo, All Status-Effect Ammo Types 1–3: The interval between rapidfire shots has been decreased.
Heavy Bowgun: Fixed an issue where the skill Intrepid Heart would unintentionally activate after a counter is successfully triggered when taking a hit during the crouching portions of Counter Charger or Counter Shot.
Reduced some of the issues involving certain weapon sound effects not playing correctly when too many other sound effects play at the same time.
Fixed an issue where the skill Redirection would prompt a chat log message even if the skill effect has not been triggered, which could happen when hitting a Lampsquid or other endemic creature while performing a Switch Skill Swap.
Fixed an issue where the effect durations for Gourmet Fish and Immunizer could be unintentionally overwritten by shorter effect durations (like from the skill Wide Range).
Fixed an issue where receiving a blowback hit when you are afflicted with Hellfireblight and have a blowback negation effect active would cause all subsequent Hellfireblights to explode even when receiving hits that wouldn’t cause blowback (the intended behavior is that only blowback hits would cause the Hellfireblight explosion).
Fixed an issue introduced in Version 12.0.1 where the icon for Defense Down would sometimes display at incorrect times.
The color flashing effects of different parts of the health bar have been made easier to tell apart when the Bleeding status is active.
Fixed an issue where curing the Frenzy status activated by the skill Bloodlust with an Antidobra would ignore the size of your red health gauge and restore more health than intended.

Fixed an issue where the player would be sent back to the base camp after a fadeout when trying to move to the combat area in the Yawning Abyss or the Forlorn Arena.
Fixed an issue where other players would be forcibly kicked from a session when harvesting afflicted materials at the small isolated island in the Jungle.

New augmentations have been added to the Smithy, so the specs for randomization have been adjusted accordingly (including for existing augmentations).
Added a feature when augmenting armor at the Smithy to convert surplus points into items.
When performing multiple Melding—Rebirths or Melding—Reincarnations in succession at the Market’s melding pot, the cursor position will now default to the next Talisman after the one you last selected.
Fixed an issue where the Toadversary at the Training Area would have different stats depending on which quest the player has currently accepted.
Fixed an issue where it would take a long time for anything to be displayed when using the equipment box if you have a large number of Talismans.
Fixed an issue where the sort order would be incorrect when opening the equipment box via “Set Decorations” and searching for equipment that only has a Rampage Decoration slot.
Fixed an issue where a Kinsect saved to a loadout would be displayed in a preview when selecting “Layered Equipment Loadouts” from your Equipment Sets and moving to the list of loadouts.
Fixed an issue where different messages would be displayed depending on which screen the player is on when trying to select a layered equipment loadout containing a different weapon type.
When searching for Anomaly Investigations to join on the Quest Board, you can now choose whether to save the search criteria or not.
When searching for Anomaly Investigations to join on the Quest Board, the minimum level will now no longer be reset with specific timing.
Fixed an issue where some categories would not be reset when searching for Anomaly Investigations with specific criteria on the Quest Board and then returning to the “Responding to Join Requests” screen without saving.
Added Fire Herbs, Flowferns, Thunderbugs, Snow Herbs, and Dragonfell Berries to the lineup of Trade Goods at the Argosy.
Increased the number of Fire Herbs, Flowferns, Thunderbugs, Snow Herbs, and Dragonfell Berries that your Buddies will bring back when using “Order Items” at the Argosy.
Added more types of rare materials, armor spheres, jewels, and melding solutions that can be exchanged at the Anomaly Research Lab.
Adjusted some of the unlock conditions for items that can be exchanged at the Anomaly Research Lab.
Fixed the design of the lamps at the canteen to match those of Kamura Village.

When setting a shoutout or a sticker to the Action Bar or a shortcut, the text will now be displayed at the top of the screen.
Fixed an occasional issue preventing active skills from being displayed when opening the Status screen while you have augmented armor equipped.
Fixed an issue preventing the cursor from being moved on the second page when selecting the item pouch via an item shortcut on the Radial Menu.
Fixed an issue that allowed the Great Wirebug Medal award to be obtained even when the conditions have not been met.

Fixed an occasional issue where Jae would speak Japanese when the language settings are set to “Monster Hunter Language.”
Fixed an issue where the Stamina Gauge wouldn’t blink if you drink a Dash Juice or get hit with Waterblight while having the Health & Stamina Gauge display settings set to “Dynamic.”

New monsters
Chaotic Gore Magala
Risen Teostra
Risen Kushala Daora
Anomaly Research Quests
New monsters, including Risen Kushala Daora!
A7★ quests are now available! Anomaly Investigations now go up to Lv. 200!
New features for Qurious Crafting!
adds ability to boost the Shelling Level for Shelling Lv 6 or Lv 7 Gunlances in Qurious Crafting (the maximum is Lv 8)
Follower Quests
You can now take Followers with you on almost all Master Rank quests, including Anomaly Quests and Anomaly Investigations.
adds ability to adjust various settings for your Followers, such as whether or not they perform Wyvern Riding when in the same or other areas as you, whether they set traps, and more
adds a feature that will give you upgrade materials back in exchange for leftover upgrade points you have after upgrading your armor through Qurious Crafting in the Smithy

The next free title update for Monster Hunter Rise: Sunbreak will be available from November 24.