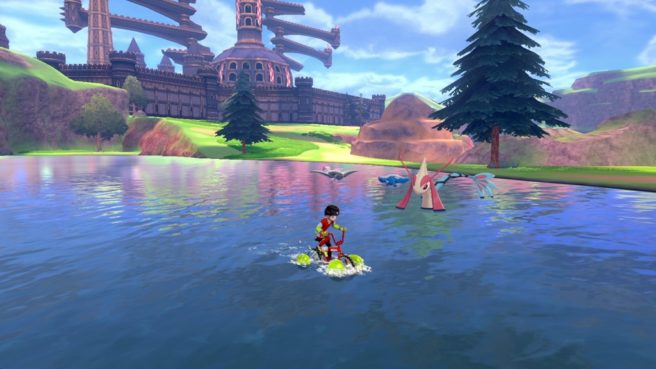 The Wild Area in Pokemon Sword and Shield lets players walk right up to any Pokemon they see on screen for a battle. As we heard previously, some of these creatures could be at a much higher level than anyone in your party.

USgamer reports that after stepping into the Wild Area for the first time, “you quickly come across Pokemon who are ten or fifteen levels above you” and are known as as “very strong Pokemon.” If you attempt to catch one, you’ll be told that’s not possible. However, you can take them down and earn a significant amount of experience. They also “respawn quickly”.

As for shiny Pokemon, USgamer shares the following:

This catch limit exists for the same reason high-level Pokemon you receive from trades won’t listen to you until you have enough Gym badges. Namely, Game Freak doesn’t want you to sweep the early game with an Onix that’s 15 levels higher than the surrounding wildlife. However, there’s no need to fear coming across a super strong shiny Pokemon you can’t catch: these “very strong Pokemon” aren’t random spawns. They’re anchored to a certain part of the Wild Area, and they don’t seem to come in shiny varieties. Note that lower-level Pokemon spawn in the tall grass, whereas very strong Pokemon tend to hang out in the open… If you want to hunt for shiny Pokemon, just stick to the grass as per usual.