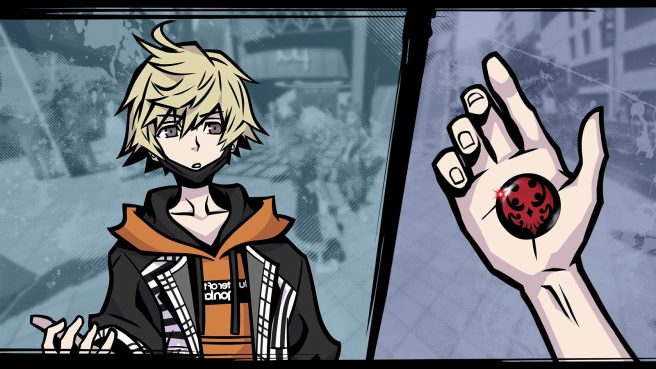 Square Enix has prepared a new batch of details and screenshots for NEO: The World Ends with You. Today’s update covers the game’s story, characters, locations, music, Replay and Pins systems, and enemies.

– It was just another seemingly ordinary day in Shibuya, but not for Rindo
– He could tell something about the city felt different
– He soon finds himself caught in the telekinetic crossfire of a psychic battle unfolding in the Scramble Crossing
– Before he can catch his breath, a girl with an ominous aura appears before him and welcomes him to the so-called “Reapers’ Game”
– With some trepidation, Rindo and his friend Fret play along, convincing themselves that a “Game” couldn’t have any serious consequences
– It isn’t long until they start having second thoughts
– The boys’ confusion is compounded by fear when they learn the first rule of this Game: if you don’t win, you cease to exist altogether
– Dead set on returning home, they must now compete against other Players in a battle for survival in Shibuya’s Underground (or “UG”)

– One of the newest Players in the Reapers’ Game
– High schooler to whom searching for info on his phone is second nature
– Prefers to go with the flow
– Although he doesn’t go out of his way to interact with others, he won’t turn them away if they come to him first
– Thrust into the Game without even realizing it, he now serves as the de facto leader of the Wicked Twisters

– Rindo’s happy-go-lucky classmate and fellow Player in the Reapers’ Game
– Boasts the ability to get along with just about anyone
– Styles himself as a natural conversationalist, but prefers to keep things light, subconsciously avoiding subjects that are too serious
– Enjoys walking around town with his buddy “Rindude”

– Another Player in the Reapers’ Game
– College student whose youthful appearance leads others to mistake her for a middle schooler
– She is deeply passionate about her pastimes, devoting all of her time and energy to her favorite games
– Highly perceptive,
– Acutely aware of others’ emotions, and shows disdain toward those she deems superficial and disingenuous

– A fellow Player in the Reapers’ Game, Minamimoto puts his impressive psychic powers to use when he saves Rindo and the gang from a tight spot early on, then forces himself onto their team
– Calculates every possible future using his own unique formulas and acts in accordance with the values he discovers
– Remains a mystery to all around him
– Seems to have his sights set on something greater than Rindo and the gang

– Currently ranks number one among the Reapers in the Shibuya UG, having worked his way to the top within a year of his arrival
– Serves as the Game’s Master, arbiter of its rules, and encourages its Players to keep things hot
– His psychic powers far surpass those of his fellow Reapers, ensuring that none dare disobey him

– One of the Reapers in charge of managing the Game
– Less than enthused with her job of monitoring the Players
– Having grown bored of the Game in its current state, she not-so-secretly hopes someone will come along and shake things up, showing open disdain toward Players who are slow to learn the rules
– The hoodie she wears is a signature piece from Gatto Nero, a new brand that has recently taken Shibuya by storm

Despite his veteran status among the Shibuya Reapers, Kariya has no career aspirations, content with working among the rank-and-file Reapers. Though he used to work alongside Uzuki, the two operate separately at present. Never seen without one of his trademark lollipops.

– Although her mind was once solely focused on getting ahead, Uzuki seems to have outgrown her previous ambition for some reason or another—but her short temper hasn’t changed a bit
– She used to work with Kariya, but currently she operates alone

– Game takes place in Shibuya, Tokyo
– You may recognize some of the landmarks, but the city itself is depicted with an artistic touch unlike anything you’ve seen before
– Spain Hill, 104 Building included

– Takeharu Ishimoto, who composed music for the previous game, working on the soundtrack
– New songs and rearranged tracks from The World Ends with You, including Twister and Calling

Key Item: Reaper Pin – The Key to the Reapers’ Game

– Reaper Pins serve as proof that one has been approved to take part in the Reapers’ Game
– These grant Players the ability to telepathically Scan their surroundings and educe some of the wielders’ own latent psychic powers
– Upon obtaining Reaper Pins of their own, Rindo and the gang are swept into a battle for their lives

Game System: Replay – Replay the Past to Change Your Fate

– Each member of the Wicked Twisters possesses their own unique psychic powers
– Rindo boasts the ability to turn back time within a given day, allowing him to alter some of his earlier actions in hopes of bringing about a better final outcome
– This Replay power proves indispensable in Rindo’s efforts to survive the Reapers’ Game

– Azamaru: pin bearing the “Shockwave” psych; slash at enemies with a flaming sword, then leap into the air before delivering one final hit.
– Angelic Kick: activate the powerful “Massive Hit” psych to unleash a swift aerial kick; fully charge the attack to send your foes flying as well
– Glacial Getaway: “Piercing Pillar” psych conjures an enormous icicle beneath your foes, sometimes sending them skyward

– Players in the Reapers’ Game will face off against enemies known as Noise that come in all shapes and sizes
– These range from herds of smaller beasts to singular fiends that tower over your entire team
– Avoiding them literally won’t get you anywhere, as many missions require Players to erase Noise in order to proceed
– Felling these foes will provide powerful new pins

NEO: The World Ends with You is due out for Switch worldwide on July 27.