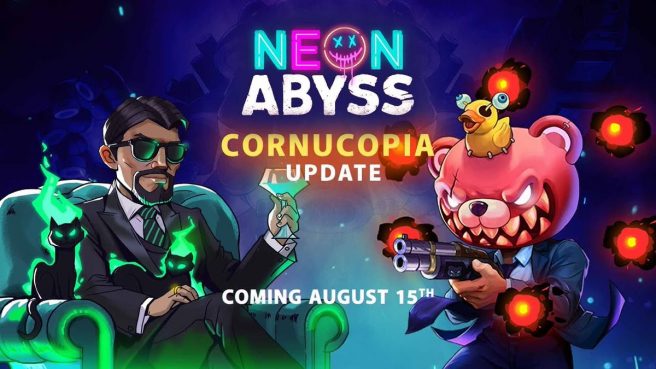 Neon Abyss has announced its next major patch known as the “Cornucopia Update”. Players on Switch can access it starting on August 15, 2022.

After installing the update, players will find that the Switch version to be in parity with the PC release. Additionally, the Chrono Trap DLC can be obtained for free between August 16 and August 30.

Here’s the full rundown on the “Cornucopia Update” for Neon Abyss:

This update will bring all content from the Call of Hades and onwards to consoles. This means:

To confirm, this update consists of all content from the Call of Hades update for PC and upwards, bringing the console versions of Neon Abyss to full parity with the PC version.

A trailer showing off the new Neon Abyss “Cornucopia Update” can be seen below.

As for the Chrono Trap DLC< it includes an Endless Mode described as "a perilous journey to your final battle against the all-powerful Chronos". It also lets players take on he new Chrono Titan in two different play modes. The Chrono Trap adventure can be accessed via a switching device at the edge of the cliff by the bar. Source