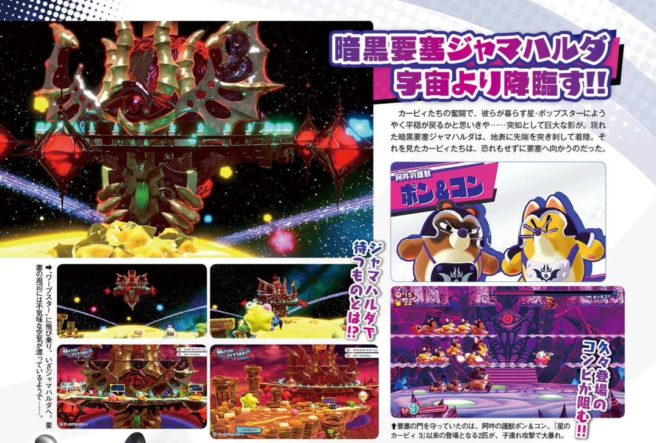 Famitsu has a big update on Kirby Star Allies this week. Aside from revealing Pon & Con as a boss returning from Kirby’s Dream Land 3, the magazine shares other information as well.

At one point in the game, after Kirby and others have fought hard, just when they thought Planet Popstar would finally return to peace… suddenly a giant shadow appears, which turns out to be the Dark Fortress Jamahalda. It sticks its tip to the surface to land. Kirby and the rest of the gang ride the Warp Star and head to the fortress without any fear, even though an eerie atmosphere surrounds it.

The fortress’ gate is being guarded by Pon & Con, who are returning from Kirby’s Dream Land 3. This time they have an attack that involves bringing along their minions.

The lone knight Meta Knight also faces Kirby at the last Popstar stage. He looks unusual this time as he is shrouded in a black aura. He can split into four bodies and attack Kirby with quick swordsplay.

One of the three Mage Generals is also introduced: Fran Rouge, a fire user. She seems to have a deep relationship with Francisca, who was defeated by Kirby previously, so she immediately considers Kirby as an enemy. She unleashes her rage with sword and fire techniques. 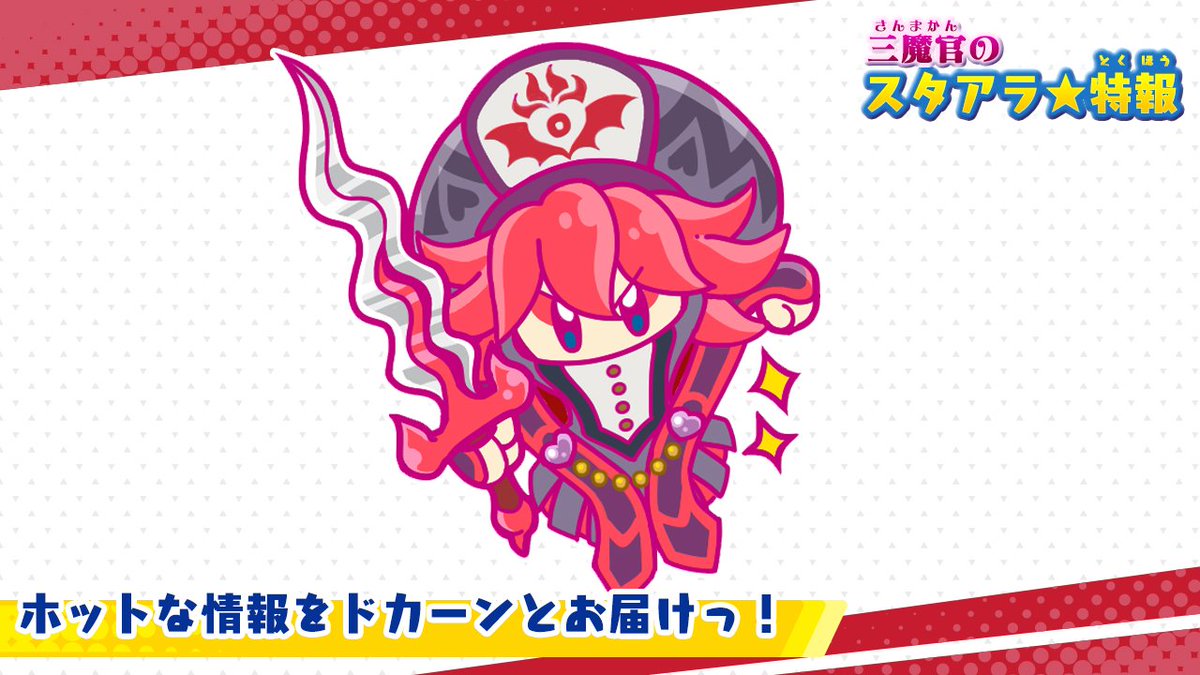 Festival is a new ability in Kirby Star Allies. With it, you can deal damage to enemies on screen with a festive dance. The more friend helpers Kirby has, the more the damage will be. Kirby can also dance with all helpers to activate the Friend Ability FestiBurn. Each helper will have its own pose.

Another new ability is Stick. This is a martial arts-based ability in which Kirby fights with a stretchable stick. It allows for a high jump, and it can also be used to move to behind an enemy. The stick is helpful in safely attacking enemies from a far distance.

Cook is returning in Kirby Star Allies, which puts enemies into the pot and cooks them into food items. If it turns into Friend Ability Boiling Pot Friends, you may even put allies into the pot.

Plasma is also a returning ability in Kirby Star Allies, and it deals more damage if charged. If given a water element, it will become a Friend Ability Splaidane which launches water spheres imbued with electricity. It can attack enemies right above Kirby with Sparking Plasma Bullet, and it also more techniques like Swift Movement and Plasma Barrier.

– Friends Crossing Bridge: friends will pile up like a totem and then fall down to horizontally; other than forming a bridge, this can also be used to let a key character cross it
– Friends Locomotive: forms a line with Friend Helpers to charge forward and mow down enemies; the locomotive can go on forever and it can even break thick walls and ceilings
– Friends Star: fire shots while riding a star and flying in the sky; The shots will change depending on the front character’s abilities.

And some Friend Abilities:

– Bomb + Wind element = Wingabomb: wielding a bomb will enable Kirby to fly
– Esper + Stone = Poltergeobje: controls allies that have been transformed to stone, can be aimed to crush enemies and rocks; some stones may also have unique shapes
– Mic + Friend Helper = Death Boy Chorus: Shouts together with allies to pierce enemies on screen

Finally, Famitsu mentions that illustration pieces are hidden all around stages. Collecting them will fill the puzzle frames in the Gallery.