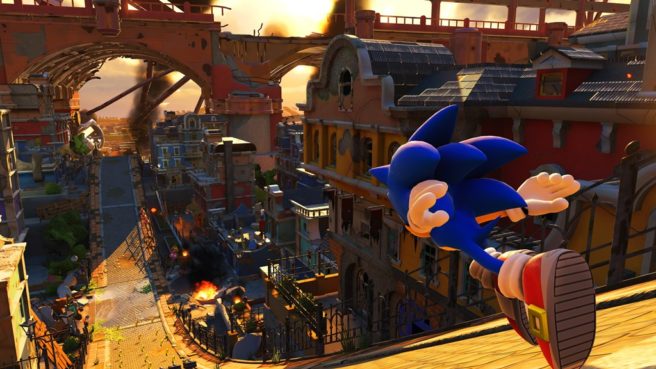 Sonic Forces and Sonic Mania are both featured in this week’s Famitsu. It’s the former title that has received more coverage with additional details.

Sonic Forces is a stage clearing-type action game in which Sonic runs around 3D areas. Progressing through fields, with not only Sonic’s own speed but also platforms like springs and dash panels, give a sense of exhilaration. Enemies that obstruct him can be destroyed by using attacks like Homing Attack and Boost effectively.

Regarding the background story: after obtaining a new power, Eggman’s army went on to conquer 99 percent of the whole world. Sonic and his friends – fellow Resistance members – stand up against the danger. Furthermore, there is one more Sonic that appears in this world.

Due to the influence from Eggman’s new power, Classic Sonic appears in this world and become partners with Modern Sonic. These two Sonics will each have different styles on the high-speed action. There is also one more style available, although the details are still unknown for now. SEGA’s Takashi Iizuka confirms that it won’t be the Sonic from Sonic Boom, however. Rather, it will be someone unexpected.

Famitsu reconfirms that Sonic Forces is using a new game engine called Hedgehog Engine 2. Light reflections and refractions can also be visualized by the engine’s physical based rendering, which improves character textures and representation of backgrounds. Sonic will look like he’s actually existing there.

Based on impressions of the alpha version, the boost system which was brought in from Sonic Unleashed will become the key in clearing stages and time trials. When playing as Classic Sonic, the gameplay will basically revert back to side-scrolling 2D action.

Morio Kishimoto is directing Sonic Forces. Probably his main highlight was acting as the director of Sonic Colors on Wii.

Finally, two more notable tidbits from Iizuka: the game will be at E3, and it has been in the works since 2013.