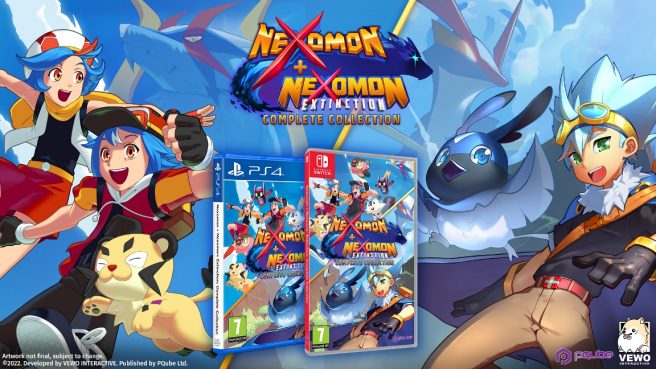 PQube is readying the Nexomon + Nexomon: Extinction: Complete Collection for Switch, the company has announced.

Both of these titles have been individually released on Nintendo’s console previously. Soon, however, they’ll be available in a single bundle. Both can be experienced together from the same launcher. A few new Nexomon creatures will also be included.

From unknown sources, we have heard that there have been some new Nexomon spotted in the wild. Keep an eye out for these new, extremely rare Nexomon in Nexomon’s upcoming post game content – which will be included in ‘Nexomon + Nexomon: Extinction: Complete Collection’!

Prismazor is a wildly popular plant Nexomon in the Nexomon community and even won a popularity contest among tamers. It not only looks impressive but also battles with incredible skill. This Nexomon is an all-rounder, and it is proven to be the go-to Nexomon for most experienced tamers.

Carnagrius – Carnagrius are not particularly fond of humans. A long time ago, humans destroyed their natural habitat making them very cautious of tamers. Although it is tough to earn a Carnagrius trust, once a tamer achieves this feat, they become inseparable.

Jeeta – Jeeta is the fastest Nexomon to date. Not a single Nexomon comes even close to matching its full speed. Jeeta uses its electrified nervous system to jumpstart its muscles like no other Nexomon. You won’t even see it coming.