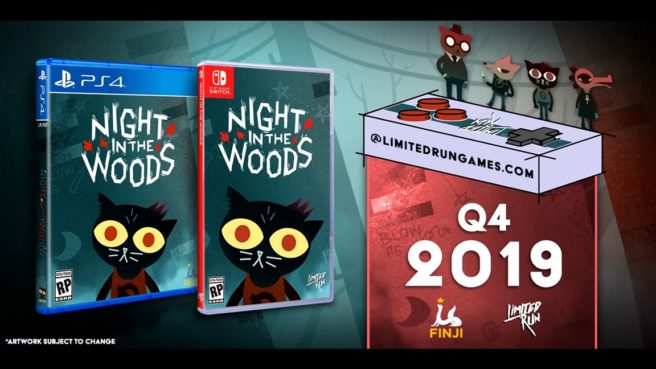 A few months ago, a physical version of Night in the Woods was announced for Switch by distributor Limited Run Games. That release, in addition to a current project from the developer of the original title, have been scrapped following abuse allegations against Alec Holowka.

Zoë Quinn came forward yesterday with a statement on Twitter, which you can read in full here. She wrote about the abuse from Holowka, who acted as a coder, composer, and co-designer on Night in the Woods.

As for Night in the Woods team, swift action has been taken. Alec will no longer be associated with the studio, in addition to the aforementioned moves affecting its other games and project.

This week, allegations of past abuse have come to light regarding Alec Holowka, who was coder, composer, and co-designer on Night In The Woods. We take such allegations seriously as a team. As a result and after some agonizing consideration, we are cutting ties with Alec.

We are cancelling a current project and postponing the Limited Run physical release. The iOS port is being handled by an outside company and supervised by Finji and will remain in development.

We’ve received a lot of emails and messages in the past few days, often very hurt and angry. That’s also how we feel. This has been very, very tough.

I should say that I’m Scott. Hello. I run this account. I was the artist, lead animator, co-designer, co-writer, and the guy who wrote almost all of that dialogue in the game. Bethany’s here too, she was co-writer and researcher.

Much of Night In The Woods is pulled pretty directly from our lives. Bethany is from a tiny valley in central PA. I’ve lived out here in Western PA for about 20 years. The characters are us, and people we’ve known. The places are ones we know.

Thousands of people have connected with Night In The Woods in a very personal way. We can’t tell you how to feel about any of this. Whatever you’re feeling is valid. Your experience with art is yours. What it means to you is yours, regardless of anything else.

Going forward, Night In The Woods will be handled by Bethany and I. We’re not sure what that all means yet. This stuff takes time.

Thanks for your support over the years. We’re sorry to even have to say any of this. That’s all I can say at the moment. Thank you for your patience.