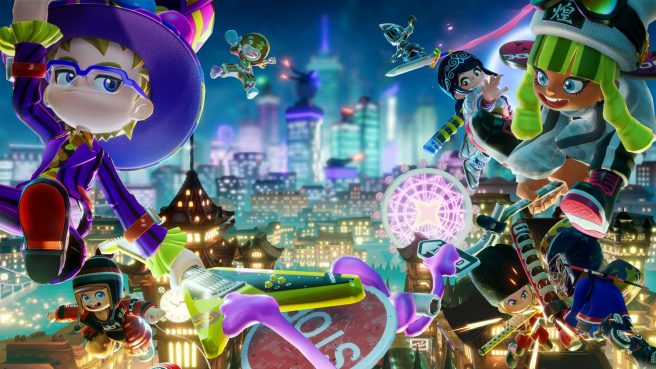 A new update has gone live for Ninjala, which introduces Season 4 for the game. It includes new weapons, a new stage, features and improvements, and more.

Below are the full patch notes and a trailer:

To read all about their parameters and actions, click here!

The new stage Fort Riverdale, with its clock tower shining beautifully in the night sky, has been added!

A visualization of Fort Riverdale can be found here.

Increase to the Disconnecting Penalty

A penalty for disconnecting after matching was already added in Ver. 3.0, but, after careful monitoring of Ranked Matches all throughout Season 3, said penalty will be increased.
We will continue to monitor the state of Ranked Matches and may make further adjustments to penalties as needed.

Due to an increase in the rating limit in Season 3, as of Season 4 your initial rating will be based on the sum of the rating assigned at the start of the Season plus your exceeded total.

Rating Assigned at the Start of a New Season

Ex: If your rating from the previous season was 8000, your excess amount is 3000 and you will start the new Season with a rating of 3800.

Rating fluctuations will continue to be unified for all team members regardless of placing as in Season 3.

・Shortened the loading time before the start of battle
・Changed the camera’s behavior in battle so it is easier to play.
・You will be able to know the stage you are playing when entering the lobby for Quick Battles and Ninjala Battles.
・Added an option in the Mobile Menu to view damage received more easily.
・When your opponent is afflicted by Gum Bind, you will easily be able to see this effect in the UI.

・Favorites can be registered separately into Equipment and Avatar.
The number of communications you can register has been increased. Communications have also been removed from favorites.
・Spectators can now host rooms.
・Added a shortcut to switch to the spectator camera.
・Made changes to the shortcut buttons in various menus.
・An icon is displayed on items that cannot be equipped with facial accessories.

・Added Ninjala Collection Cards to the Mobile Menu.
You will need to use your IR Camera to read codes or enter them manually to use it.
・Increased the number of colors in Team Battles to four.

The Ninjala development team is dedicated to ensuring that players can enjoy a wide variety of battling styles.
After careful observation of winning percentages by gum weapon and weapon popularity, we have implemented a host of balance adjustments.

Due to low victory rates, Ninja Yo-yo and Shinobi Spinner (which were balanced in a previous update), as well as Potent Poison, Baiting Shark and Gum Ghost have been powered up.

We hope these refinements will allow players to continue to enjoy diverse styles of play in Ninjala battles.

・Accelerated the occurrence of attacks when Yo-yo Leap is unleashed.

Combo damage has been increased with this adjustment, allowing you to deal much more damage to your opponent.

In addition, you will now be able to perform faster attacks with Yo-yo Leap.

As Beyond the Gum is special in its extremely powerful ability to neutralize your opponent, it was possible to easily morph your opponent’s appearance ad infinitum when used with the Time to Relax ability.

We have extended the cooldown time with this adjustment so that there is more risk after using it.

Since Overpowering Wave has many uses, such as destroying drones, attacking, and moving, its cooldown time has been shortened so that it is easier to use.

・Damage has been increased.
・Increased the speed of the rocket.

The speed of Fujiyama Rocket is currently too slow and can be easily dodged when aiming at an opponent that is far away.

We have increased the speed of the rocket with this adjustment so that you can more easily aim at opponents that are far away.

・Damage has been increased.
・Further decreased the movement speed of opponents in range of poison.

Damage was increased as it did not have as much decisive power as compared to other Gum Ninjutsu.

・Reduced the amount of Ninjutsu Gauge required to activate.
・Extended the time from when Scrolls are set to when they disappear.

The time until Scrolls disappear has been extended, so it is more likely for your opponent to be caught in a trap and they can be contained for a longer period of time.

Be sure to be careful if you see a Pop Eye at your feet.

・You can now use homing on your opponent.

・Hit reaction has been altered so that your opponent will stagger.
・You can now inflict Gum Damage.
・You can now guard with Gum Guard.
*However, you cannot guard against your S-Energy being decreased.

It was difficult to pursue an opponent after hitting them with the Gum Shoot, Gum Ghost.
With this adjustment, your opponent will stagger after being hit.
Now that you can more easily pursue your opponents, it has become more formidable.

・After its effect has been activated once, it will not activate again until it respawns.

・Fixed an issue where natural health recovery would start immediately after receiving damage under certain conditions.
– Various adjustments and bug fixes have been implemented to ensure a smooth and enjoyable gameplay experience.

* Updating to Ver 4.0 is mandatory for all players.
* To download the update, sufficient free space is required in your console’s internal storage or an installed microSD card.
* All information is accurate as of the time of posting.