Nintendo on how long Super Mario Maker 2 has been in the works, Koopa Troopa Car origins, more 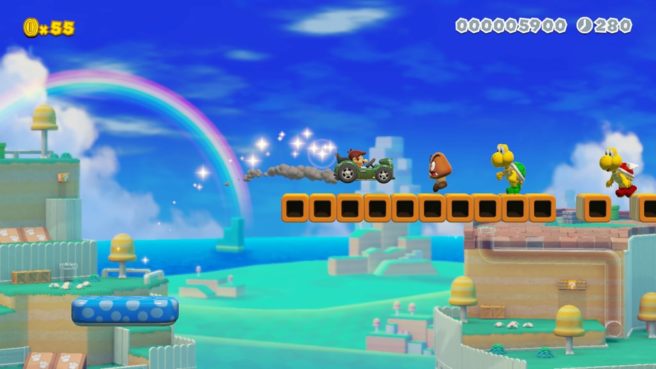 Nintendo has shared a new interview with legendary game developer Takashi Tezuka all about Super Mario Maker 2. Tezuka was asked about a few different topics, including when discussions about the sequel started, how the Koopa Troopa Car came to be, and more.

Below is the full discussion:

When did discussions about making Super Mario Maker 2 begin? What did the team specifically want to accomplish with this sequel?

I don’t remember exactly when our discussions about making a sequel began, but our development of Super Mario Maker 2, or at least our preparation for development, continued in parallel with the development of the Nintendo Switch hardware. We knew from an early stage that we wanted to make a sequel, and that the theme would be to try and do more than what we did with the first game. For us, those new ideas took the form of creating new game styles, new course parts and items to use in course making, and new modes for the “playing side” as well, such as Story Mode.

Course creation can be a little daunting to someone who’s completely new to the game. Do you have specific tips for someone who has never made a level before?

There are people out there who aren’t that interest in making courses, and we never want to force someone to make a course if they feel that way. But it’s our aim to include things in the game that might lead them to want to make courses or point them in that direction.

For example, Story Mode has more than 100 courses for people to play, and these are fully fleshed-out Mario courses like you would find in a 2D Mario game. Within these courses, there’s a feature called the Luigi Assist mode. This mode gives you a limited selection of parts that you can place in one of the Story Mode levels if you feel you’ve reached a difficult point and can’t get past it – you can use these parts to make the course easier for yourself. I hope this mode will encourage people to try out making courses.

Also, almost all of these Story Mode courses can be recreated using the parts and tools available in Super Mario Maker 2. So, we’re hoping people will play those and find their own inspiration for making courses themselves.

Is there any specific course part or item that you’re excited to see the community use?

Well, it’s not actually a course part, but this time we’ve also added something called Clear Conditions (such as needing to gather 100 coins or defeat a certain number of enemies.) By adding a Clear Condition to a course, it increases the variety of gameplay options for the specific course.

One of the wackier reveals about the game was the Koopa Troopa Car. How did this end up in the game?

[laughs] Well, first, we wanted to give Mario some sort of vehicle to ride around in, and our inspiration for that was Bowser’s car that he drove around in Super Mario 3D World. We felt it would be really difficult to replicate Bowser’s car in Super Mario Maker 2, so we decided on creating the Koopa Troopa Car instead.

Do you have any additional comments for players?

One thing I can say is that we really wanted to put our energy into creating an environment in which the players would be able to create their own courses. But if we created the environment and then no one uploaded their own courses, the game would just end up being a support tool.

So, it would be great if people created all sorts of wild and interesting courses – uploading them and receiving feedback and opinions from other players. We can then follow along and think about what sort of additions we want to include in the game going forward.

I think this game will really reach its completed “final” form with this cycle of give-and-take between the game developers on our side and the players in the community.

Also, some people may think that something like Super Mario Maker 2 is categorized as a kind of educational software [since it encourages you to make courses]. But that’s not really our intention with making the game – for us, it’s enough if we can give people the type of environment to enjoy the act of creation.