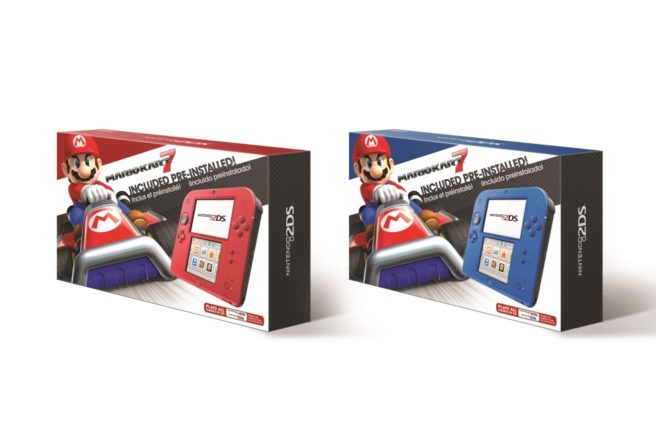 In November, Nintendo will be releasing a new color scheme for the 2DS across North America. The old look featured a black front with red/blue on the sides. However, in what Nintendo says was an “incident” caused by Luigi, the new look is red/blue on the front and black on the sides. Like other 2DS systems, it’ll cost $80.

Due to an unforeseen “incident” at the Nintendo 2DS factory, Nintendo announces that the hardware’s current color scheme will be changed. (Footage of said “incident” can be viewed here: https://youtu.be/V4JyT_fu0Bs.)

Old Look:
Black front with red or blue on the sides.

New Look (Not At All Caused By Luigi Accidentally Entering the Wrong Manufacturing Code):
Red or blue on the front, black on the sides.

This new color swap will be remembered alongside other such innovations as jelly and peanut butter, or roll and rock. Even Mario approved and decided that the new look will start replacing the old one, so everyone should see the color-swapped Nintendo 2DS systems appear in stores this November.

Despite all these changes, the price stays the same! You can still pick up the Nintendo 2DS system at a suggested retail price of only $79.99, with the Mario Kart 7 game pre-installed in specially marked packages. At a price like that, you could even pick up one for every young gamer in the family!