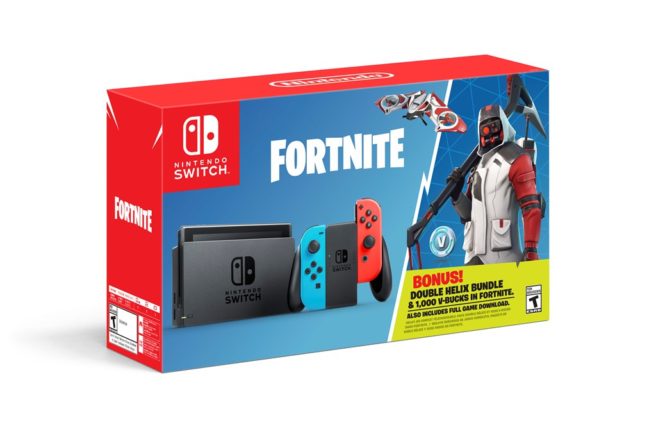 A new Switch bundle featuring Fortnite is on the way, Nintendo has announced.

Fans of the hit free-to-play game Fortnite who are looking to play the game anytime and anywhere are in for a treat. On Oct. 5, a new Nintendo Switch bundle featuring special items from the game rockets into stores at a suggested retail price of $299.99. The Nintendo Switch: Fortnite – Double Helix Bundle includes a Nintendo Switch system, 1,000 V-bucks (in-game Fortnite currency) and the Double Helix Set, consisting of a unique Character Outfit, Back Bling, Glider and Pickaxe. The included V-Bucks can be used to purchase a Battle Pass, which unlocks additional in-game content, or can be used to purchase other in-game items.

In Fortnite on Nintendo Switch, jump in to be the last one standing in a high-stakes game of 100-player Battle Royale. Build huge forts. Outwit your opponents. Earn your Victory Royale. Squad up together online with friends in the same room or around the world. Regular updates to the game add fresh gameplay modes, outfits, weapons and items to Fortnite, such as the upcoming Season 6 content