Nintendo Treehouse: Live with Zelda Wii U to be hosted on June 14 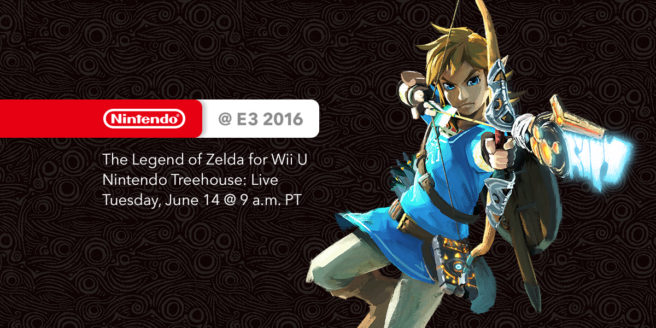 Nintendo has revealed new details about its plans for E3 2016. As previously mentioned, the upcoming Zelda game for Wii U (also coming to NX) will be featured.

Nintendo of America president Reggie Fils-Aime will introduce Nintendo Treehouse: Live on June 14 at 12 PM ET / 9 AM PT. This will be followed by “a day of live-streamed gameplay of The Legend of Zelda.” Nintendo says it’ll “be the world’s first in-depth look at the game, which will also include commentaries by Nintendo developers.”

Fans can watch the stream on Nintendo’s YouTube and Twitch channels as well as http://e3.nintendo.com. You can expect “game coverage, behind-the-scenes info and plenty of fun.”

Nintendo is hosting a competition so that one fan and a companion can play the new Zelda game on the show floor. Starting today and lasting through May 10, a Twitter sweepstakes is being hosted for a chance to win a trip to the expo. You can enter simply by tweeting @NintendoAmerica a note about what The Legend of Zelda series means to you while using the hashtags #MyZeldaLegend and #NintendoSweepstake. Visit this page for more information.

REDMOND, Wash., May 5, 2016 – Nintendo will transform its booth at the E3 video game trade show next month in Los Angeles to immerse fans in the world of the newest game in The Legend of Zelda franchise – playable for the first time ever at the show. To ensure attendees are able to truly experience the freedom of exploration the game offers, The Legend of Zelda for Wii U will be Nintendo’s focus of the show this year, and will be the only playable game in Nintendo’s booth via extended demos.

At E3 this year, we’re treating people to an immersive Zelda experience,” said Scott Moffitt, Nintendo of America’s Executive Vice President of Sales & Marketing. “By giving attendees extended hands-on time with this remarkable game, they’ll be able to get a much deeper understanding of something new for the franchise.”

Nintendo’s kickoff to the E3 show happens at 9 a.m. PT Tuesday, June 14, when Nintendo of America President and COO Reggie Fils-Aime introduces Nintendo Treehouse: Live, which will be dedicated to a day of live-streamed gameplay of The Legend of Zelda. This will be the world’s first in-depth look at the game, which will also include commentaries by Nintendo developers. The Legend of Zelda gameplay will be streamed from the E3 show floor via Nintendo’s channels on YouTube and Twitch, as well as on http://e3.nintendo.com. The stream will include game coverage, behind-the-scenes info and plenty of fun.

Series Producer Eiji Aonuma has said that this new installment in The Legend of Zelda franchise will be a clean break from the conventions of previous games, removing boundaries that forced players to follow a set path and introducing new gameplay that has not been experienced in previous games in the series.

While people everywhere will be able to watch The Legend of Zelda gameplay online, one lucky fan and a companion will be flown to Los Angeles to enjoy the action in person and be among the first to play the game on the show floor. Between now and May 10, Nintendo is offering a sweepstakes on Twitter for a chance to win a trip for two to E3 to play the game. Anyone who tweets @NintendoAmerica a note about what The Legend of Zelda series means to them while using the hashtags #MyZeldaLegend and #NintendoSweepstakes will be entered for a chance to win. Fans can share messages about their favorite games, characters or memories of the franchise. Nintendo will select a winner at random. The prize package includes airfare for two, a hotel stay, tickets to E3, a $500 prepaid VISA debit card. For all the details about the sweepstakes, visit http://e3.nintendo.com/#section-sweepstakes.