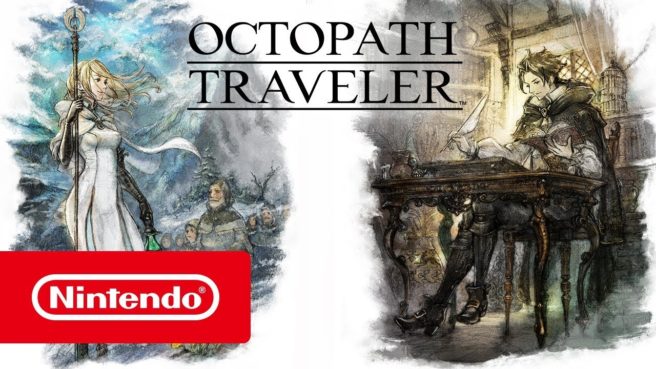 Last week, Square Enix unveiled the final two characters for Octopath Traveler along with a few more gameplay systems. The company has since shared even more information.

One of the latest characters, Cyrus Olbright is 30 years old and is a pursuer of wisdom. He’s a scholar who works at a royal academy in Flatland, a region with vast and lush plains. Despite having well-featured looks who receives passionate stares from academy students, he only focuses on books and mysteries.

One day, Cyrus notices that there’s a book missing from the archives. That’s how his journey truly begins.

As a scholar, Cyrus excels in fire, ice, and thunder magic attacks. He can take battle with powerful attacks that hit all enemies. Other than obviously going for an enemy’s weakness by controlling three elements, he can even examine foes to expose their weakness.

Cyrus’ starting point is the Flatland Region. It’s an area with gently-sloped plains, located at the northeast part of Olstera. The land is governed by the Kingdom of Wold, which has a history longer than other existing nations, and there is a royal academy where many scholars come to study at.

In the past, eight tribes had endless strife in this land. But when Coastland’s Granport invaded the land about 200 years ago, the tribes became united. They borrowed the power of the Sacred Fire Church to repel them.

The Kingdom of Wold was built from this occasion. The current king is Osred II.

We also have a bit more about Ophelia, who is 20 years old. She worked as a priestess at the Sacred Fire Church in Frostland, where snow falls and piles up.

There is a Memorial Fire Offering Ceremony held once in 20 years, and the person in charge of handling it is also her sister and close friend. One day, the two of them are given a trial…

In battle, Ophelia can act as the party’s healer. She can heal the whole party or revive fallen allies. In addition to support that raises ally defense and other stats, she can also sometimes switch to the offensive by using light elemental magic attacks.

Ophelia’s starting point is the Frostland Region. It’s a cold region located at the north of Olstera with plenty of snow. It is said that the Sacred Fire God Elfric descended on this land. The land also has a Sacred Fire Papal Territory, which is under direct control of the Sacred Fire Church which reveres Elfric and the Sacred Fire. The faith of Olsteran people gather here.

Around 200 years ago, when Coastland’s Granport invaded Flatland, the Sacred Fire Church supported Flatland. Due to this, the eight tribes of Flatland presented them the Flamegrace town which is then used as a Sacred Fire Papal Territory. Other than that, a number of small countries are governing in an autonomous way.

We have the latest screenshots from Octopath Traveler below.