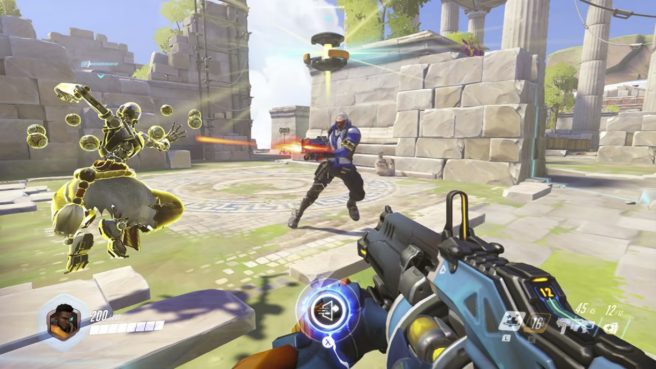 Overwatch 2 started to launch on Switch yesterday, and a bit of gameplay has come in. Eight minutes of footage shows the title running on Nintendo’s console.

Overwatch 2 is an always-on and ever-evolving free-to-play, team-based action game set in an optimistic future, where every match is the ultimate 5v5 battlefield brawl. Team up with friends and dive into the reimagined PvP experience as a time-jumping freedom fighter, a beat-dropping battlefield DJ, or one of over 30 other unique heroes as you battle it out around the globe.

35 HEROES, 22 MAPS AND 6 GAME MODES
Lead the charge, ambush your enemies, or aid your allies as one of 35 distinct heroes. Take them into battle across 22 futuristic maps inspired by real-world locations, and master six unique game modes.

SEASON ONE IS NOW LIVE
New heroes, maps, and game modes will be added in seasonal updates every nine weeks. Drop into Season One and unlock the latest hero, Kiriko, and over 20 tiers of completely free rewards on the Battle Pass. Purchase the Premium Battle Pass to unlock even more cosmetic rewards including the all-new Demon Genji Mythic skin, legendary skins, sprays, voice lines, weapon charms, and more!

Get a look at the gameplay for Overwatch 2 below.