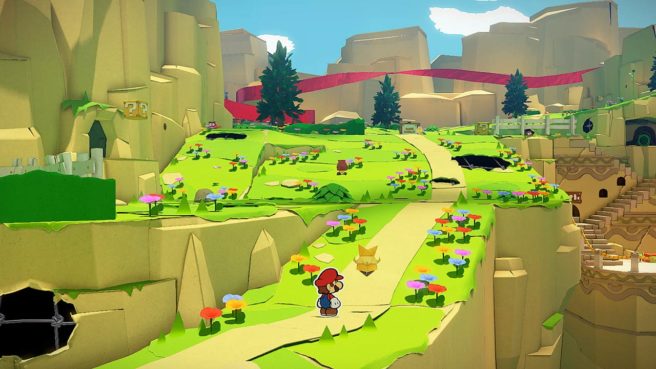 Game Informer has shared the latest information about Paper Mario: The Origami King. There’s a bit more about battles, confirmation that we’re getting an open-world setup instead of it being chapter-focused, and more.

– Intelligent Systems dev Naohiko Aoyama asked for a battle system in which the enemies surround Mario to attack from all sides
– This is how the team first started thinking about battles for The Origami King
– Tanabe had an idea come to him one day while in the shower about a Rubik’s Cube
– This inspired him to add vertical rotations to the horizontal rotations and led to the slide mechanic
– Combat begins with players having a set number of turns in the planning phase to optimize their positioning
– The goal is to line enemies up in groups so that Mario can take them out efficiently
– Stomp attack hits enemies lined up in a row
– Hammer deals more concentrated damage to groups of enemies that are standing side-by-side and one row deep
– Can spend coins to purchase more time to think if you’re running low on time
– Toad friends can give you hints if you pay them
– Even if you blow it on your first attempt, you can still rearrange the stragglers once both you and the enemies have taken turns
– Each of the five streamers encasing Peach’s castle is guarded by a member of the Legion of Stationary
– The team initially wanted to use the same basic battle system in these boss encounters, but since you fight these bosses one at a time, you didn’t have anything to line up
– Because of this, the boss is in the center and Mario creates a route to the boss from the outside
– Bosses are scattered around the world and players can see the streamers far in the distance
– Story isn’t chapter-focused like past games
– Players can travel from region to region seamlessly in an open-world setup
– Huge maps to explore
– Nintendo designed the game so that “there is always something in the player’s field of vision to catch their attention,” according to Intelligent Systems director Masahiko Magaya
– Mario can drive a boot-shaped car around and pilot a boat
– Mario will also be aboard an airship, where he takes command of the ship’s defenses to fire rockets at incoming paper planes
– Lots of one-off activities and miscellaneous diversions in the game
– Mario will encounter a host of Toads who have been folded into different origami forms
– Hitting them with his hammer reverts them back to their normal form, then several things can happen
– They might return to Toad Town, restoring valuable services to the location, like selling items or opening the dock
– The Toads may also join Mario in battle, watching from the sidelines and helping when asked (and paid)
– Can go fishing
– Olivia is a constant companion throughout the adventure
– Other characters join and leave along the way
– The shuffling cast is a function of the story, so players aren’t deciding which allies to bring along

You can check out Game Informer’s full preview here.