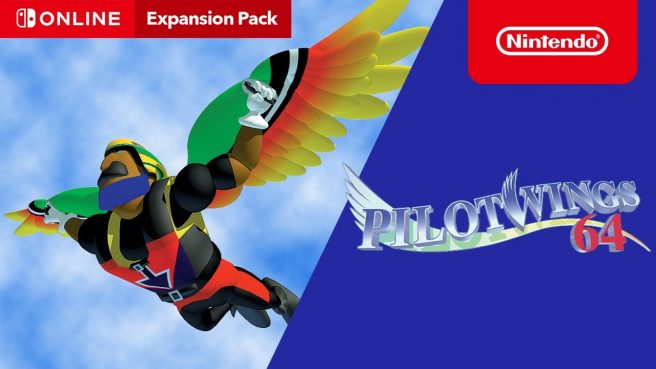 Pilotwings 64 will be added to Nintendo Switch Online as part of the Expansion Pack tier next week, Nintendo has announced. It will be available on October 13, 2022.

Soar into the wild blue yonder with this stunning flight sim/action game from Nintendo! Choose one of six aviators and tackle increasingly difficult assignments to win your wings: Beginner’s Class, Class A, Class B and, finally, Pilot Class. Winning your Pilot Class wings will require you to successfully navigate 24 tests.

To begin with, vehicles include the Hang Glider, Rocket Belt and Gyrocopter. Score well on your way to a license and you can open up four bonus games. Parachute in Sky Diving, sprout wings and fly like a bird in Birdman, and bounce high in Jumble Hopper. You can even try to hit a distant bull’s eye as a human Cannonball! To earn your wings, you’ll have to master takeoffs, landings and staying aloft. While in the air, keep close track of your fuel and altitude as well as wind conditions.

For advanced licenses, you’ll have to follow tricky routes and bring home photographic proof. For example, the Pilot Class license for the Rocket Belt requires you to fly through a twisting cavern and guide a bouncing Rocket Ball down a steep mountainside. On the way to winning your wings, you’ll have to battle updrafts, clouds and blizzards. Action fans can squeeze off a few rounds off rockets against Mecha Hawk, a robot rampaging through Little States Island. The action ranges from torrid jungles of Crescent Island to the ice floes bobbing off Everfrost Island. Little States Island is packed with famous U.S. landmarks, including Mount Rushmore, the Statue of Liberty and the Grand Canyon.

The N64’s processors fill the lush backgrounds with plenty of moving objects, including hot-air balloons, spouting whales, smoke rising from an oil refinery and a soaring space shuttle – and excellent transparency effects make you feel that you’re flying right through clouds.

We also have the following trailer for Pilotwings 64 on Nintendo Switch Online: