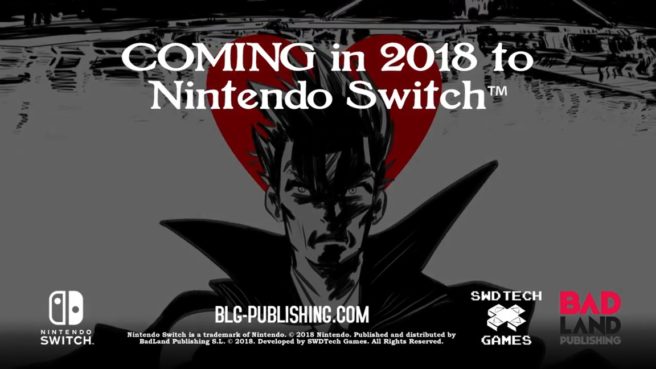 Pixel Noir is coming to Switch, BadLand Games and have announced. The port is expected out at the same time as other versions of the game in 2018.

Pixel Noir is described as “a JRPG-inspired detective game set against a film noir backdrop.” While solving mysteries, you’ll use an investigation feature, partake in turn-based combat, and more.

We have more information and a trailer for Pixel Noir below.

The J-RPG inspired game by SWDTech will have a Nintendo Switch port and will be released at the same launch date as the Xbox One, PC and PlayStation 4 versions.

The version for Nintendo’s hybrid Console will include every element introduced on PC, Xbox One and PS4, but you’ll be able to explore and survive Pinnacle City anywhere!
As with the other versions of the game already announced, the game will have Spanish, French and German translations included on launch date.

• Solve a variety of mysteries as Pinnacle City’s cheapest Private Eye! From missing pets to murder investigations, your detective skills will earn you either fortune or face punches.

• Fight enemies in turn-based combat. Unleash devastating combo attacks by teaming up with other heroes in your team!

• Use your investigation mode to reveal clues. Level it up over time to unearth new secrets and storylines!

• Overkill mechanic: if you do too much damage, instead of knocking your enemy out, you can kill them. This will affect what type of spoils you get from battle! New timed hit mechanics for skills including button sequences and d-pad rotation!

• CRDTech card game… can you find Phil, the Dust Master?