Pokemon GO – message from the creators, no change in Nintendo forecast 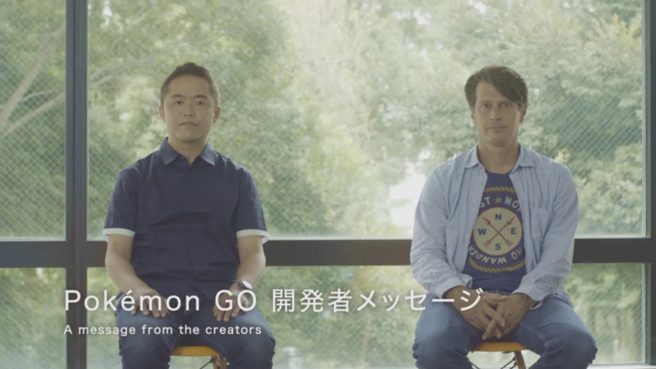 Pokemon GO is now available in Japan. To celebrate, Niantic’s John Hanke and Game Freak’s Junichi Masuda shared a few words. Most of the message is from Hanke, though Masuda’s comments are unfortunately available in Japanese only.

In any case, here’s the video:

Aside from the video, Nintendo issued a notice on its investor’s website about its forecast in response to Pokemon GO. Essentially, things are staying the same from now. You can read the full message below.

Niantic, Inc., a U.S.-based company, has begun to distribute the “Pokémon GO” application for smart devices in Japan today.

This mobile game application is developed and distributed by Niantic, Inc. The Pokémon Company, which is an affiliated company of Nintendo Co., Ltd. (the “Company”), holds the ownership rights to Pokémon. The Pokémon Company is going to receive a licensing fee as well as compensation for collaboration in the development and operations of the application.

Also, a peripheral device for use with the application, “Pokémon GO Plus,” which will be produced and distributed by the Company, is scheduled for release. All of the above are reflected in the financial forecast ending March 31, 2017 as set forth on April 27, 2016.