Pokemon GO tops Pandora, Twitter, Netflix, Hangouts and Spotify in the U.S. for daily active use 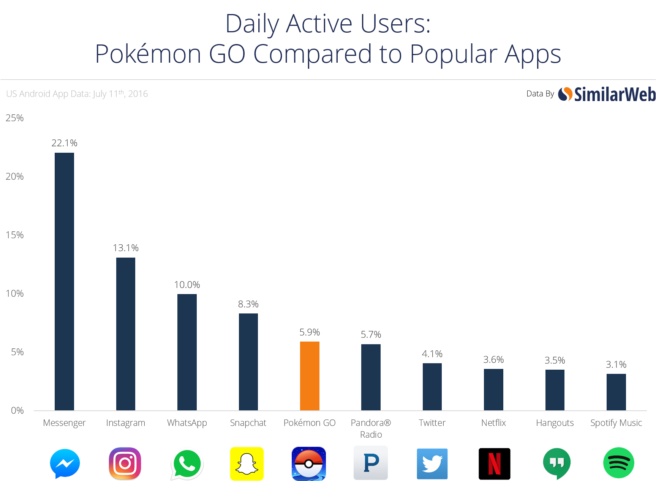 Pokemon GO has managed to leap over another set of popular apps. According to SimilarWeb, it’s now surpassed Pandora, Twitter, Netflix, Hangouts and Spotify for daily use in the United States. The report goes on to speculate that Snapchat, WhatsApp, and other popular social apps will be next based on Pokemon GO’s performance.

On July 11, 5.9 percent of all Android owners in the U.S. used Pokemon GO. That’s 46 percent more than the 4.1 percent who used the Twitter app on the same day.

Going back to game-specific talk, Pokemon GO is above Candy Crush Saga (8.7 percent) and Clash of Clans (5.2 percent) on installs at the moment. It also has a larger reach than Viber, LinkedIn, ESPN, iFunny, Lyft, musical.ly, and Tinder.