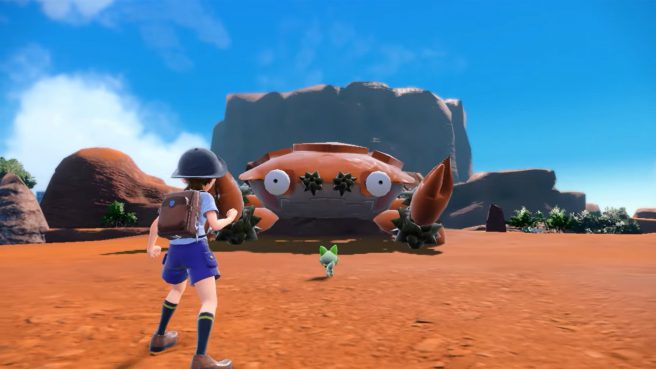 Your Own Story, Woven Through Your Treasure Hunt
In Pokémon Scarlet and Pokémon Violet, players are enrolled in a school that will host an independent study project themed, “A Treasure Hunt.” Three stories will be woven into the player’s adventures while traversing the sprawling Paldea region:

These stories are set in an open world teeming with Pokémon and people to meet, so players can determine which path to take and explore however they desire.

Let’s Go! A Handy Feature for Exploring the Paldea Region
Players can have one Pokémon out and walking with them in the Paldea region’s great outdoors. When they have a Pokémon exploring with them in the field, players can use the “Let’s Go!” feature to send that Pokémon off in the direction they indicate. The Pokémon the player sends out then independently picks up items in the area and even has Auto Battles with nearby Pokémon.

As for the new Pokemon, Armarouge, Ceruledge, and Klawf have been unveiled. Learn more about them here.

Watch the new “Seek Your Treasure!” trailer for Pokemon Scarlet and Pokemon Violet below.

Pokemon Scarlet and Pokemon Violet release for Switch on November 18, 2022.