Pokemon Sword/Shield – new details and footage for The Crown Tundra 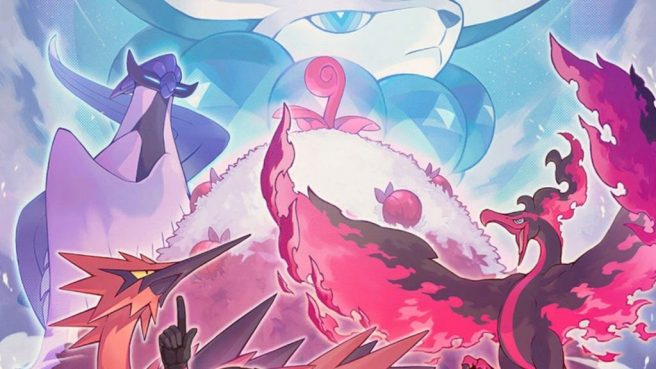 A few outlets have started to come forward with previews of The Crown Tundra for Pokemon Sword and Pokemon Shield. Thanks to that, we have another batch of details and footage.

– More story-centric than the Isle of Armor
– Take on a few different quests
– Start out on an adventure with Peony, a former Galar gym leader, as you learn about Dynamax Adventures and work to uncover the mysteries of the new Legendary Pokemon Calyrex and its influence on the area
– Also have the mission of learning more about and battling the Galarian versions of the Legendary bird trio from the first-gen games: Articuno, Zapdos, and Moltres
– Can access the Crown Tundra as soon as they reach Wedgehurst in Sword & Shield’s main story
– Once you travel to the Crown Tundra, your Pokedex updates with the additional creatures found in the area and you meet Peony
– Peony is gearing up for an expedition into Pokemon dens to find the Legendary Pokemon hidden in the Galar region
– Travel to the town of Freezington, located in the west of the Crown Tundra
– There, you encounter Calyrex
– The footage cuts out, but Peony comes running out, saying he heard a battle
– Calyrex wastes little time, possessing Peony and speaking through him and setting the player up for the quest surrounding the new Legendary monster
– Second adventure focuses on the Galarian forms of the Legendary birds
– The quest is called A Legendary Tree of a Legendary Three
– Itbegins with a cutscene around a giant, pink tree
– Moltres and Zapdos break out into a fight, before Articuno crashes the party
– Before long, they realize you’re watching, and they disperse to different parts of the Crown Tundra
– You encounter the Legendary trio similar to how you encountered the Legendary dogs in the Johto region
– Need to go on your bike to try and encounter the Legendary birds
– The Crown Tundra is structured like one giant Wild Are
– Snowy mountainsides, vast fields, and winding caverns
– Can camp all across the area
– Galarian Slowking has an ability called Curious Medicine, which removes stat changes from all allies when it enters the battlefield
– In Dynamax Adventures, you team up with three other trainers as you work through branching paths of Max Raid Battles using a Pokemon you borrow from the expedition team
– After you win a Max Raid Battle, you choose whether you want to swap your borrowed Pokemon out for the one you just caught, or carry on
– HP and status effects carry over into subsequent battles
– Some paths give you encounters with other characters, like a Scientist, who can swap out your tired Pokemon for a fresh one
– If four Pokemon are knocked out over the course of the Dynamax Adventure, the trainers are kicked out and must start over again
– If you’re successful in your expedition, you can choose one Pokemon from the adventure to keep
– You also acquire several items, such as the Ability Patch
– This is a new item that changes a Pokemon’s existing ability to a rare ability
– Once you complete the story of the Pokemon Sword & Shield, The Isle of Armor, and The Crown Tundra, a new post-game challenge unlocks in the main game
– Leon issues a challenge to all gym leaders in the Galar region to combine their powers to become even more formidable foes for would-be champions, and the Galarian Star Tournament is born
– This is the hardest challenge in Sword & Shield to date
– Players team up with other trainers they’ve encountered over the course of their journey to take on gym leader duos, as well as other skilled trainers they’ve encountered on their journey including Hop and Mustard