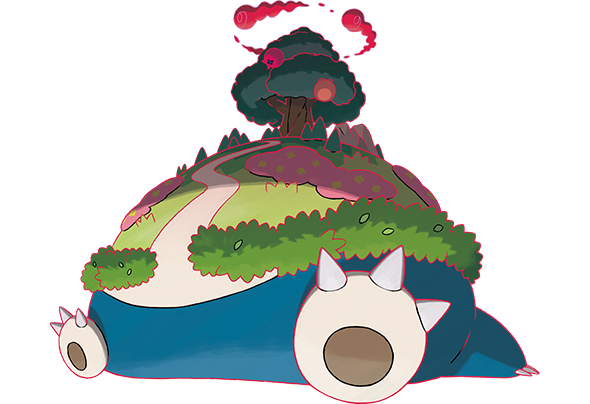 Following up today’s new trailer, The Pokemon Company has passed along another news update on Pokemon Sword/Shield. The latest coverage pertains to Gigantamax Snorlax, starter evolutions, and Zacian and Zamazenta.

Today, The Pokémon Company International and Nintendo shared more information regarding the recently discovered Gigantamax Snorlax, Evolutions of Grookey, Scorbunny, and Sobble, and the Legendary Pokémon Zacian and Zamazenta, for the Pokémon Sword and Pokémon Shield video games, available now exclusively on the Nintendo Switch system.

The Pokémon Company International also unveiled Sword & Shield, the first new expansion for the Pokémon Trading Card Game: Sword & Shield Series that is based on the latest video games. Sword & Shield will offer a new type of card and game mechanic called Pokémon VMAX—beautifully illustrated and powerful cards that showcase Dynamax or Gigantamax Pokémon such as Gigantamax Snorlax. Trainers will be able to collect, trade, and play with Pokémon VMAX when the set launches around the world on February 7, 2020.

Thanks to the power of Gigantamax, the Berry seeds and small rocks that were tangled in Snorlax’s belly fur have undergone explosive growth. With a tree sprouting upon its belly, Gigantamax Snorlax has the majesty of a great mountain. Even though it almost never moves, Gigantamax Snorlax is said to be one of the strongest Dynamax Pokémon discovered. When the time comes for it to battle, it lifts its upper body by just a tiny amount and attacks by flailing with its arms and legs—actions that actually pack a tremendous punch. When Snorlax is Gigantamaxed, its Normal-type attacks will be transformed into G-Max Replenish. G-Max Replenish doesn’t just deal damage to targets—it can also restore any Berries that Gigantamax Snorlax’s allies have eaten during the battle.

Gigantamax Snorlax will appear more frequently in Max Raid Battles from Wednesday, December 4, until early January1. Trainers can check out the Pokémon Dens that dot the Wild Area to battle this gigantic form of Snorlax. A connection to the internet will be required to participate in Max Raid Battles. Connecting their Nintendo Switch system to the internet will automatically enable Trainers to encounter the latest Pokémon appearing in the Wild Area. Players can also achieve the same results manually by opening the X menu in their game, selecting Mystery Gift, and then selecting Get the Wild Area News.

The Evolution of First Partner Pokémon

Grookey’s Evolution has caused its stick to change as well. The stick has split into two, and it uses them to keep rhythm. To be able to drum faster and longer than anyone else, it devotes itself entirely to its practice with these sticks. Sometimes Thwackey becomes so focused on its practice that it doesn’t even hear the orders of its Trainer. To develop its sense of rhythm, Thwackey keeps the beat alive during its daily life. It walks while swaying back and forth to a beat and drumming with its sticks. Some Thwackey have even been seen to keep rhythm while eating.

As Thwackey evolves, its two sticks develop into two sticks and a stump drum. In battle, Rillaboom unleashes powerful sound waves with its drumming and throws opponents about by controlling the roots of its stump. The skills it honed while it was a Thwackey are put on full display. Rillaboom has a gentle nature and won’t involve itself in trivial fights. However, it is extremely sensitive to any actions that could risk the harmony around it and keeps such actions strictly in check. Rillaboom also has a strong sense of solidarity with others, and it will fight ferociously when its allies are in trouble.

The fur that covers Raboot’s body has changed to become more effective against cold weather. This thick fur is also good for controlling the Pokémon’s fire energy, which allows it to unleash its full power in a shorter amount of time. The temperature on its brow and the soles of its feet has increased since evolving, and Raboot uses these areas to deal flaming-hot headbutts and kicks. Favoring the powerful legs it gained through Evolution, Raboot keeps both hands tucked into the thick fur around its waist when it acts. To better train its kicking attacks, Raboot tries not to use its hands at all, which also seems to be effective in keeping it from losing body heat. It’s also not unusual for Raboot to jump high and kick down Berries that grow in tall trees, juggling them on its feet as it eats them.

Cinderace has excellent physical abilities and boasts some of the best skills among all Pokémon when it comes to explosive force, jumping ability, and kicking power. It’s got a strong core and great balance, meaning that it can unleash powerful kicks from any position. Cinderace attacks using a soccer ball made of fire, which it creates by pouring its fire energy into a small stone. It plays with opponents by using its artful footwork—kicking its ball about as it feints this way or that to throw opponents off in their timing or putting a spin on the ball for an attack that’s hard to evade.

Drizzile uses its long and dexterous tongue, which is coated in mucus, both for battle and for eating. This tongue is usually kept within its mouth, but when necessary, it can be launched in a quick shot to strike at Drizzile’s prey. It’s only during these moments that this usually lethargic Pokémon demonstrates a shocking degree of focus. Drizzile is a very cautious Pokémon. It sets up numerous traps in the area where it lives, using the Water-type moves it excels in. It also engages in hit-and-run tactics utilizing the landscape around it and devises strategies that take full advantage of its ability to turn invisible when wet.

Inteleon’s rail-thin body hides a variety of surprising tricks within it. Its fingertips can fire out water that has been compressed within its body—shooting it out at a speed of Mach 3—to hit opponents where they’re weakest. Inteleon also has special lenses in its eyes and a sharp knife hidden in its tail. These hidden tricks allow it to adapt to any situation. Inteleon possesses great intellect and thinks deeply about things, calmly and deliberately. It is also known for its chivalrous behavior. In battle, it analyzes the weaknesses and habits of its opponents to devise strategies against them. Inteleon also appears to show absolute loyalty to Trainers it has recognized as worthy.

New Details about the Legendary Pokémon Zacian and Zamazenta

Zacian attacks its foes using the sword it grips in its mouth. The sword’s edge is extremely sharp and can tear through the thick scales of Dragon-type Pokémon as if they were paper. Zacian dashes through the battlefield to strike its enemies with the speed of a swift wind. Its graceful movements are beautiful to behold and have been compared to a dance. Zacian’s slashing attacks possess a speed that makes them impossible to see with the naked eye, and those hit by its blade are cut down before they can even feel pain from the blow. With this Steel-type physical move, Behemoth Blade, the sword in Zacian’s mouth grows to gigantic proportions and is used to slice at a target. It is especially strong against Dynamax Pokémon, and the impact of it slams through a Dynamax Pokémon’s body to deal devastating damage. The destructive power of this move is said to be enough to cut the ocean in two.

Zamazenta fends off the attacks of foes by using the golden shield that covers its front. The shield’s strength is so formidable that even the sharp claws of Dragon-type Pokémon cannot leave a single scratch upon it. No battlefield, no matter how terrible, can make Zamazenta flinch in its resolve. It will charge the enemy lines head on to defeat its opponents. Its shield-like armor provides impregnable defense but is also a weapon to be used in powerful attacks. When Zamazenta bashes into opponents with all its might, it’s said that the destructive force is enough to put cracks in the land and that the resulting shock wave can lay waste to hundreds of enemies. With this Steel-type physical move, Behemoth Bash, the winged armor on Zamazenta’s front grows to gigantic proportions and is used to bash into a target with devastating force. It is especially strong against Dynamax Pokémon, and the impact of it slams right through a Dynamax Pokémon’s body to deal devastating damage. The destructive power of this move is said to be enough to bore straight through towering mountains.