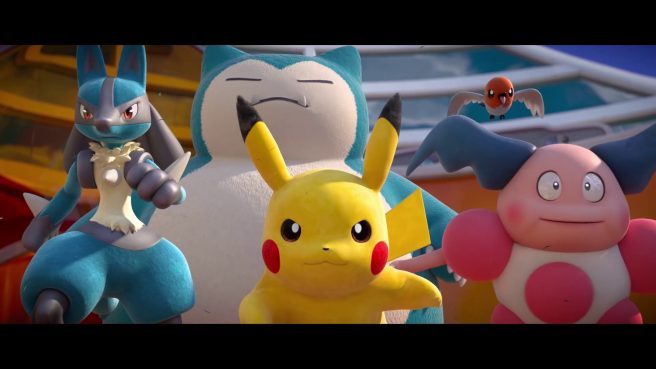 Pokemon Unite producer Masaaki Hoshino has spoken more about the game’s origins, including why the team wanted to make a strategic team battle game. This comes as part of an interview previously conducted by Japanese magazine Famitsu.

Our translation is below:

To start off, can you explain why the team decided to make an online team battle arena game with Pokemon?

Hoshino: The Pokemon series has brought many kinds of games into the world, everything from dungeon crawler RPGs to puzzle games to action games and more. The challenge this time around was to create an online-centric game, something we’d never done up until now, and so we developed Pokemon Unite. The word ‘Unite’ was chosen to bring together people from all around the world.

What parts of Pokemon lend themselves well to a team strategy battle game?

Hoshino: I think characters leveling up and evolving during matches gels with Pokemon well. In many team battle games, many characters are assigned roles and have a particular position they excel in, and utilizing each character’s unique traits is a staple part of the genre. I think it’s easy to imagine how that could work well with Pokemon. As an example, Snorlax could have high health and protect teammates, Talonflame could use its high mobility; just looking at the Pokemon clues players in to how they might play, making them easy to pick up and use, especially for new players.

Other than talking the team battle origins for Pokemon Unite, Famitsu also brought up the relatively low amount of moves for each Pokemon and how it “gives the impression that controlling the character is more the focus.” In response, Hoshino said:

“We decided on that number after considering the number of buttons on a controller. We had plans for an additional move for each Pokemon, but one more button to remember might have been too much information for the player to take on. Considering that more Pokemon will be added down the line, I think we’ve hit a good balance with where it’s at now. You have four moves: The R button, ZR button, a unite move, and a regular attack, which is the same amount of moves as in the original games.”

Pokemon Unite is now available for Switch and mobile as a free-to-play title. You can read comments from Hoshino talking about how the game’s roster was decided here.