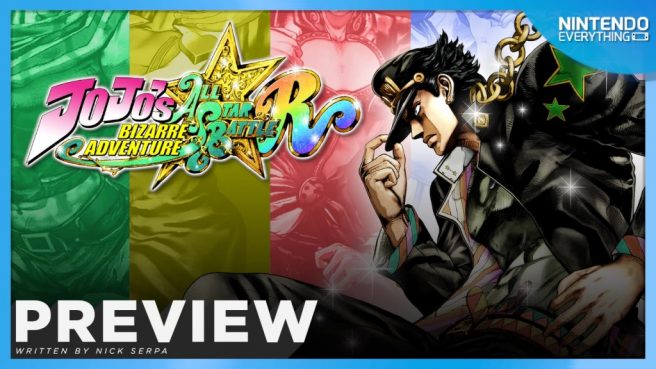 For a multimedia franchise that’s been around for 35 years, it’s been a while since JoJo’s Bizarre Adventure received a AAA game on home consoles, with 2016’s JoJo’s Bizarre Adventure: Eyes of Heaven being the most recent non-phone release. That’s why fans of the franchise have been excited for JoJo’s Bizarre Adventure All-Star Battle R – a remaster of the 2014 fighting game that preceded Eyes of Heaven – which is coming to Switch and other platforms on September 2. I recently had an opportunity to play a small portion of the game and speak with the folks from Bandai Namco to learn more about what’s new in this enhanced version of the fanservice-filled fighter.

Now, look, I’m not going to pretend like I’m some superfan of the JoJo franchise, and when it comes to fighting games, I’m generally a filthy casual outside of anything that’s not Dead or Alive or SoulCalibur. What I can appreciate, however, is the massive amount of work that it takes to bring a game from the PS3 era to today’s systems and make it feel like a modern game. And from what I played of All-Star Battle R at Summer Game Fest, there seems to be a lot of behind-the-scenes adjustments that were made to smooth out some of the edges of the original.

“Calling it a remaster is kind of an understatement,” said Ryan Wagner of Bandai Namco. “If it was a car, we’ve taken out the engine, and then we gave it brand new parts and a brand-new chassis and a brand-new paint job.” At a mechanical level, Wagner said that hitboxes and hurtboxes have been totally adjusted, meaning that attacks will now land more precisely than in the original release. Physics have been tweaked in the game’s engine, making animations look and feel more fluid compared to the original release, and making everything feel faster to control.

For those who are unfamiliar, fights in All-Star Battle R take place on a 2.5D plane, which means that while combat normally controls from a side-scrolling perspective, it’s also possible to occasionally leverage the foreground or background of the environment. This is done by utilizing a quickstep dodge-esque ability to orbit around your enemy. There are also environmental hazards to play around with, like dropping a massive chandelier onto your enemy in the most over-the-top way possible. It all has a moderately heavy feeling of weight and impact to it – I would say heavier than Dead or Alive, but maybe a bit more maneuverable than Street Fighter.

I found it all relatively easy to pick up and play, and for those who are new to fighting games or just want to appreciate the ridiculous style that is the essence of JoJo’s Bizzare Adventure All-Star Battle R, this rerelease adds an Easy Beat Mode designed to make the game more approachable. This essentially removes some of the complexity involved in chaining together advanced combos by making it significantly easier to pull off some of the more exciting moves in the game, including supers. JoJo has always been known for its flair, so including this type of playstyle accommodation is a way to make sure that fans of the franchise who may not be great at fighting games can still experience all the game has to offer, Wagner said. That aforementioned paint job has gotten quite a bit of detail-work performed, too. When All-Star Battle originally released, the in-game character models were heavily inspired by the art style of the JoJo manga, as the anime had only been out for a couple of seasons, Wagner said. For All-Star Battle R, character models and voice acting were both “entirely redone” to align with the anime more closely.

That’s impressive, considering that the game will launch with over 50 playable characters, with even more coming down the road as paid DLC. It’s worth mentioning that somewhere around 75% of those characters also have what’s called a Stand Ability, which is basically an entirely separate moveset unique to each character that can be triggered by hitting the right bumper. It even changes how Easy Beat combos will work, meaning that there’s a large skill ceiling in this game for players who want to get the most out of their time with it. That’s without even getting into other combat options, like calling assist characters into battle.

While Wagner says All-Star Battle R won’t contain any meaningful advancements to the overall lore of JoJo’s Bizarre Adventure, the game does feature a new mode – appropriately named All-Star Battle mode – which is all about letting franchise fans experience “dream matchups,” pitting characters that might normally never interact with each other against one another in matches with specific criteria, like opponents with extra health and strength. That’s one way in which players can unlock new cosmetic items to use in other modes, too. There are additional new modes coming to All-Star Battle R too, Wagner said, although I didn’t get to see these during my brief session with the game.

If the Switch version performs well at a technical level, should be a fitting way to celebrate the 35th anniversary of this off-the-wall series, and fans and newcomers alike will seemingly have a lot to sink their teeth into when the game releases on Switch on September 2, 2022.