Posted on July 12, 2019 by Jakob Vujovic(@jakovujo) in Reviews, Switch 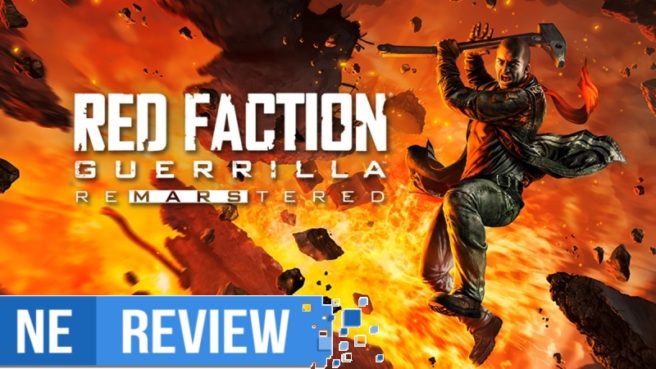 Red Faction Guerrilla Re-Mars-tered is the latest re-release of a last generation game from THQ Nordic, if the stunningly awful pun didn’t reveal that much. Saints Row The Third held up as a fine example of last generation open world design, even as its particular irreverent sensibilities often felt like a relic – the game showed its age but it was nonetheless fun to play.

Red Faction Guerrilla is a relic in different ways. The story mode, obligatory as it was to have at a time, is very self serious and almost comically undercooked; the game opens with Dan, the bald brother of our shaved-headed protagonist Alec, tragically gunned down by a chopper minutes after his arrival on Mars. In the preceding minutes we do get a token humanizing moment where Alec mentions to his brother how “mom misses you.” His brother’s on-screen death goes down with a conspicuous lack of blood, and soon enough Alec finds himself working for the titular Red Faction to avenge his brother. It’s a hasty setup for a revenge plot, but what really matters is that Alec won’t be using his mining explosives on rocks, but on Earth Defense Force buildings. 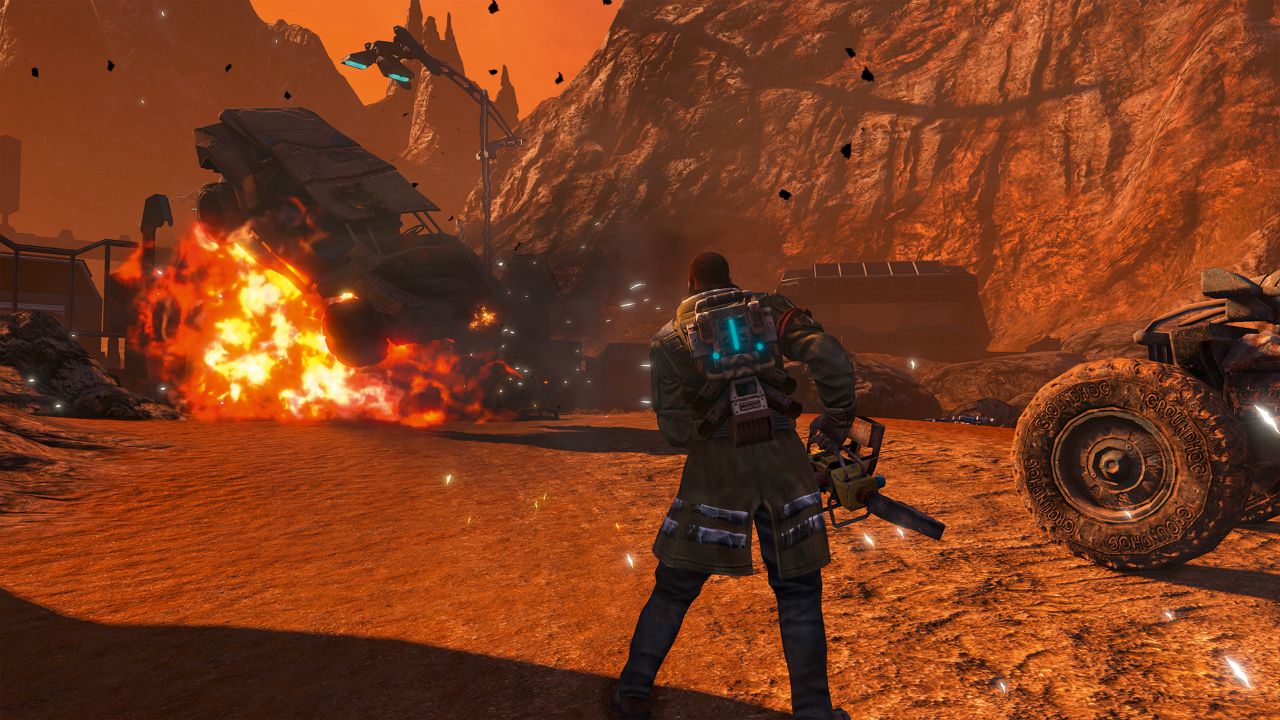 The game is undeniably AA, from a time where that meant developers had to cram in all of the features of a much higher budget affair within a much smaller scope. The results are obvious in certain respects: the cliche fodder of a story for one, along with the obligatory empty open world. There’s not much to see, much less do, in it besides looking at indistinct z-brushed terrain masked by a reddish-brown Martian haze. These are all ancillary because attention was instead paid to the game’s robust physics and destruction simulation. Destroying buildings is the whole appeal here, and if for nothing else, the fact that no other game has shipped with any system quite as extensive as this since 2009 warrants this game’s remaster. Buildings, weighed down by a frame and filled in with wall, roof, and floor panels, all react and collapse relatively realistically. The base of a tower, for example, will become visibly torn up if you start throwing grenades at it and you might even see it collapse under its own weight before you tear up its entire foundation.

The story mode starts with basic tools: throwable remote detonating explosives and a giant sledgehammer – the hammer can swing either vertically or horizontally, a nuance that emphasizes the impressive destructibility of structures in the game world. The story mode isn’t all unremarkable; there’s just a lot of unremarkable space between missions. These missions vary from extraordinary, where the game gives a limited selection of tools, some structures, and a time limit to push the demolition engine to its extremes, to the less interesting “shoot all the enemy soldiers” variety. The latter mission type at least tends to be short and you can use any of the tools at your disposal, not just guns which feel spongy and weightless. 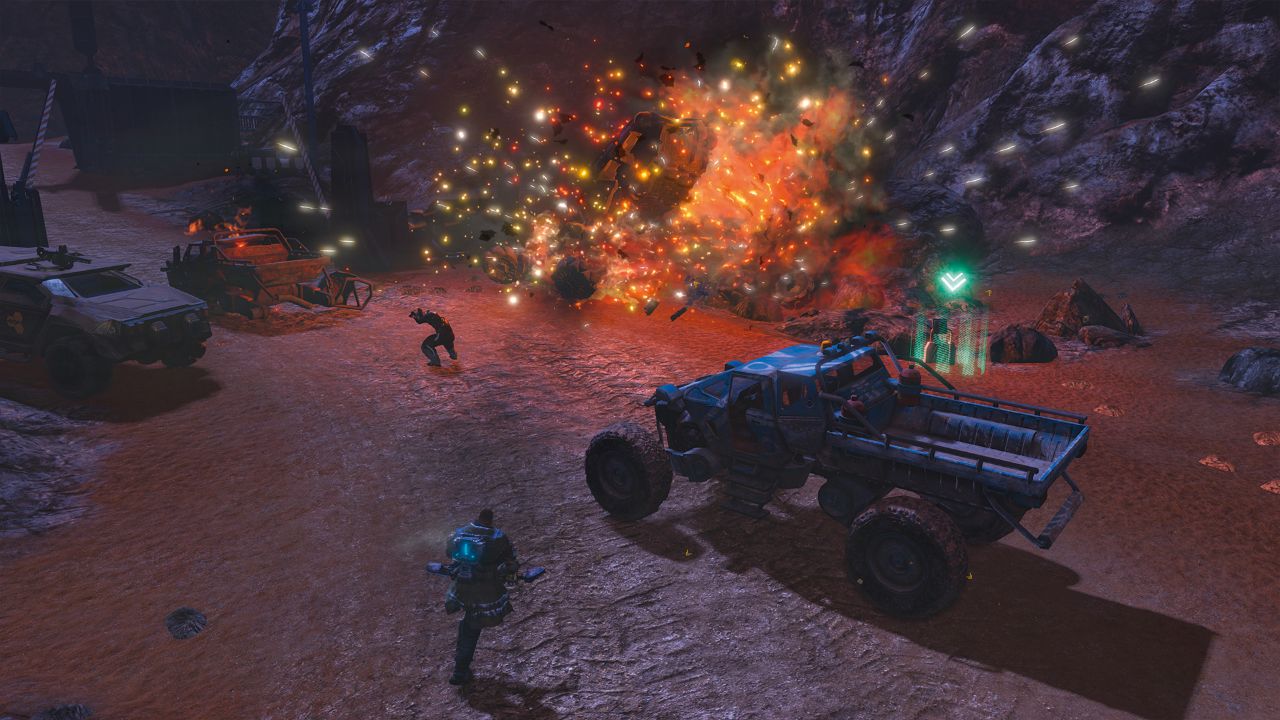 Outside of the open world there’s also the more focused Wrecking Mode, which can be played solo or multiplayer, where players are tasked with destroying as much of the map as possible with the tools at hand. This is a great side mode since it’s really just the great parts of the story mode with all the fodder cut out. Like THQ’s Saints Row: The Third, this release also comes with all of the original game’s DLC. Unfortunately another similarity is that the game’s performance is far from perfect on Switch. There are options here, with a graphics mode and performance mode. I stuck with the default performance mode which makes the lighting slightly flatter and the resolution a little lower, but with this mode the game’s frame rate is stable in handheld mode, with drops on in the most hectic moments of destruction. In handheld mode where I mostly played, the game is very playable.

There’s a lot that’s totally unremarkable about Red Faction Guerrilla Re-Mars-tered. Its story and open world reveal its budget-constricted 2009 origins, but the game’s real ambitions lay in its realistic physics-based demolition engine. There haven’t been any games since which have implemented this kind of a robust demolition system. Even as the game can feel like an unremarkable relic, that stuff is easy enough to ignore. The demolition engine, the game’s real draw, still feels ahead of its time and justifies this remaster.

Red Faction Guerrilla Re-Mars-tered review copy provided by THQ Nordic for the purposes of this review.