Reggie talks about his last days at Nintendo 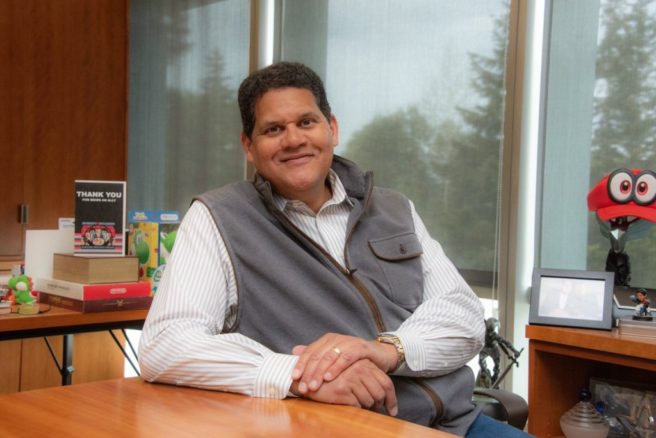 As part of the Talking Games with Reggie & Harold podcast available to those that donated to the New York Videogame Critics Circle nonprofit’s mentoring work, former Nintendo of America president Reggie Fils-Aime spoke about what his last days were like with the company.

Before that final day, Reggie and his wife went into the office to clean up and pack a few items. Knowing how it would be “an emotional time,” he wanted it to be just the two of them. Reggie took some photos with items in his office, and those were some of the first pictures shared on his new Twitter account – which had an estimated 300,000 followers within the first day or two of his account opening.

Reggie had this to say about his actual last day at Nintendo:

“The day itself, we had an event with all of the employees for all of the Washington state-based employees, and we had a presentation, a series of comments, some gifts that were presented to me, and we also had video from employees in some of our remote locations that couldn’t be with us that day. It was highly emotional. At the end, I was able to make some concluding comments.

At the end of the formal presentation – the formal remarks – as I came off stage, a number of employees came up to me, wanting to spend some time. And then I looked up, and there proceeded to be a line of probably what was a few hundred employees, and I went through that line person by person. My wife Stacey says that it took about 90 minutes, almost two hours to go through that line. Just spending a few minutes with employees, many that I knew, some who had just joined the company, and were expressing their passion for the company, their disappointment that they would go on with their career at Nintendo as I was ending mine.”

Reggie said he was “exhausted” the next day, but attended an event at his favorite restaurant with around 50 friends and employees. These events tend to have business talk, but there was none of that at the party, and Reggie called it a “fun, uplifting ending.”