Posted on January 17, 2022 by Nicholas Serpa in Reviews, Switch eShop 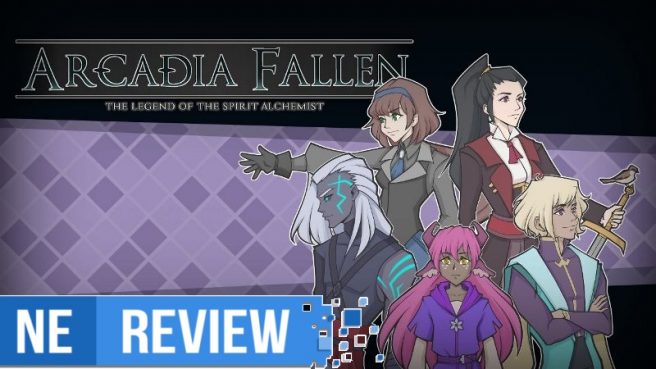 It’s hard not to respect a game that tries to punch above its weight and bring fresh ideas into a crowded genre; that alone was enough to get Arcadia Fallen on my radar. Developed by a small team and originally funded on Kickstarter, the game appears at first glance to be just another visual novel about magical beings trying to save the world, but Galdra Studios created something special by adding layers of decision-making and puzzle mechanics to what otherwise would have been a by-the-books experience. And while the individual elements of Arcadia Fallen’s presentation and systems lack the polish and nuance to match its ambitions, its heartfelt narrative and lovable cast of characters elevate the experience to something greater than the sum of its parts.

Arcadia Fallen casts the player as Morgan, an alchemist-in-training who helps operate a potion shop underneath the watchful eye of his mentor Elizabeth. Shortly after picking up ingredients from a local floral shop, Morgan hears a scream, and finds one of the town’s residents seemingly possessed by some sort of dark force, and brandishing a knife at a pink-haired spirit girl named Mime. Morgan manages to save her life but is stabbed in the process, and while Mime does save the protagonist from the brink of death, she accidentally binds their two souls in the process and grants Morgan use of her magic. As the duo attempt to figure out how to unbind themselves from each other, they quickly realize that demons have been leaking into the world and possessing the town’s villagers, seemingly connected to some strange happenings at the mine near the outskirts of the village. 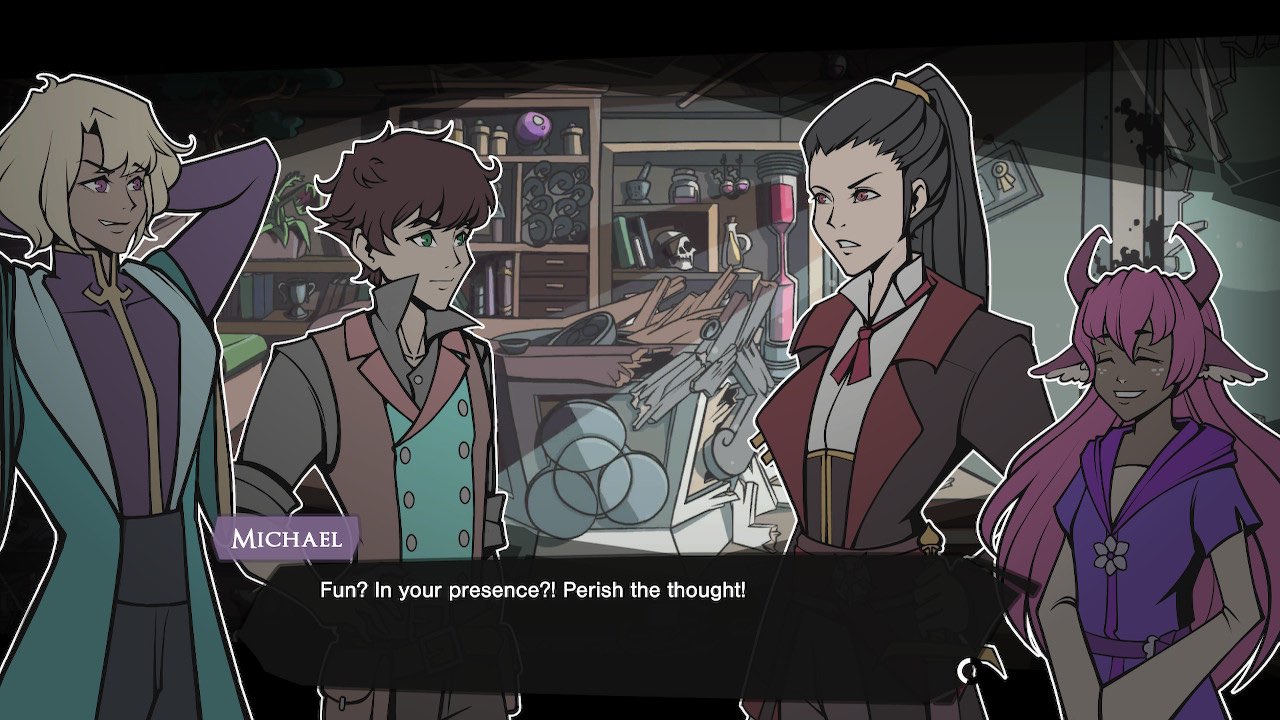 It’s a fairly by-the books story, so I wouldn’t recommend setting your expectations for some jaw-dropping mystery or anything like that – and from a pacing perspective, it did take a chapter or two for for me to really star caring about what was going on. Fortunately, it’s not long before Morgan and Mime cross paths and combine forces with a small but eclectic cast of characters. My favorites were Victoria, a stern-faced but insecure demon-hunter sent by the capitol to eliminate “illegal” magical beings from the region, and Ann, a scientist and tinkerer with a snarky personality and a deep inner desire to forge her own path. Both of them are not only party members but also potential love interests for Morgan, alongside the mysterious outlander Kaiden and the flamboyant mage Michael.

Arcadia Fallen really wants the player to feel like they are Morgan, and the game begins by letting you design a character from a small suite of options. I wish it was a bit more robust – you can really only change a few hairstyle and colors, and choose Morgan’s gender, pronouns and voice – so I couldn’t really design my character to look like me to the extent that I had hoped. Still, I love the fact that this option exists at all, and it definitely contributed to my investment in Morgan’s journey.

Beyond that, Arcadia Fallen empowers the player to shape Morgan into whatever type of of hero they see fit by regularly presenting choices that dictate how Morgan responds to conversations and situations. Most of these are small decisions that only really affect how a conversation plays out in the moment – for example, do you respond in a joking, timid, or determined manner – but occasionally the game will present you with a choice to make alongside a Telltale-inspired disclaimer such as “Your response will affect this character’s opinion of you moving forward.” I really love this level of player-driven influence in stories like this, and have few gripes with this mechanic, although I was a little underwhelmed that the scope of the choices you make very rarely feels game-altering. Arcadia Fallen’s Steam page proudly proclaims that there are “no right or wrong choices” in the game, and that feels honest – the story will progress along a relatively linear path no matter what you choose, although it’s possible to experience some scenes in different orders (or not at all) depending on how you explore the town’s map. I only ever really felt the weight of my choices in my moment-to-moment interactions with characters and near the end of the game, and even then, it really only seemed like a handful of decisions I had made in the earlier chapters of Arcadia Fallen contributed to the ending I saw. 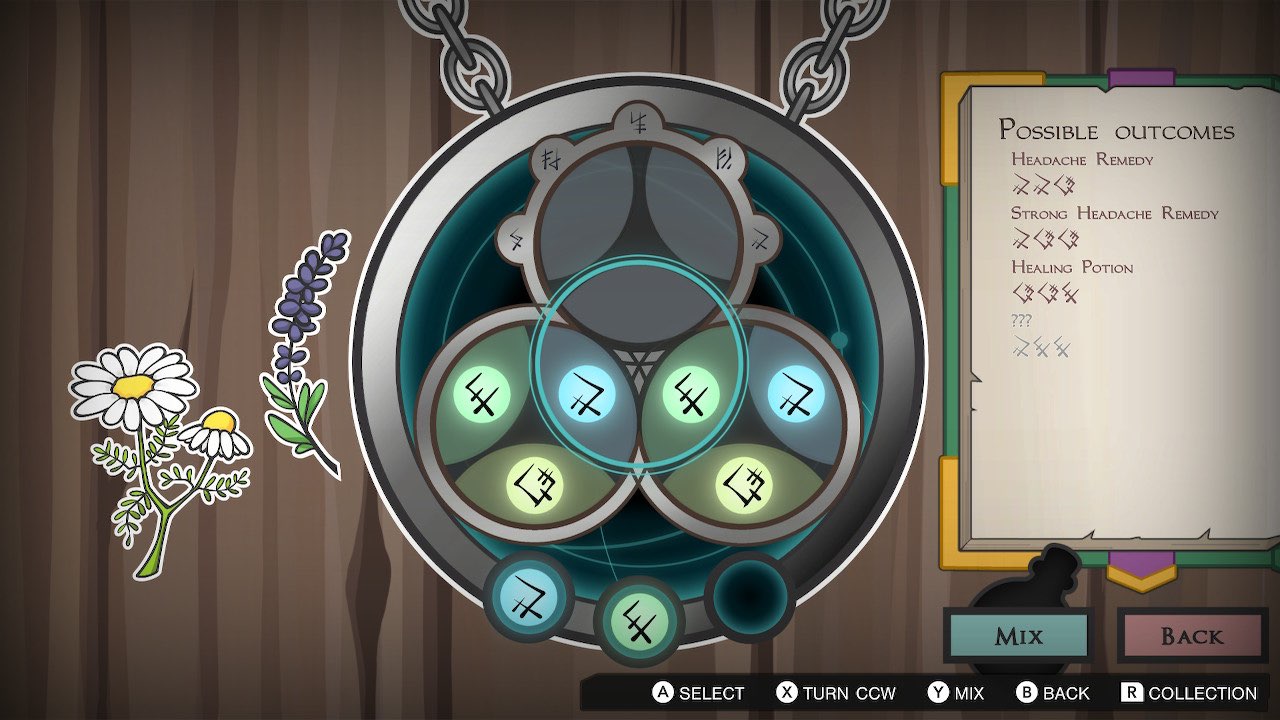 The game handles its romance elements in a similar manner. While you can choose to try and woo any one of the game’s four adult party members, there’s little challenge in doing so. Arcadia Fallen makes it very clear which dialogue options will lead towards a romance with a given character, and it didn’t really feel like it was possible to make a mistake that would lock Morgan out of a relationship. I actually think Arcadia Fallen would have been stronger if it had put some more weight behind the words you make Morgan say, because as it stands, it just all feels a bit inconsequential, even if its’s still an enjoyable ride.

It’s also worth mentioning that the narrative in Arcadia Fallen is smaller in scope than its marketing materials might have you believe. The game mostly takes place in a single town across a handful of environments, and while I don’t inherently have a problem with that, I was disappointed at how bland the setting felt as a whole. Background CGs are mostly devoid of detail and life, which really surprised me considering how much love seemingly went into the wide variety of character portraits. The interior environments fare okay, but most of the exterior environments were disappointingly stark. I know art and style are highly subjective, but very little about the world of this game felt compelling to experience and exist in on its own.

Luckily, the writing in Arcadia Fallen is top-notch, and it mostly makes up for some of the blander elements of the game’s presentation. A good chunk of it is voice acted, too, although not all of it, presumably for budgetary reasons. Each character in the game’s main cast feels real, and they all wear their flaws and personalities on their sleeves. Even in the game’s darker moments, Arcadia Fallen maintains a lightheartedness and casual sense of humor that the voice acting amplifies by quite a large degree. It can occasionally sound a bit over-the-top when characters decide to enter a monologue of self-reflection, but is otherwise charming and and adds some flair to the story. Also, characters unironically say the phrase “Perish the thought!” at least twice over the course of the game, which is just wonderful. The pacing of the voice acting can occasionally have some awkwardly-long pauses, but is otherwise great. 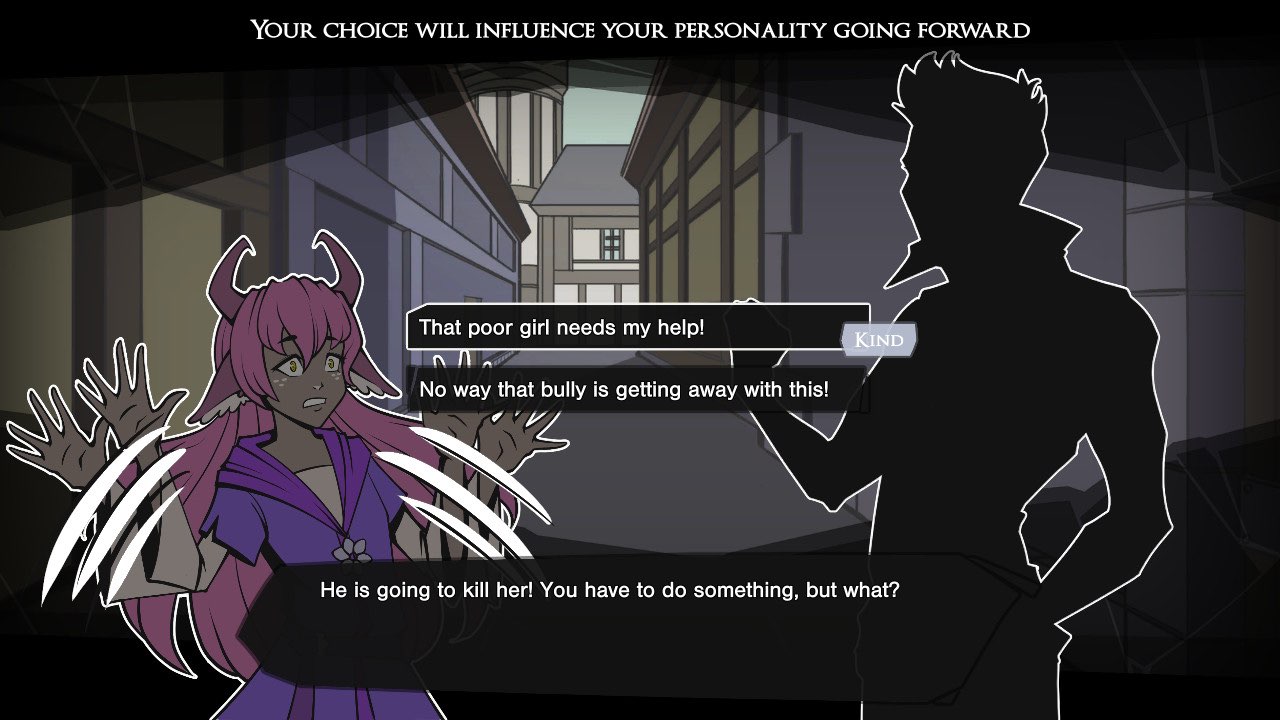 I wish Arcadia Fallen’s music was as solid as its voice acting since sound is such a critical part of a visual novel, but unfortunately it tends to miss the mark more often than it hits it. The music in Arcadia Fallen is mostly devoid of interesting melodies or cohesiveness in style, and is often annoying in its repetitiveness, with each location in the game generally having only a single music track associated with it. That means that there are plenty of moments in which a character is trying to express something serious or solemn, but because the scene is taking place in the flower shop (for example), the quirky and bubbly flower shop music is playing no matter what. In other words, the music in Arcadia Fallen is more often a distraction rather than an effective component of the game’s storytelling.

In addition to that storytelling, Arcadia Fallen introduces a matching-type puzzle mechanic into its gameplay loop that adds a small but interesting dash of variety to the experience. At certain points in the game, Morgan will need to fight demons or unlock doors by rotating a series of four overlapping dials to match a pattern. There’s also a variation of this type of puzzle that acts as “alchemy” in the game – back at Elizabeth’s shop, it’s possible to place ingredients in the various circles of the dial puzzle, and then try and combine them in specific patterns to create new potions. The alchemy portion of the puzzle mechanics is mostly optional to complete the main story, but there are a few side-quests and conversations that are connected to experimenting with these rotary puzzles, so completionists will need to engage with this mechanic if they want to see everything. 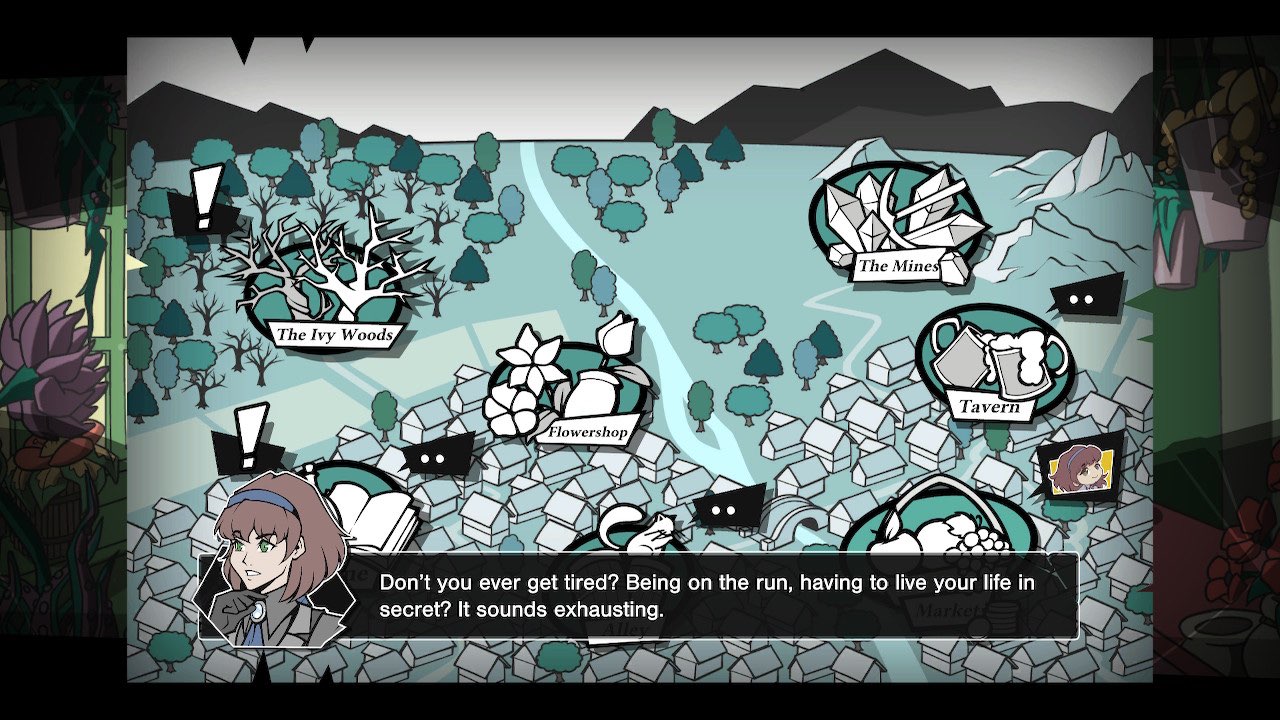 I enjoyed these challenges when they popped up during the course of Arcadia Fallen’s story, partially because they are infrequent enough to not get overly boring or repetitive. There are a few surprising difficulty spikes with these puzzles, but nothing that even the occasional fan of puzzle games won’t be able to handle. I didn’t feel much of a drive to complete Morgan’s alchemy book by creating all of the potions in a certain number of turns, but it’s a nice extra layer of interactivity that does add to the charm of Arcadia Fallen more than I expected.

By the time Arcadia Fallen was wrapping up its story, I was satisfied with the journey I had helped guide Morgan through. Most of the characters see their narrative arcs fully resolved, so it’s a clean ending to a relatively simple plot. Unlike the best visual novels I’ve experienced, I don’t think the events of Arcadia Fallen were, as a whole, compelling enough that they’ll stick in my memory for years to come or anything like that. But I don’t think I’ll forget the game’s characters and how interacting with them made me feel, and that’s a remarkable achievement for a debut game from a new studio.

While Arcadia Fallen does little to hide its limited budget and scope, and while its narrative and presentation as a whole likely won’t be remembered as the best of the genre, this visual novel managed to win me over largely thanks to its lovable and well-written cast, and the degree to which it made me feel like I, the player, was truly the protagonist of its story. Great voice acting and character art helps mask some of Arcadia Fallen’s less developed aspects, and I was surprised at how much I enjoyed its limited puzzle elements. While Arcadia Fallen isn’t quite an essential experience for visual novel fans, I enjoyed my time with it and would recommend it to those looking for a feel-good story, and I can’t wait to see what Galdra Studios does next.

Arcadia Fallen copy provided by the publisher for the purposes of this review.