[Review] Ary and the Secret of Seasons

Posted on September 8, 2020 by Dennis(@LyonHart_) in Reviews, Switch 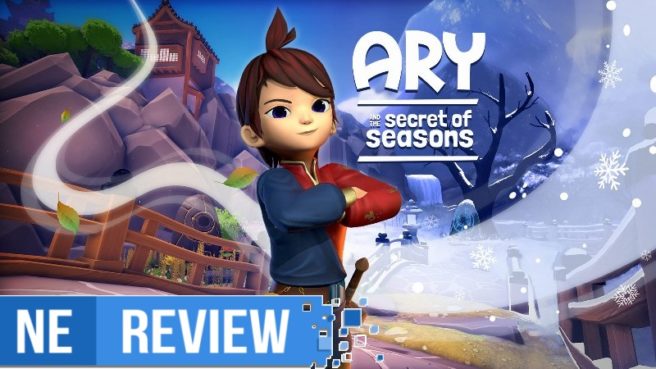 Despite games taking us to other worlds and giving us what can feel like the ultimate sense of escapism, it seems that there’s less of an emphasis these days on genuinely having fun and instead wanting to make things as realistic as possible. Sometimes it feels like wonder and awe are lost, but then you come across something like Ary and the Secret of Seasons, which exudes a magical presence and a fantastical setting you’d want to explore and live in. It has that sense of adventure, a charming art style, and a heartwarming story that, while simple, remains effective in giving an overall feeling of positivity as you play throughout. It hits all the right notes when it comes to being a decent game that’s accessible and for a wide demographic, but its biggest issues unfortunately come from an overall mess of an experience filled with graphical glitches, borderline unplayable performance in some cases, and bugs in just about every corner.

Ary and the Secret of Seasons sees a young girl named Aryelle going across the world of Valdi in search for her brother Flynn who never made it back home after attempting to succeed his father as the new Guardian on a council. With her determination to find her brother while a sudden attack from hyenas plague the world, Ary sets out with a new mission to protect the regions and wield the power of seasons, manipulating them at will to bring back balance and help her find the answers she’s looking for. 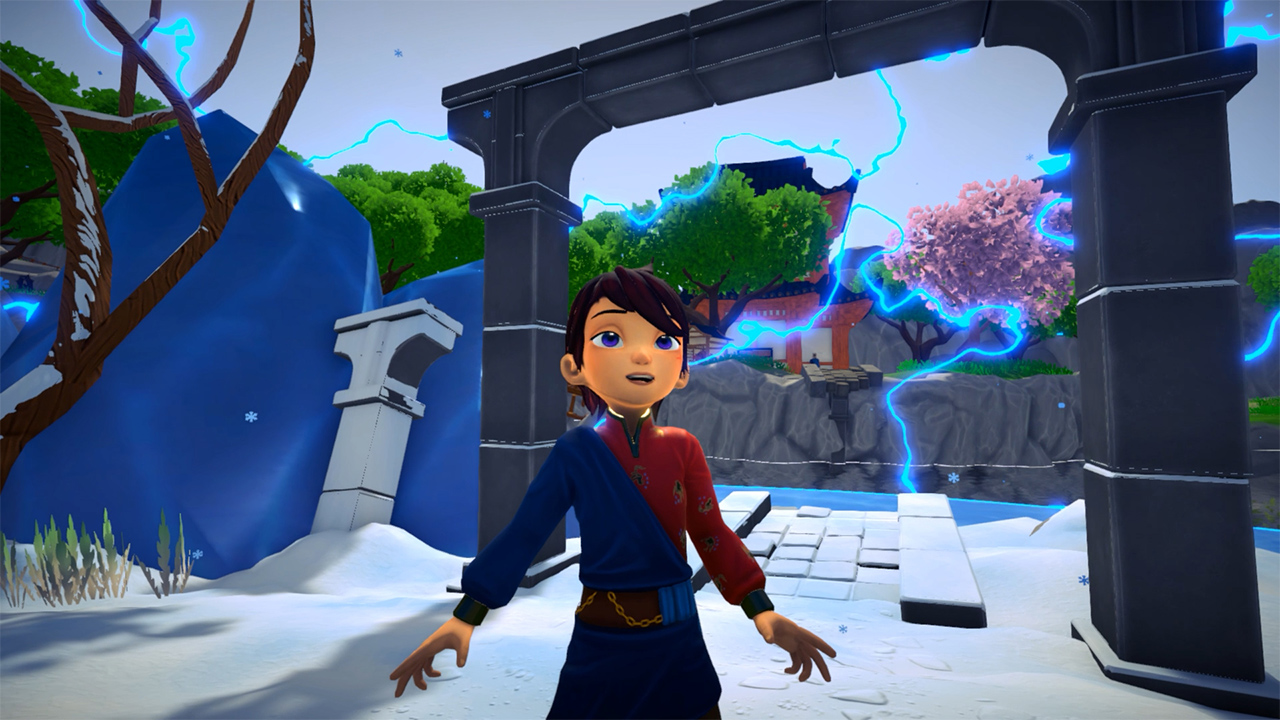 The game does a really good job with dungeon design and keeping the storyline simple, and with the inclusion of manipulating seasons to progress, the puzzles involved as well as returning areas to proceed where you previously couldn’t almost make Ary and the Secret of Seasons feel like a modern version of Zelda: Oracle of Seasons. Its humor, colorful regions themed by winter, fall, summer, and spring alongside matching abilities to get an advantage on your foes throughout your journey with the season spheres and solstice powers within keep the gameplay engaging, even if there are very few enemy types and NPCs are all clones of each other. The world is vibrant enough to overlook things like that, even though I do wish they’d do more than just stand around in an almost statue-esque manner with little life.

Of course, because of the fact that there are enemies out in the world, Ary will have to learn and grow as she aims to save everyone. You’ll meet various vendors that can provide items and upgrades you’ll need to help out with ensuring you can make it with as few scratches as possible, including permanent upgrades like increased attack power, parry power, mobility, and more – even cosmetics. There are chests riddled throughout Valdi that will give you what you need to proceed and buy more of what you want, but the only problem is that they rarely contain anything exciting as most just give you the coins you need to buy stuff, as there’s not really any other way to come across the in-game currency for the weapons and other accouterments you’d want on your journey. You’ll occasionally get abilities like double-jumping through special shoes and the sort, but just about every chest will have money, keeping the excitement at a minimum when opening one unless you’re always running low on cash. Occasionally, when talking to vendors and the sort, text boxes can overlap and just create a mess on the screen, and you never really know who’s saying what when sometimes the camera won’t readjust either. This is just a small part of a bigger problem. 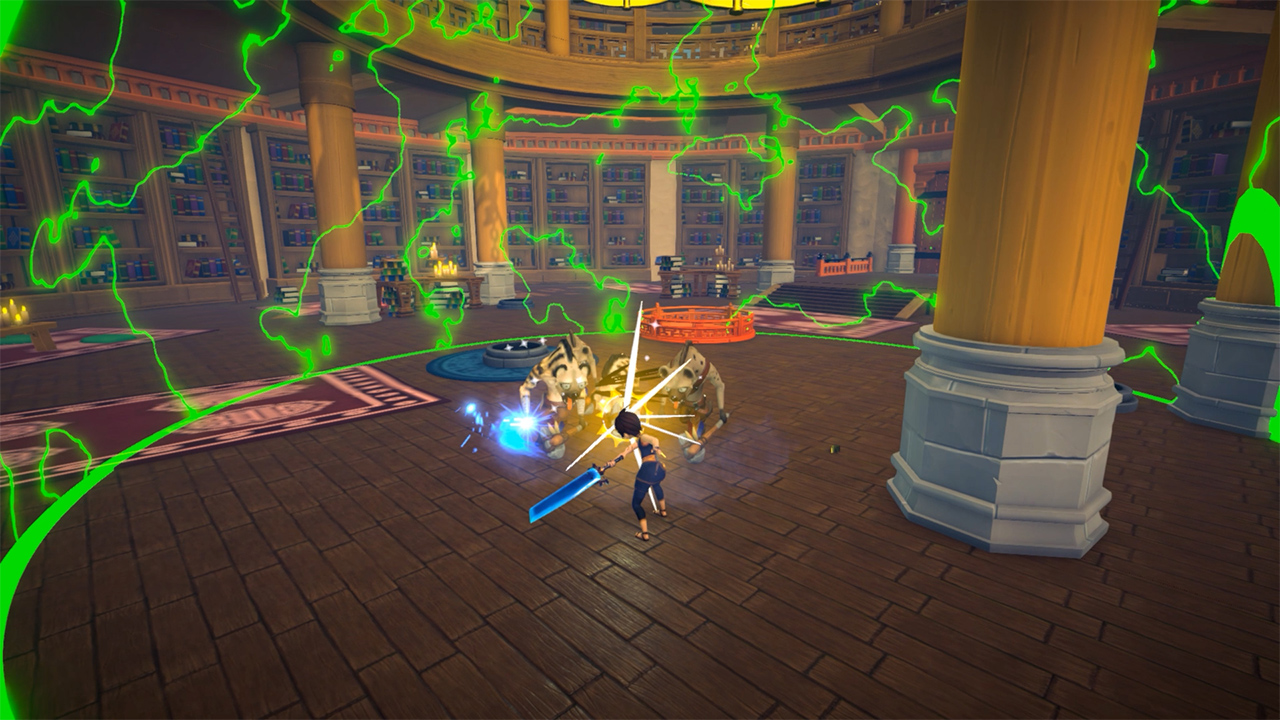 A lot of disruptions are unfortunately what kills the experience. The Switch version sees a big reduction in audio and visuals that scale back a bit of the charm, leaving colors and details feeling flat with choppiness and loading times that give you enough of a duration to make a sandwich. Whether going in or out of buildings, loading up a save, respawning from death, coming out of a cutscene or accessing a new area, loading times are long, keeping the immersion to a minimum. Draw distances are poor and some areas that seem like they would be accessible lose terrain and flora despite it not exactly being out of bounds, looking like an untouched section that was left forgotten.

Making matters worse, frames drop left and right and in some dungeons the action feels like it’d go at below 10 frames per second. This makes platforming incredibly difficult and frustrating, especially when coming across a hoard of enemies and getting killed by something invisible, only to respawn and have something you can’t see continuing to attack you out of nowhere. Too many occasions saw me entering towns with not only egregious pop-in, but some building assets not properly loading, leaving them translucent or replaced with a black void. In some cases, because you can just about jump anywhere due to the lack of slopes in a lot of structures and parts of the environment, I found myself easily clipping through areas and terrain that one should clearly not be at. Breaking the game may be a speedrunner’s dream come true, but as a reviewer that was genuinely anticipating Ary and the Secret of Seasons, it leaves me rather disappointed at the lack of attention here when there was clearly care and effort put into other aspects. Even some of the NPCs that were previously mentioned will have a an ellipses over their head signifying the ability to talk with them, but I came across a few that either had empty text boxes or when the button prompt is pressed sees no interaction occur. 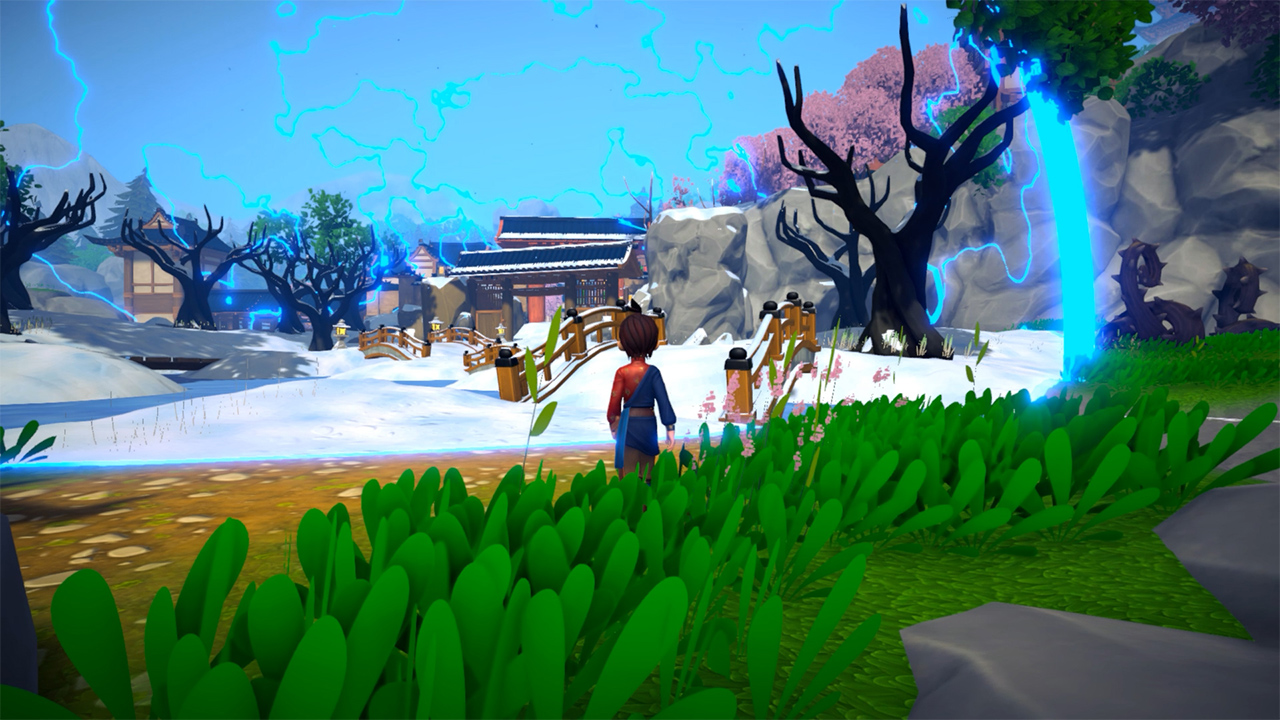 One of the more frustrating aspects outside of the bugs that riddle throughout is some of the design choices, like keeping important items throughout the world highlighted despite being unable to interact with it unless you’ve initiated the corresponding questline, so you can’t just acquire it and keep it for later if you happen to come across one a little early. With no ability to place markers on your map, you’re left to find them again later down the line whenever you do run into the associated quest for said item. Some other elements such as the user interface feel bland and a bit of a mess to go through. Though the HUD is cute and on-par with the theme of Ary, it’s just unfortunate that the actual menus themselves feel like what you’d see in a generic RPG Maker game.

While I do feel as though Ary and the Secret of Seasons could be a game worth picking up and playing if you’re looking for a sense of adventure with an almost Pixar or Dreamworks approach to the art direction and animation, the Switch version is unfortunately just not the one to go with. When I booted it up for the first time in both handheld and docked mode (handheld interestingly running much better than docked, which is where most of the performance issues occurred) my jaw dropped from what I was seeing given its performance. Ary and the Secret of Seasons feels like it has promise, but as we stand reviewing the Switch version, it’s not the platform of choice here, and it shouldn’t even have been made a choice to begin with. I’m sure updates and patches can take care of some of these issues, but now that it’s officially out for everyone to play with no update that I’ve been patiently waiting for to give it a fair assessment, as of the time of this review it’s just not adequate enough as a Switch title.

Ary and the Secret of Seasons provides a lot of charm with a complementary soundtrack that has a persistent feeling of adventure. All of this, alongside a colorful world with light season-based puzzle elements, add to the fantasy vibes and enhance the platforming that’s sprinkled throughout. The most unfortunate part about Ary and the Secret of Seasons, however, is that while the game can be charming and heartwarming, it’s hard to give the title a recommendation – especially on Nintendo’s console – when very little attention has been put into making it acceptable. The sacrifices made almost seem egregious to the point where it would have been better off scrapping the Switch version as to not have such a disappointment and fully stain the game’s appeal.