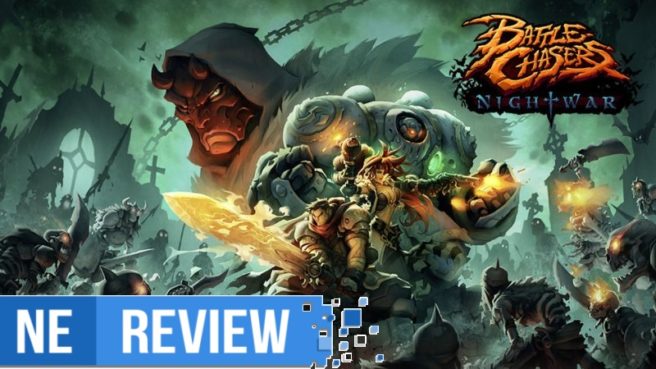 With the Switch’s boom in popularity over its past year, more and more developers are clamoring to get their games onto Nintendo’s newest hardware. While it’s an absolute treat to see indies and third-party developers finally wanting to invest in Nintendo, sometimes the rush to get onto the market can lead to problems along the way. While Battle Chasers: Nightwar has the makings of a solid little JRPG, it feels like it could’ve used a little bit more time before making its debut on the Switch.

The world of Battle Chasers actually had a fairly long life before Nightwar’s time as a video game. Battle Chasers was originally a comic book series, featuring all the characters that star in Nightwar. Our main heroine is Gully, a young girl whose father mysteriously disappeared, only leaving behind his battle gauntlets. On a quest to find her father and learn the circumstances behind his disappearance, Gully is accompanied by a varied crew of characters to help her achieve her goal. Alongside her we have Garrison, a brooding swordsman who fought alongside Gully’s father and vows to protect her throughout her journey. Then we have Knolan and Calibretto, an old mage and a mechanical war golem who join along to overseer Gully’s journey. Finally, we have Red Monika, a bounty hunter whose motivations for joining along appear ambiguous.

Battle Chaser’s story feels fairly by the book, at least in the beginning hours. Gully and company are on an airship, presumably picking up from some arc in the comic book. We are given a short, narrated story scroll to catch us up to speed on the world and character motivations. While on the airship, the gang is ambushed by a pirate crew, resulting in our heroes being blasted out of the sky and separated. While the game’s story begins to slowly unravel as you explore the mysterious island Gully finds herself on, the first seven-or-so hours feel very slow with little story progression actually felt. And when story progression is felt, its beats still feel fairly generic. More world building and lore are given to you as you explore towns and dungeons through notebooks or journals you can choose to read, but the motivation to keep going was fairly tough to muster early on. 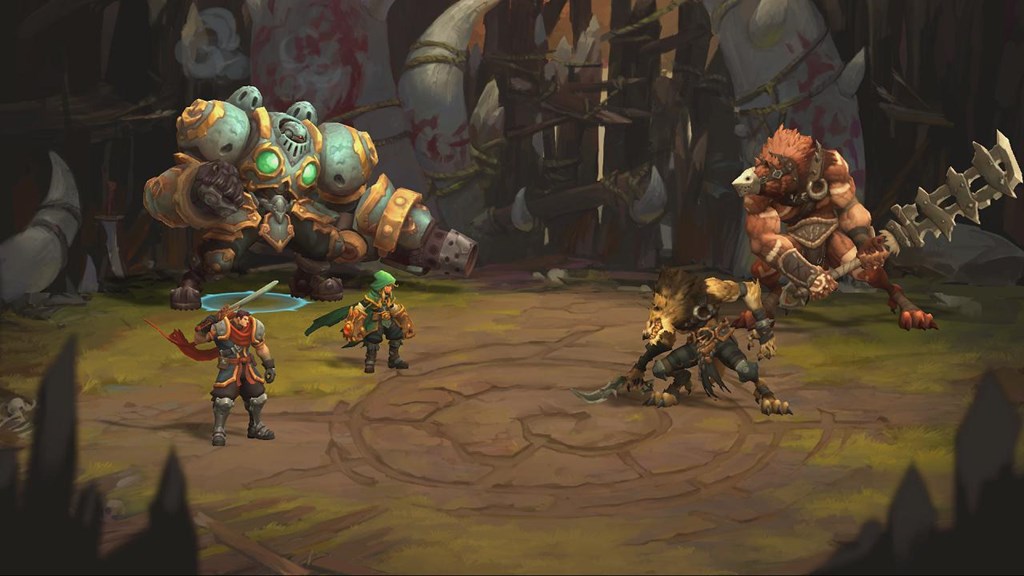 Thankfully, the gameplay of Nightwar is much more engaging than the story. Nightwar feels like an old school JRPG that has been refreshed with modern gameplay elements. Dungeon exploration in Nightwar takes place from a top-down perspective similar to the Diablo series, where you traverse an explorable area or full-on dungeon. Each character has dungeon skills that help achieve things like discover hidden areas, heal the party, or stun enemies before engaging in battle.

Once engaged in battle, the game moves into a 2.5D styled turn-based battle that utilizes full 3D character models. The thing that makes battles engaging, especially in the early game, are the status ailments you can inflict upon enemies to move battles along more swiftly. Things like stun, bleeding, and sunder can do things like harm over time or increase damage taken. This really adds an element of strategy when early game battles consist of mashing the A button. Alongside status ailments, each character has HP and mana, which can be used to perform abilities with varying affects. Additionally, Battle Chasers introduces the Overcharge mechanic, which allows characters to build up additional mana through standard attacks. While the Overcharge mechanic can feel fairly surface level, knowing how to properly utilize it in battle can be a big advantage when taking on multiple waves of enemies.

As stated before, Battle Chasers has some interesting modernizations to the JRPG formula. For instance, the game includes an entire loot and crafting system where characters can craft items and equipment through materials found along the journey. Additionally, the game’s main dungeons have elements of randomization mixed in. Most dungeons consist of rooms and branching paths to explore, complete with puzzles and traps mixed in throughout. However, the order in which these room appear is random every time, with puzzle and trap layouts shifting to accommodate. 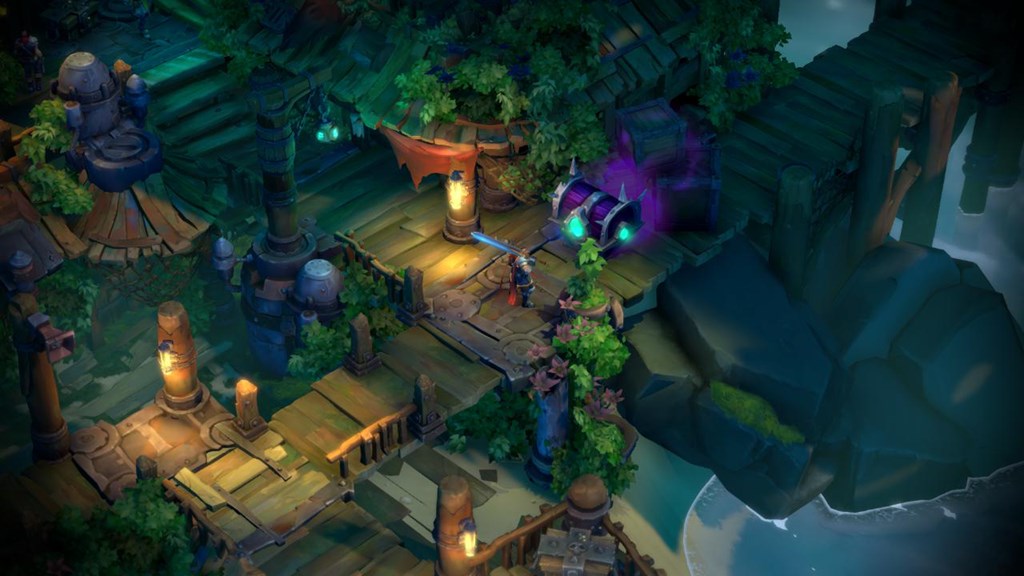 One element that does not seem modernized, however, is its quality of life additions, or lack thereof. As you progress further in the game, you’ll encounter some pretty tedious difficulty imbalances, requiring you to halt progress and grind in order to progress any further. With so many modern RPG’s introducing fast forward options, auto-attack, or even encounter rate or difficulty adjustments, it’s unfortunate that these lack of options slow down the pace even more. This brings up a few more issues that really couple into one of my biggest complaints with the Switch port: the game does not feel very well optimized for the system.

Battle Chasers is full of loading screens, and unfortunately, they are long and uninteresting to sit through. Whether it be entering or leaving a dungeon, loading a cut-scene, or even encountering enemies, most loading screens could last longer than 20 to 25 seconds. While it might not seem like that long to some, when they constantly appear, the game’s pace is bogged down that much more. For example, I encountered multiple instances where I would come across an enemy and initiate a battle, only to have a loading screen appear for more than ten seconds only to reveal a battle against one enemy. You encounter enemies constantly, and while playtime seems to alleviate battle loading screens, encountering them every time you continue your game is very frustrating. Additionally, the frame rate can be choppy while traversing the overworld map or exploring dungeons. While it’s not game breaking in any sense, it’s still a disappointment to encounter, as the game’s art-style and graphics are another high-point.

Battle Chasers: Nightwar is a JRPG that has solid gameplay and ideas, but are held back in a few too many ways to be considered great. A generic story premise, tedious progression problems, and poor optimization for the Switch make it difficult to recommend to all but the biggest JRPG fans out there. While some may find the story interesting after 15 plus hours, or can grit their teeth and push through the grinding moments, it’s safe to say that most people won’t have the patience to discover the elements that are actually refined. Maybe with a little more time, Battle Chasers: Nightwar could have smoothed out it’s many shortcomings on Switch, but for now it carries a bit too much baggage to make a lasting impact.

Battle Chasers: Nightwar review copy provided by THQ Nordic for the purposes of this review.