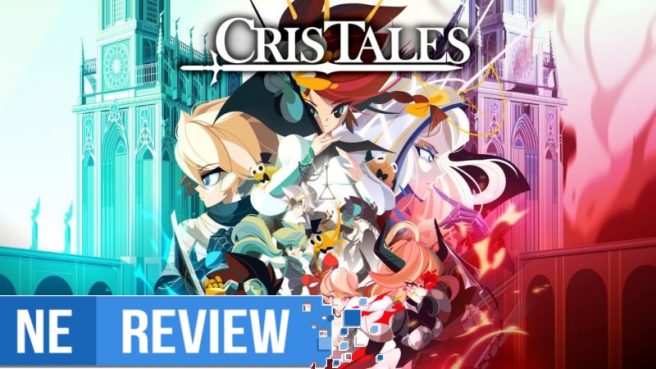 Cris Tales may have wowed us with its first few showings – colorful and whimsical animations, an interesting time-travel mechanic that not only works throughout the adventure but also in battle, and a friendly top-hat garnished frog friend that rides on your shoulder to give you tips on your powers and progression hints? Certainly, this is an unorthodox recipe, but what does Cris Tales turn out to be when all is said and done?

Crisbell is a young orphaned girl, growing up alongside others in her orphanage home. Looked after by a very tender Mother Superior, the girls are tasked with helping to care for the building and the flowers grown outside of it. It is during rose pruning that Crisbell first encounters Matias, a top-hat equipped frog that quickly absconds with a prized rose, which Crisbell is dead set on recovering. During this game of cat and mouse, Matias is finally found and it is upon this meeting that Crisbell is endowed with the powers of Time Magic. In no time at all, conflict erupts, and Crisbell vows to save her town and friends from certain ruin, a task that will take a lot of work for the fledgling mage. Her task is not made easy by the shadow of doubt cast over her by members of the town, and before she knows it, Crisbell is on the run with her friends looking for answers.

Traveling through this Victiorian-era fairy tale world is done through a world map, with areas like towns, forests, and dungeons sprawled out. Some of the locations will be locked behind the story progression, but each locale is vibrant and whimsical, with a charm one cannot compare to other games. What other titles do you know that allow you to see the past, the present, and the future in the same view? With this system, Crisbell is able to foresee the outcome of decisions being made, and in some circumstances must accept that not all things can be saved from the ravages of time. 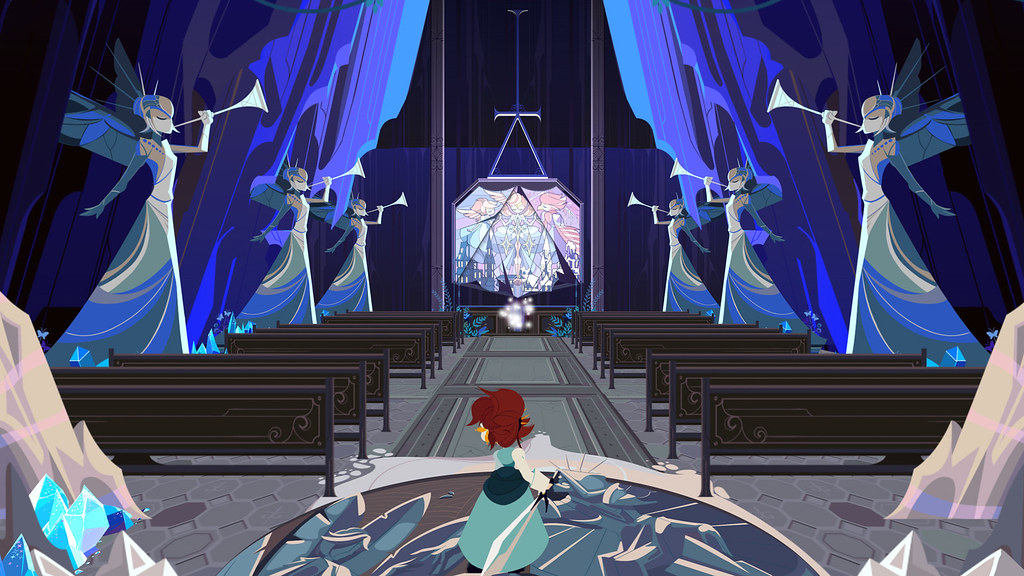 Crisbell and her friends will ultimately venture to face off against the Empress of Time herself, who is hellbent on destroying the world. While her main motivations for wanton destruction are unknown, Crisbell is spurred by the need to protect the world and her friends. With many sidequests and places to explore, the amount of content feels just right. Mateo is around to give hints on what to do next for the main scenario, but even then there are ways to get lost if you end up skipping through dialogue too fast. Take this as a precautionary warning: definitely don’t skip text, especially during the main story. That said, exploration and back tracking isn’t terrible. With the combat being fun, I enjoyed my time grinding levels and discovering combos, most of which can easily turn the tide of a fight. While there is no auto-save feature, the save points littered through the game can be used multiple times. The recovery feature of each save point does require a tent to use, allowing for a full heal of the party. Tents are a one-time use item, so make sure to stock up as soon as you can.

Controls for battle can be difficult to get used to. You can combo attacks with A button to follow up with an extra hit, and press the A button to defend against a hit from an enemy to parry or deflect some of the damage. While this seems easy in concept, the window of effectiveness is very small, and its easy to miss the mark without practicing the timing. That said, combinations of skills are where the combat system truly turns heads: soak an armored foe with water then turn time forward to inflict them with rust, making them more susceptible to damage. Throw a poisonous plant at enemies in the past, then bring them back to the present to inflict the status ailment upon them, or move a poisoned foe forward to make them take the full poison damage all at once. These are not the only combinations available in Cris Tales, but are simply the building blocks to further combos. As your abilities grow in number, make sure to experiment with the flow of time alongside your companions’ own skills. Chances are, you may stumble across something that deals extra healing or extra damage, which can really help out in a pinch. 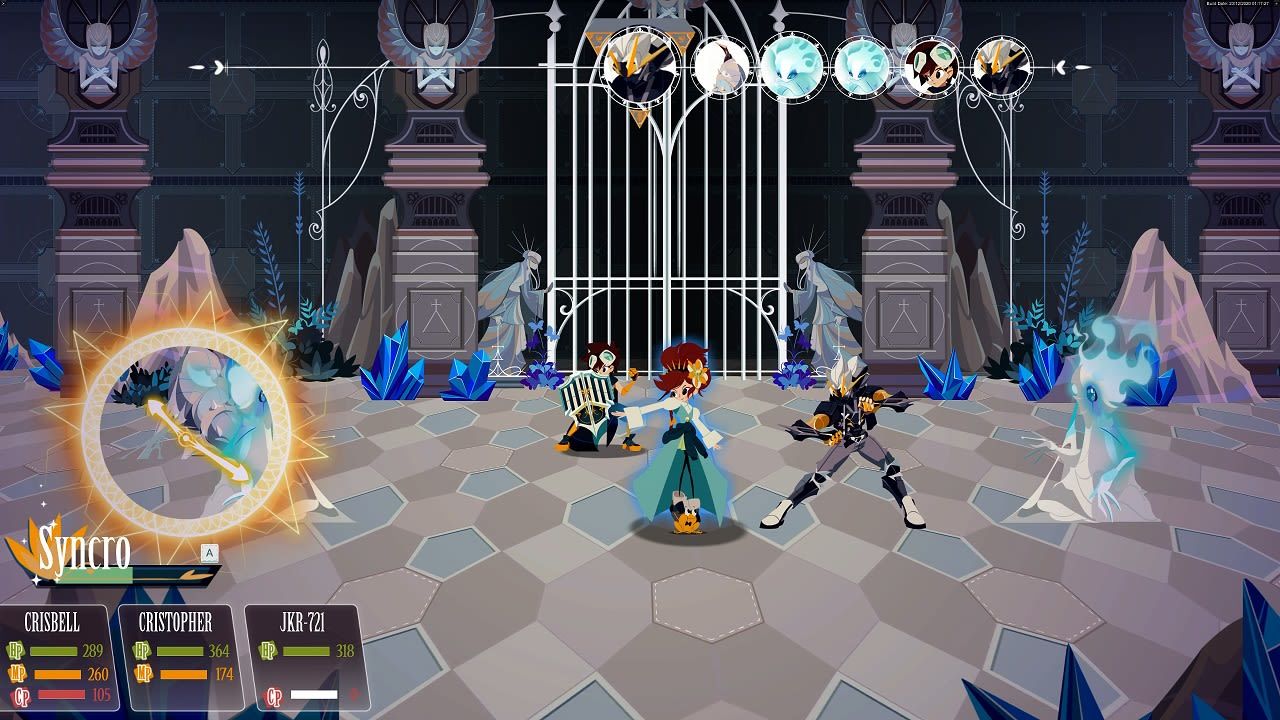 While playing, one of the most debilitating hindrances were the long load screens when random battles would trigger. The load screens in general seemed excessive to begin with, but the sheer number of random encounters can make it very frustrating to move towards an objective on your journey. Later on, as fights become less difficult when your party has more tools in their belts, this is less of an issue, but I did find myself feeling overwhelmed at several points and yearning for a place to set up a tent and heal, especially early on in the game. While I did play Cris Tales mostly in handheld mode (as I do with most JRPGs), I did find that performance was mostly the same when going for a docked experience. I will say that it looks absolutely amazing regardless of choice, but docked is like experiencing an animated movie that you get to control.

Equipment can be bought, or even found in dungeons. Weapon upgrades are easy decisions, but some gear can affect character stats greatly, causing a significant boost in speed, or in some cases a detriment. Accessories come in the form of keychains, allowing for further boosts. Collecting all the different gear available became something I challenged myself to do in the late game, for which there is no reward aside from having a nice little armory of your own to change in and out on a whim. Additionally, character building’s best point is the new skills gained upon leveling up and seeing Crisbell’s powers evolve through the story, some of which are necessary for the completion of various puzzles in dungeons and towns. The puzzle solving itself was a nostalgic reminder of Camelot’s Golden Sun titles, using unique magical abilities that affected the world around the party to open new avenues forward. While some puzzles were very easy to figure out, there are definitely some more challenging encounters that will take critical thought to overcome.

The weighted decisions in Cris Tales make it into a very replayable adventure. The main scenario itself is not too time consuming, with the journey clocking in at around 25 hours of gameplay, this is a shorter RPG like fan-favorite Chrono Trigger: another game where time travel and decisions influence the story, to the point that further play throughs will allow for different choices, different outcomes, and different story scenes. While some of the outcomes can be minor, others do seem to have a huge impact on the ending. The amount of side quests available is also pretty high, giving a large amount of optional content to complete should you feel the need to help out the people of Crystallis. How many playthroughs does it take to see all that Cris Tales has to offer? Time will tell, I suppose.

Despite the long loading times and short input windows to combo or deflect attacks, Cris Tales offers a unique and colorful experience that shines through its windows of slow pacing to bring out a beautiful story. Crisbell’s growth from a confused orphan to a confident fighter is not only a wonderful instance of character development, but an even better example of a young female protagonist in modern gaming. Turn-based RPG fans will find enough familiarity to be comfortable with the battle system, and plenty of new gimmicks to keep things interesting. While the difficulty at the beginning is fairly brutal, as your arsenal of skills and abilities grows, so too do the tools and combos for managing not only the enemies encountered, but party health and general survival. With plenty of dungeons to plunder and townspeople in need of help, there’s no shortage of exploration for the seasoned adventurer. Overall, this creates a uniquely-packaged encounter that RPG lovers must experience – don’t let this one pass you by.