Posted on September 14, 2021 by Nicholas Serpa in Reviews, Switch 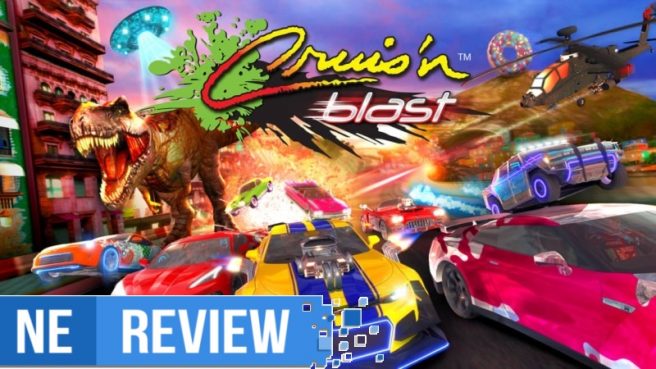 It’s genuinely challenging for me to recall the last time I experienced a game that’s as comprehensively absurd – and so confident in embracing said absurdity – as Cruis’n Blast. While delivering arcade-style racing in what’s perhaps its purest, most straightforward form, Cruis’n Blast simultaneously feels like what would happen if an energy drink company hired a group of obnoxious teenage boys to design a video game. It’s ridiculous, over-the-top fun that never takes itself even remotely seriously, and I loved every minute of it.

After initially releasing in 2017 in arcades, Cruis’n Blast has never appeared on consoles before this release on Switch. I’m still somewhat shocked that this port exists in the first place, as it’s very rare for modern arcade games to later be adapted to home consoles in this day and age (although my dreams of a Time Crisis anthology will never fade). Fortunately, the Switch version of Cruis’n Blast has been expanded dramatically from its arcade origins; while the original release only had five tracks and a handful of vehicles to race with, this version has nearly 30 courses and 23 vehicles to unlock. 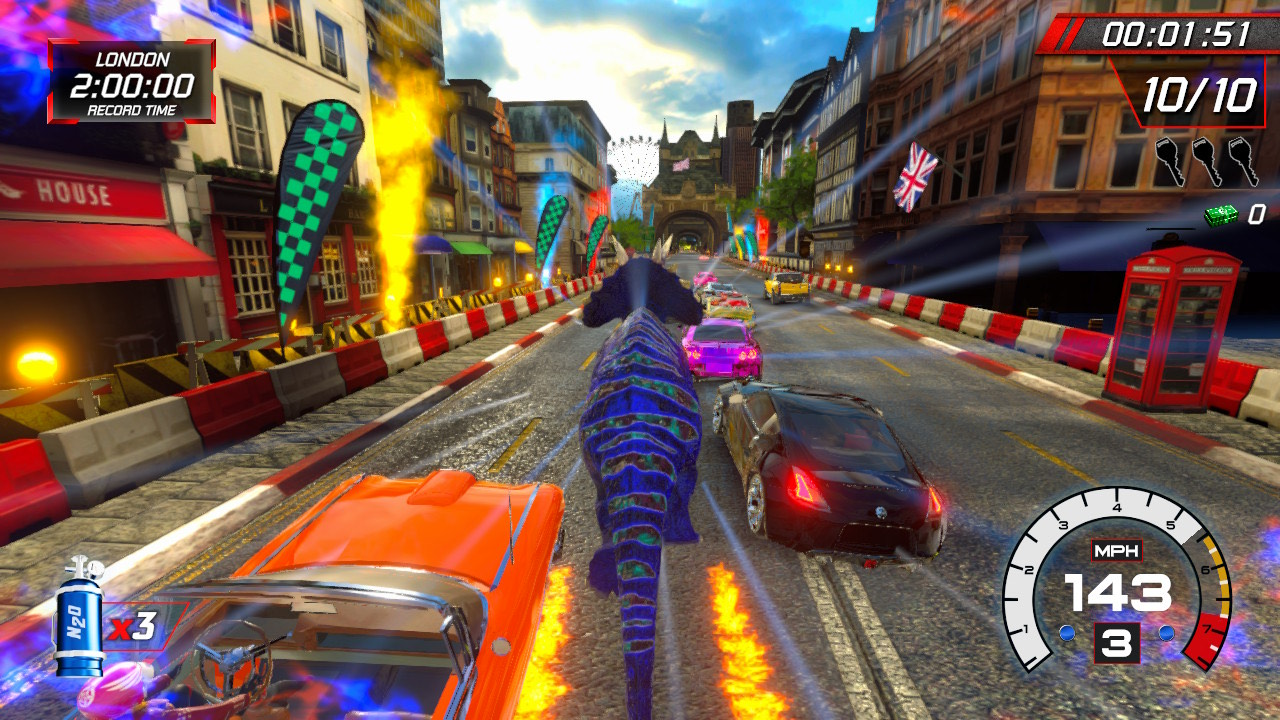 I guess exactly what constitutes a “vehicle” is somewhat up to interpretation, though. Sure, Cruis’n Blast lets you race in plenty of fancy-pants sports cars, but you can also select from a unicorn, a stegosaurus, a flying saucer, and all kinds of strange fast-moving things. Why? Nobody other than the game’s lead designer Eugene Jarvis knows, and frankly the reason probably boils down to more of a question of “why not.” I find it particularly hilarious that I can deck out my racing-dinosaur with obnoxious fuschia paint and neon lights, drift it around corners, and make it pull off freaking barrel rolls in midair… all while it makes engine noises as if it were, you know, a car.

You’ll do this, by the way, while tearing up the streets of some of the biggest cities in the world, from Hollywood to Vegas to Rio de Janeiro, oftentimes as said cities are either being demolished by said racers, or sometimes being attacked by aliens or destroyed by apocalyptic storms and earthquakes. Naturally, these scenarios raised many concerning questions in my brain. Like, do these cities actually officially sanction these dangerous races? Also, how do they keep their citizens safe when fire trucks and armored tanks are just barreling through the sides of buildings?! I need answers! 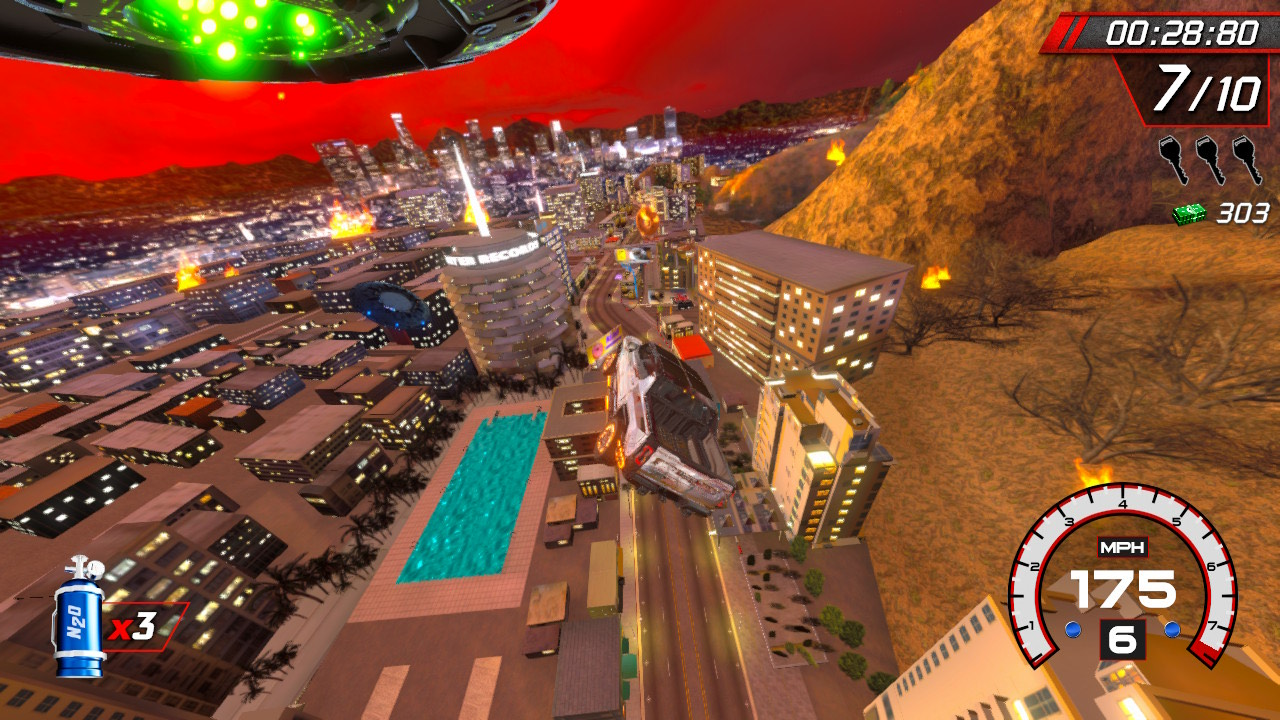 I do wish, though, that there were a bit more variety in the courses available here. That probably sounds ridiculous, and 29 courses indeed seems like a lot, but unfortunately a good 40% of the tracks here are simple reskins of other tracks in the game. For example, Rio De Janeiro has at least three variations of the same track – one during the day, one at night, and one with dinosaurs all over the place. It’s the same case for many of the other game’s tracks, so you’ll end up visiting many of the same places multiple times, and with near-identical track layouts too. It’s still better than not having these extra courses at all, but I wish the game’s designers could have gone all the way and made each environment totally unique.

So if it wasn’t clear from the outset, it should be obvious now that Cruis’n Blast has absolutely zero chill. The developers of hardcore racing sims like Asseto Corsa probably have nightmares about this game, I’d wager. The energy on display during races in this game is simply unmatched by anything else I’ve played. That energy persists even into the game’s menu screens, where you’ll hear the iconic (?), dramatically sung ballad that is the Cruis’n Blast theme song repeated over and over again until somehow, it eventually feels like the most normal part of the game.

It’s all looks and runs incredibly well on the Switch, too. While environments aren’t filled with detailed buildings and foliage in the same way you’d see on more powerful consoles, everything simply pops off the screen in Cruis’n Blast thanks to some excellent lighting design and high-contrast colors. Car models, in particular, look great, although they are glossy more in that sort of plasticky-way that a Hot Wheels toy is rather than the look of an actual vehicle. The game runs at full resolution in both docked and handheld mode, at a rock-solid frame rate to boot, which is impressive considering how quickly the game needs to load in new environments right in front of you. But how does it actually play? 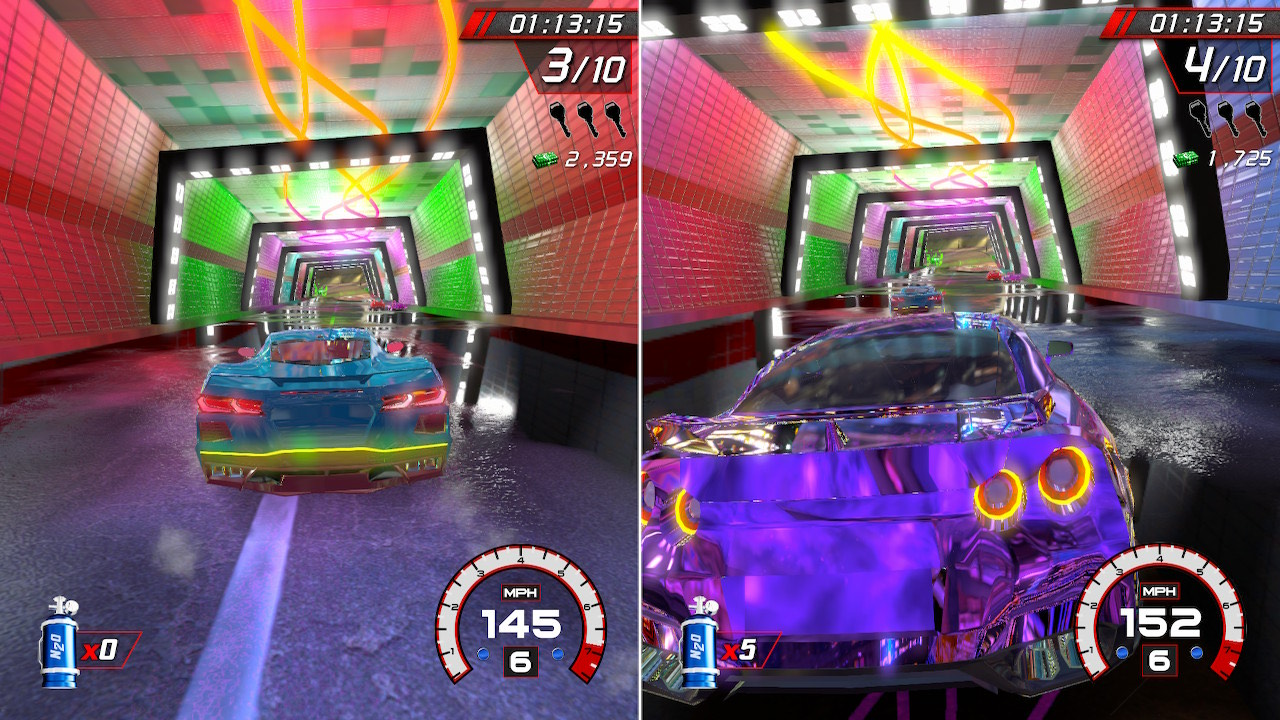 Like many other classic arcade racers, Cruis’n Blast’s driving is all about simplifying mechanics in pursuit of achieving the greatest possible sensations of speed and style. Nothing about it ever feels tactile or consequential, and it’s physically impossible to fall off the course or screw up in any severe way. Run head-on into a wall? Don’t worry, your car will probably maintain its current speed of over 100 miles per hour; it will likely just spin around a few times before magically course correcting and facing the right direction. Need to drift around a corner? Simply tap a button and vaguely point your car where you want to go, no braking or skill required. This game is designed to keep you moving at all costs, so long as you manage to keep holding the accelerator button.

That’s not to say that there’s a total lack of challenge, though, and placing first often feels like a miracle, even on normal difficulty. I play a lot of racing games, and found myself just barely scraping into first in many of the game’s races, often by only a fraction of a second. As you unlock higher difficulties, you begin to realize that there’s a decent level of understanding required of the game’s mechanics in order to succeed at high levels. Drifting, for example, may initially seem idiot-proof, but holding one long enough can result in a sizeable boost that can make a difference in bringing you forward during a race. Sideswiping cars – if you can catch them, that is = often wrecks them entirely, which is a crucial strategy for slipping up a position or two. And there are a good number of shortcuts and alternate routes available on many tracks that can shave valuable seconds off your time, assuming you drive well enough through them. 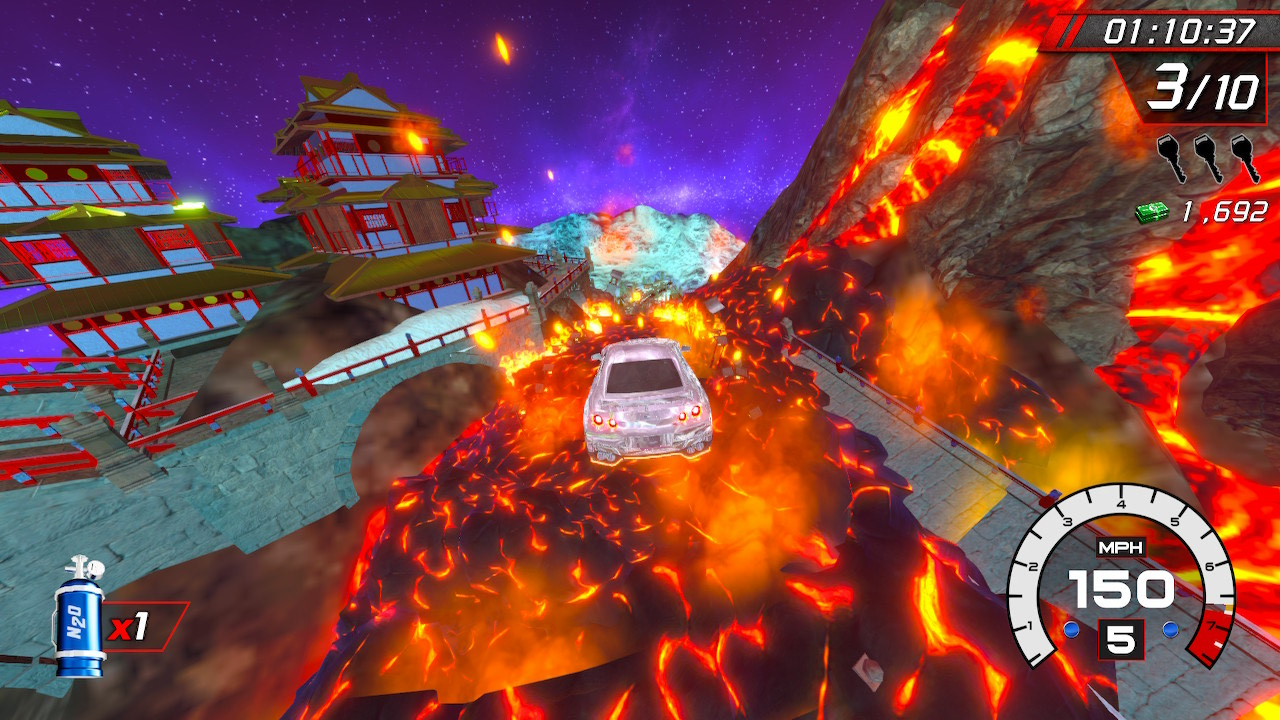 Now, I’m not going to sit here and try and convince you that Cruis’n Blast is some tightly designed, immaculately crafted racing game – even Mario Kart has more depth, not to mention a higher skill ceiling – but despite its overall simplicity, the racing in this game is just pure fun. And there are a decent array of ways to experience it in this Switch port, too. World Tour takes you through six sets of four races each, with the next set of courses being unlocked upon achieving a certain rank on whatever difficulty mode you are playing on. You can also play individual races on any course (once you’ve unlocked it) or try and beat your best time in a time trial mode.

There is also local multiplayer – both via splitscreen and local wireless play – for up to four players. I’m really glad this is here, because playing on the couch with a friend is a great way to replicate the arcade experience. My fiancé isn’t a huge gamer, but she was laughing out loud at the surprises that each track held, and the controls were simple enough that she could jump right in almost immediately. There’s no online multiplayer present, but frankly, I’m not sure if races are dynamic enough to justify the mode’s inclusion – it would be a nice option to have, but I didn’t miss it much because I don’t think playing that way would have felt any different from playing in single-player mode.

Cruis’n Blast does not care about accurate driving physics, realistic environments, or even that you’re racing a car at all. All it cares about is that you’re having fun, and it mostly aims to do that by pushing you as quickly as possible through its exciting, over-the-top courses that never failed to surprise me. I was smiling, and sometimes laughing, the entire time I played Cruis’n Blast, and in a world where many racing games seem to be leaning more and more towards hyperrealism, it was refreshing to experience a game so confidently designed to ignore that status quo and be its own thing. To me, that’s something special, and it all makes Cruis’n Blast a must-play for people who like their racing games as fast and weird as possible.

Cruis’n Blast copy provided by the publisher for the purposes of this review.