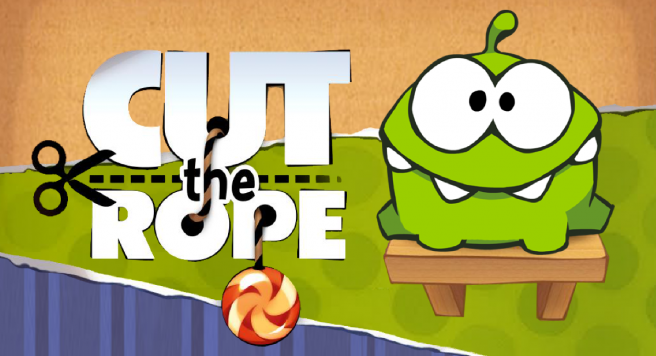 Ever go to prom? Remember the overwhelming tension and excitement surrounding the build-up to the big day? Rushing to get a last-minute suit vest the same hue as your beloved sweetie pie’s dress, making sure that painful last payment on your limousine rental went through, flipping through your anthology for the optimal Ja Rule record on the way there to set the mood just right… ah, I can almost feel it as though it were yesterday. In fact, my prom was yesterday (I’m in the Navy), and the most vivid memory I have of that fateful eve was getting my mullet trimmed and cut into a bowl cut earlier that afternoon.

While there’s surely no surrogate to be had for a proper trim and cut, with the recent release of Cut the Rope from hitherto unknown Russian developer ZeptoLab, you can now come close to replicating the same pleasurable feeling I experienced at the hands of the barber in the comfort of your home with your 3DS stylus. At a price of $9.99 (compared to the lousy $17 run-around deal I got for a pretty standard bowl shape), Cut the Rope checks off every box a figurative contemporary downloadable game assimilates, and through sheer content and professionalism, releases as one of the most polished and notable puzzle titles to be consumed on the 3DS eShop. Om Nom. 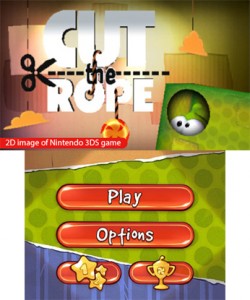 The overarching premise of Cut the Rope is simple: land a peppermint into a cheery li’l green monster’s gullet by guiding said mint through a bite-sized, gravity-based course. The main dynamic of gameplay falls upon, you guessed it: cutting rope; the mint starts off suspended in one location of the touch screen tied to varying lengths of rope, and by manipulating its course by cutting one attached to it and letting the laws of physics enter the fray, you can hopefully steer the gameplay object into the goal’s waiting mouth.

Unlike other recent releases on the 3DS eShop (ahem, Tangram Style), Cut the Rope does an exemplary job of synchronizing with how something (in this case, gravity) should actually feel; being a game that relies on an intuitive grasp of physics, movement, and momentum, this is very important, and ZeptoLab knocked what should be implicit function out of the baseball park. Gameplay “feel” manages to be extremely accessible while still allowing for highly complicated and complex possibilities, and is imputed with a very interesting nuance; much of the game is seeing the solution to the puzzle in ya head and then executing, which can sometimes only require a handful of legitimate control interactions to solve a puzzle. In this way, Cut the Rope does have a limit in that it won’t please those in need of constant control and tactile satisfaction, though such a maxima can hardly, in a practical sense, be considered a knock against. 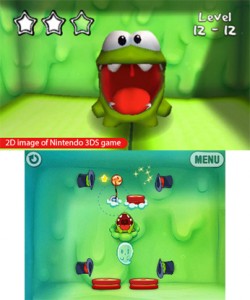 Ascribing to the the expected genre norm of the truncated puzzle experience is a delectable chord of brevity; being able to restart a level or skip a level that’s been giving you a berating is but one instantaneous press of a button away. It’s but the grandest symbol of imperative gratification this side of Gaijin Games’ fantastic Runner2.

This is not to say Cutting Rope is an abridged, myopic, granular experience, mind you me. ZeptoLab did a truly notable job of seamlessly incorporating scores (emphasis on scores) of creative and interesting gameplay motifs– anti-gravity bubbles, spring ropes, attack spiders, you name it– while still shaping each of the provided three hundred(!) levels to last between a ten and twenty second period. Progression, distinction, and metamorphosis are all masterfully achieved nary the cost of ephemerality as you and your brain traverse the fun and mentally stimulating ways to solve each level.

Also aiding in the fight against Cut the Rope’s rarefaction is the attention given to socially familiar aspects of the modern, single-gameplay-axis tactile puzzle genre. Accomplishment gradients in the form of optional-to-grab stars add a excellent element of scalable difficulty and replayability, while an extremely depthlessly professional aesthetic brings everything back to that addictive, pick-up-and-play atmosphere that’s

Though Cut the Rope won’t give you an intimate, memorable experience, it will certainly impress you with its professionalism, plethora of levels, simplistic-yet-creative level design extrapolation, and undivided attention to streamlinity. While it’s no substitute for an afternoon at the drug store, Cut the Rope sits alongside industry standard Angry Birds as a game that begs to be devoured by the masses. In fact, I think it already has: Its aesthetic is very lurid and marketable.