Posted on July 7, 2021 by Campbell(@CampbellSGill) in Reviews, Switch 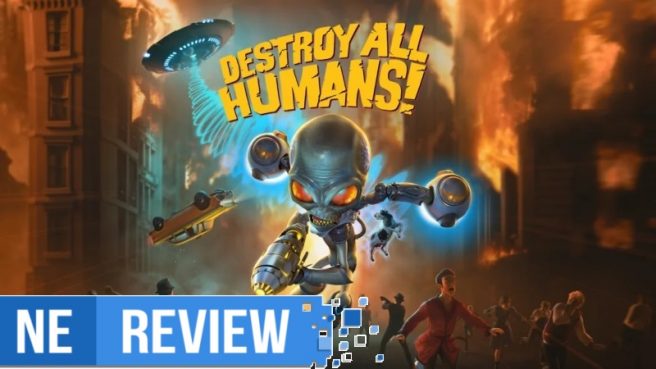 There’s something so undeniably infectious about the sci-fi films of the 1950s. After all, who can resist the charm of poorly-customed aliens, tinfoil flying saucers, and melodramatic acting? Destroy All Humans! understands this allure well – and turns the formula on its head. First released in 2005, this reverse sci-fi story puts players in control of an invading alien on a rampage against the human race. Having enjoyed a cult following ever since it debuted on the PS2, it was remade for its 15th anniversary in 2020 with the promise to preserve the original experience while polishing it up with an HD coat of paint and a handful of tweaks to the user experience. Now that this reimagined release has made its way to Switch, the natural question arises: can it successfully abduct an audience on Nintendo’s hybrid wonder?

Shockingly enough, Destroy All Humans! puts players in the role of an alien warrior named Crypto-137 who arrives on Planet Earth with a single mission in mind: to destroy all humans. His journey initially begins as a search for a missing comrade, but eventually, it morphs into something much larger as figures as diverse as the US military, the media establishment, secret agencies, and the innocent public all get caught up in a war of the worlds. The plot might sound as stereotypically sci-fi as they come, but that is entirely by design. Positioning itself as a playable B-movie, Destroy All Humans! revels in parodying its genre. The plot pivots between melodramatic recreations of conventional alien invasion action to parodies of 1950s American culture and politics – the game has more than a healthy serving of communist jokes, for example. Running commentary by Crypto and his alien master (coincidentally and delightfully voiced by Richard Horvitz of Invader Zim fame) makes things even more lighthearted as the aliens mock and marvel at the oddities of human culture.

But how does one go about exterminating humanity? According to Destroy All Humans!, it’s all about employing a healthy mix of third-person-shooting action, aerial flying saucer attacks, and light elements of stealth and espionage. The gameplay largely revolves around switching between these three styles in its mission-based structure. You’ll be exploring towns and military bases on foot for the bulk of the game, either blasting your way through every human unfortunate enough to stand in your way or disguising yourself using holograph technology to try and blend in among your future prey. 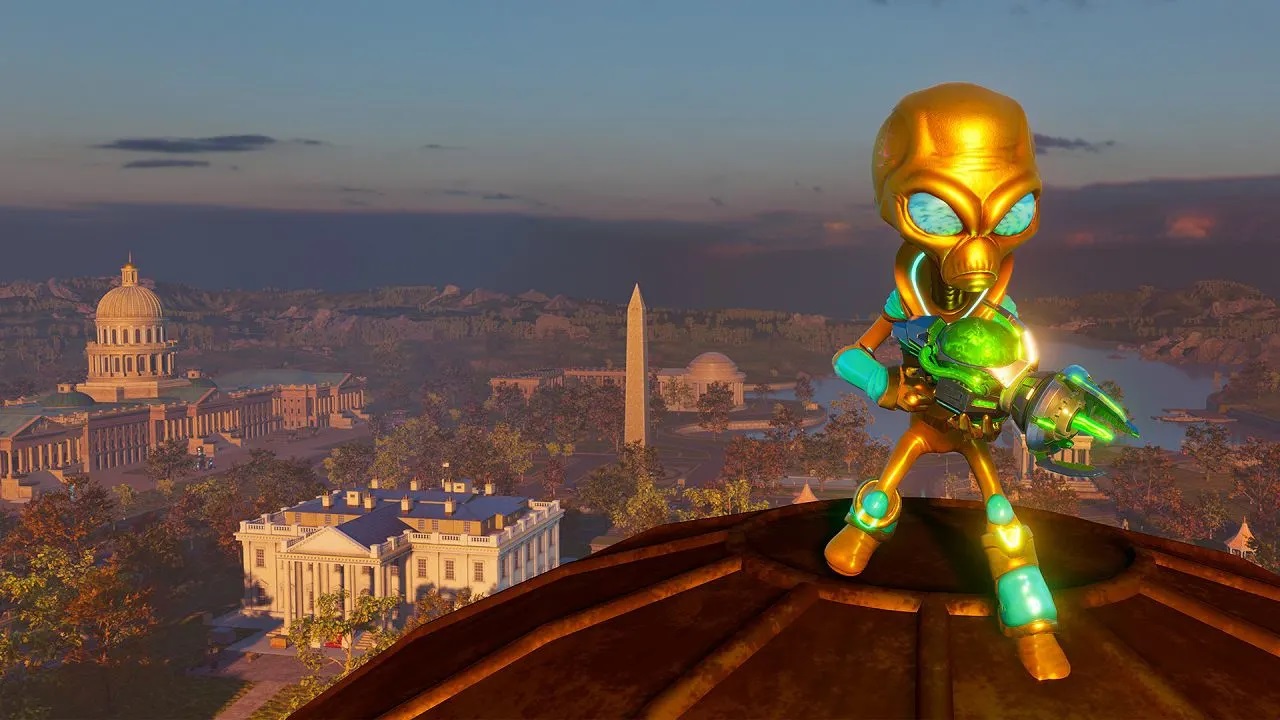 The action sequences feature a healthy dose of variety both in the enemies you face and the weapons you use. Sometimes you’ll simply mow down innocent bystanders who put up no fight at all, but for the most part, you’ll be pitted against military tanks and even mech suits as a one-alien-army against the strongest artillery the human race can throw at you. An arsenal of electric blasters, grenades, and vaporizer rays along with the ability to make brains pop out of your enemies’ heads allows for basic yet competent variety in combat encounters, even if things rarely get too challenging. Brief segments where you get to take control of your flying saucer and wreak havoc on your surroundings provide welcome doses of visceral, destructive satisfaction after traditional hand-to-hand combat.

All that being said, it can’t be helped that sometimes the gameplay can feel too simple for its own good. It largely sticks to the same few types of levels, whose novelty can wear off after dozens of rehashes. The action-based gameplay is also often broken up with stealth sections, which are not inherently offensive in their own rights, but certainly lack the excitement of the rest of the gameplay and often outstay their welcome.

Even then, it’s the attitude that really makes Destroy All Humans! such a cult classic. It thrives in violent absurdity: perhaps you’ll face more than a few missions with near-identical objectives or structures, but there’s no resisting the ridiculous bombastic of demolishing picturesque American towns, squeezing brains out of your victims’ butts (yes, really), and then blaming it all on those darn communists. The gameplay in itself certainly won’t win any awards or rewrite the formula of its genre, but when paired with the game’s irreverent style, there’s plenty of fun to be had. 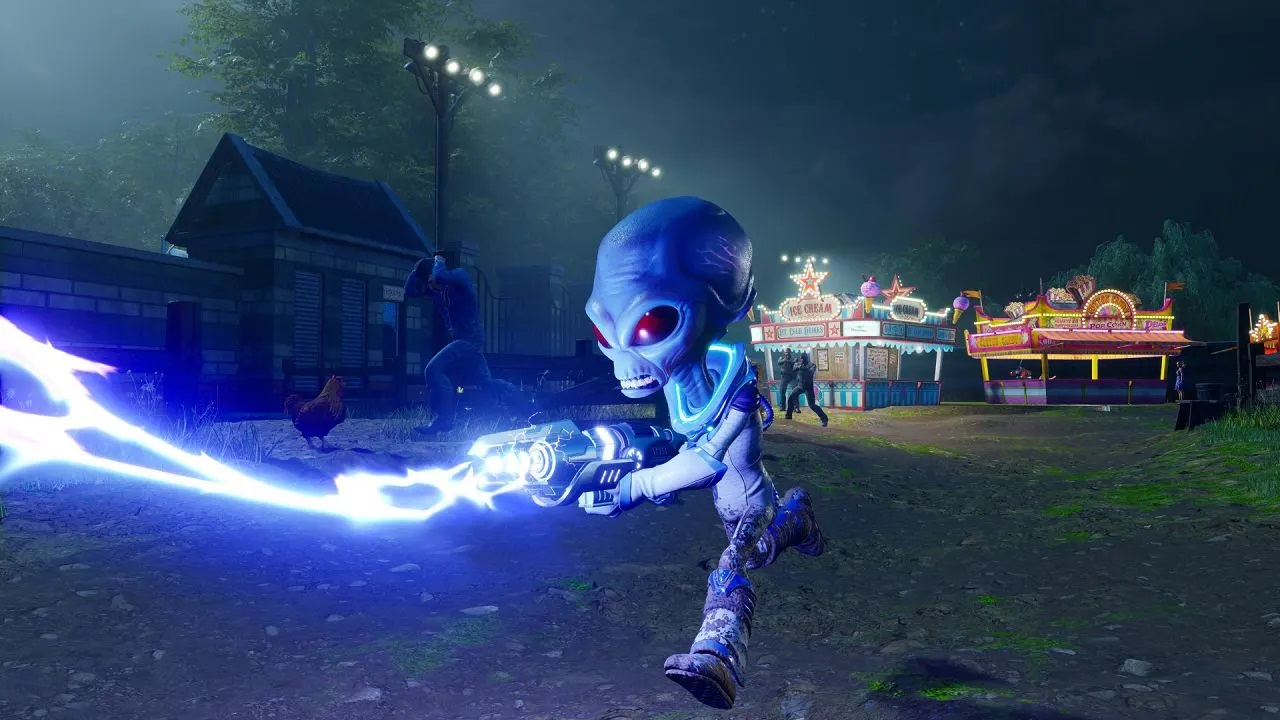 Alongside its narrative, the presentation in Destroy All Humans! similarly takes advantage of its setting with a satirical take on the art and culture of the 50s, featuring everything from sensational news headlines to picturesque downtown diners to cheesy movie posters that introduce each level. All this style has been immaculately preserved in the remake, having been completely rebuilt in Unreal Engine 4 to feature new character models and environments that pair the same classic designs with sharp, modern graphics. It certainly isn’t a technical stunner, but it remains a vast improvement over the original – to a certain extent, at least.

As should likely be expected with Switch ports at this point, Destroy All Humans! on Nintendo’s console is a graphical far cry from its counterparts on more powerful hardware. The resolution often plunges to muddy pixilation, environments are severely lacking in detail, and many textures are little more than blurry patterns. Even the load times can go on for far too long – sometimes more than 30 seconds at a time – which is already tedious enough, but it becomes a major hassle if you end up failing a level and have to wait half a minute before you get back into the action. At least the performance sticks to a near-locked 30 frames per second, but it’s doubtful that this one positive quality will make up for the other technical shortcomings. Destroy All Humans! on Switch is a visual improvement from the game’s first release, but surpassing such a low bar isn’t exactly a monumental accomplishment. By no means is this a low-effort port, but it’s disappointing that such an otherwise enjoyable package arrives in a highly compromised state.

Over a decade and a half after its first release, Destroy All Humans! has more than earned its status as an action cult classic. Brutally over-the-top action paired with exuberant satire makes it an addictive experience, even if repetition and a barebones gameplay loop can sometimes set in. This remake polishes up that core gameplay loop with a fresh new look that respects its origins, breathing new life into this worn-out spaceship – even if the Switch version introduces more than a few compromises. Lengthy load times and a sometimes unacceptably low resolution can make it difficult to enjoy all that the game has to offer, meaning that this version’s appeal relies solely on the importance of portability. If all you want is to eradicate humanity on the go, then this release provides a serviceable solution, but if you have anything else in mind, consider abducting other platforms for scientific experimentation instead.