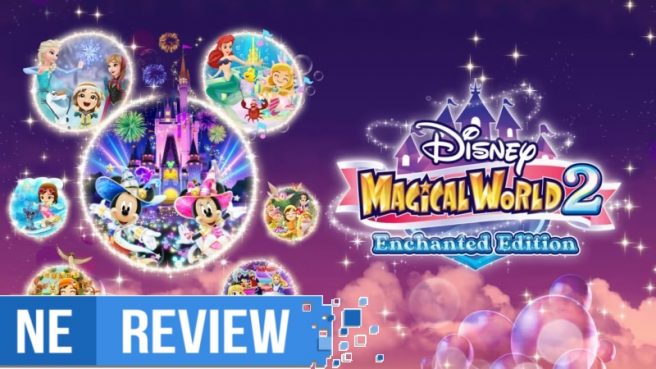 Due to expenses and geography, not everyone is able to visit Disneyland or Disney World, but thankfully video games have always made the company’s various characters and properties come to life right in your own home. This was especially true with the aptly named Disney Magical World when it released on 3DS years ago with an entry way not only into visiting a land known as Castleton, but running your own café within it that involved getting to know and throwing parties with some of Disney’s most famous characters. Disney Magical World 2, and by default its newly ported Enchanted Edition on Switch, essentially reworks the foundation of the previous game, but with a crisp new facelift and having all DLC packaged in. It’s a fantastic time that’s great for not only fans of Disney, but management sim fans as well.

Disney Magical World 2: Enchanted Edition has players visiting the magic kingdom in the form of Castleton, a vibrant and welcoming world where Disney’s most recognizable characters live and hang out. When you visit, however, you’re immediately introduced to Mickey and Minnie who welcome you and tell you all about what’s going on there, primarily the fact that they have a rundown café that hasn’t been used in quite a long time that they want you to spruce up and run. After a quick song and dance and meeting the King of Castleton who designates you as an honorary member and new owner of the café, you and a new manager friend get right to work on adding yet another lively place for people to visit. Though running a successful café is the primary goal, it’s the other sub-stories of which each property has their own that will be the main driving point for its gameplay, because even though you’re looking to run a successful café, you can’t really make anything without the necessary ingredients for all the food, sweets, and drinks you’ll unlock and create throughout your playthrough. When finding new recipes and ingredients, your voyage will take you through the likes of Kauai with Lilo & Stitch, Arendelle with Elsa, Anna, and Olaf, into Atlantica with Ariel, and many more locations through the portals scattered throughout Castleton’s main square. 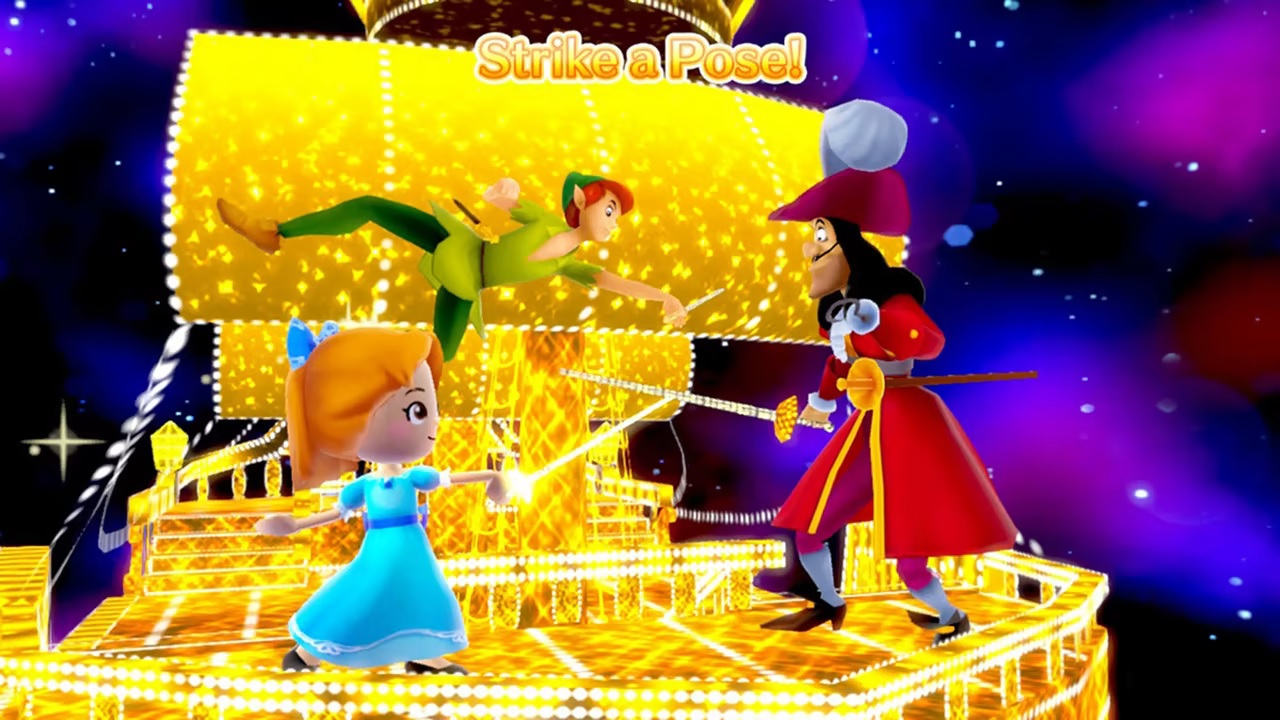 Outside of its cafés and quests, those familiar with Animal Crossing will likely see a lot of influence and get comfortable with the structure of the game rather quickly. Your clock is tied to your system, making any dates and current minute + hour in real-time. This also brings with it seasonal events, and at the time of this review since we’re in the Christmas season, Castleton and its inhabitants are all decorated with a festive coating that really get you in the holiday spirit. With the world lathered in gift boxes, Christmas trees, colorful lights, and a plethora of Disney characters wearing extremely fashionable holiday garments, you really get that sense of Disney magic and aura this time of year. Not only does the world change visually, but of course you’ll have the chance to buy and craft exclusive holiday-inspired items from Scrooge’s shop in the form of clothes and furniture to wear and use for both your personal home and café. A lot of these items come as part of a larger whole, with full on themes you can use to design your café and earn special bonuses under certain conditions. With hundreds and hundreds of items to buy and craft, it gives collectors plenty to do and work towards. A lot of these sets are extremely pretty also, and with what feels like endless themes for just about every Disney property, vibe, and atmosphere, being able to set these themes in bulk or mix and match between them for both your house and café is a lot of fun and gives more of a personal touch to how you design.

One big flaw, however, is that in the café there are certain things that are set in stone – like the front counter, dining tables, and stage – but at the very least you’re able to accent the café with plenty of other furniture pieces and place them on top of tables, on the stage, on walls, and various other locations of the café, but even this can feel a bit limited at times since not every part of the café is accessible either. For example, you can’t place items and furniture in the middle of the floor of the café, and this is usually indicated by a red square under the item that’s being hovered. Presumably this is due to the fact that as customers come in and make their way to a seat, it’s to avoid any sort of obstacle that would keep them from doing so. It’s just a shame that when you really want to go all out – even though you can absolutely make a café look amazing even with its item limit – you’re forced to just deal with something a little less satisfactory. 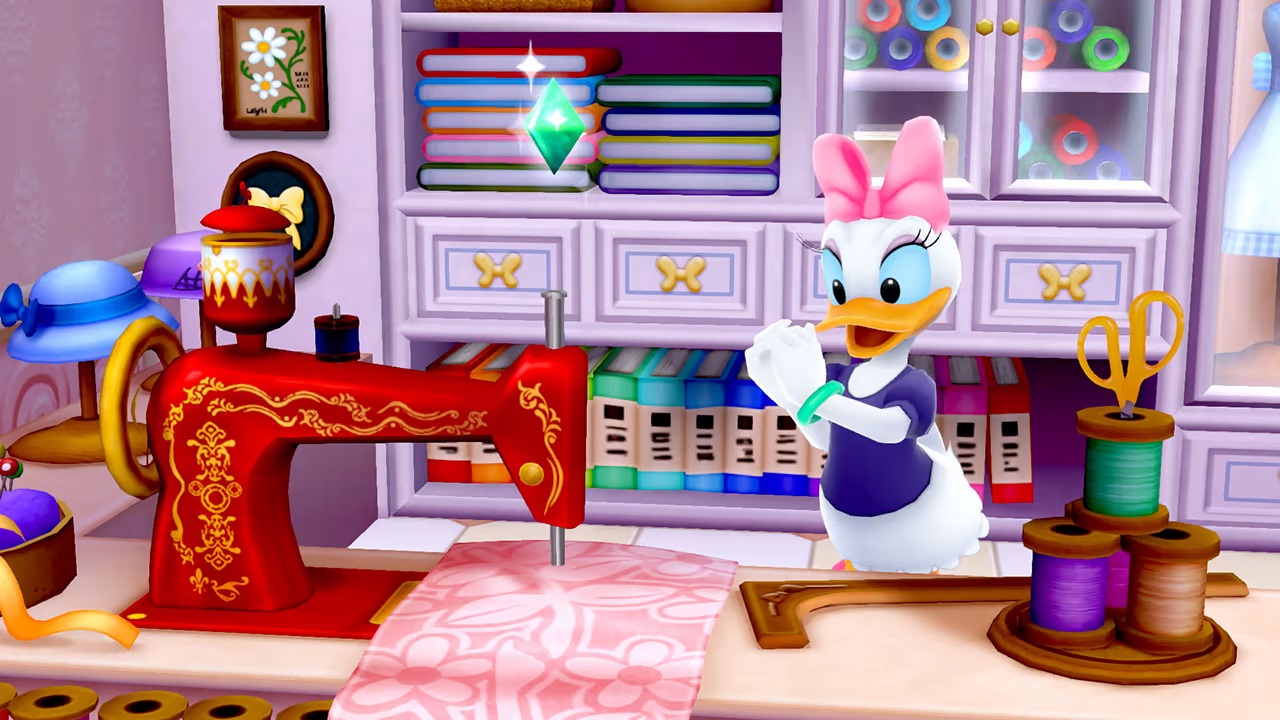 Everything in Disney Magical World 2: Enchanted Edition does a good job of complementing each other and very little feels like an afterthought. Those looking to just focus on the café or dungeon crawling or collecting won’t be able to do one without the other, as throughout your time with the game you’ll be collecting stickers you receive from various activities that act as a sort of progression tool as well as in-game achievements that give you access to new areas, features, and recipes so you can craft more. These stickers also serve as a means for level-balancing for quests in dungeons, so you won’t be able to just run through one world’s entire story in one fell swoop without upgrading equipment (which is mainly an outfit and a wand with HP and DMG stats) and completing requests for other characters and passerby.

Disney Magical World 2: Enchanted Edition has an extremely light component of multiplayer to it that unfortunately hasn’t really been upgraded much from the days of the 3DS. I was hoping with this Enchanted Edition that one would be able to visit another player’s Castleton (or at its minimum the café), but instead the only multiplayer component or “replacement” to StreetPass is syncing to the internet briefly to download the data of other players at random (not even those from your friends list) that then will show up sporadically placed throughout the kingdom typically standing still. Depending on what’s also going on at the time in terms of events, talking to them will typically yield friendship medals and/or festive medals (for the holiday season) or any associated medal corresponding to an event. These medals are rather useful because much like your revenue that you’ll generate from the café, this will also serve as a separate currency to buy more exclusive items in the shops alongside the “Nice! Points” you’ll get for wearing outfits that are considered fashionable. I just wish there was more to it than a simple “hide-and-go-seek” element to it that felt more personal and connected instead of downloading glorified profiles. 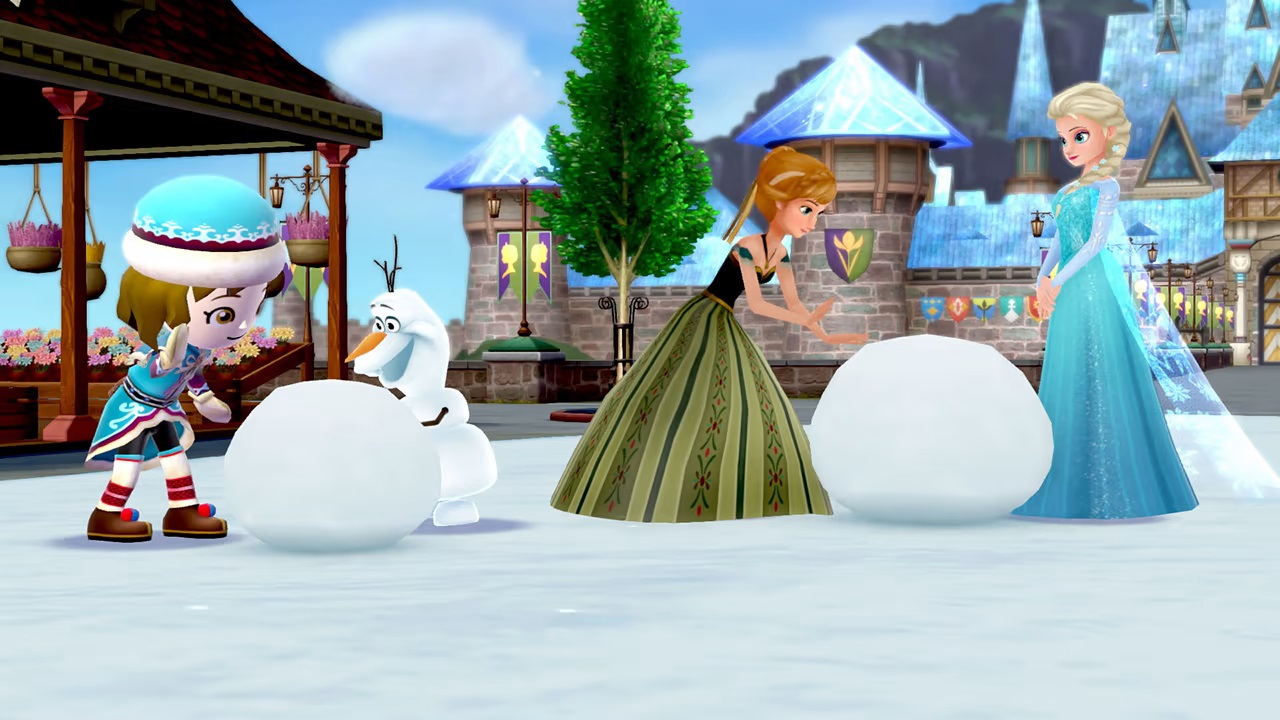 What is neat, however, is that for everyone that does visit whenever you sync to the internet, you can view their player cards and see the type of outfit they have and view a favorite photo they’ve taken from the game. Unfortunately, to add to the list of cons with this, the photo mode is actually extremely bad in Disney Magical World 2: Enchanted Edition, which is a little absurd considering how often they want you to take photos via requests, missions, and dreams that you can encounter once you’ve unlocked enough puzzle pieces to generate the dream through the completion of certain tasks. One would assume that whenever photo mode is available, at its most basic, you simply aim and take the shot – never mind the field-of-view, filters, contrast, and all that – and there it is, but for some odd reason the in-game screenshots are no different from using the screenshot button on your Switch as all of the overlay and text is still leftover, ruining any shots that had any potential of being semi-decent. It’s quite comical to see a lot of people’s screenshots still have the button guides and words like “take a shot” plaguing favorite photos.

It’s hard to say that Disney Magical World 2: Enchanted Edition is a great port when all that really happened here was a resolution bump that looks identical to videos you can find from years ago of the game being played through 3DS emulators. However, there’s no denying that it’s a great game, and for fans of Disney and simulators, it will keep you busy for quite some time. Some bugs and unoptimized assets tend to bog down the experience, including the player disappearing while changing clothes, audio glitches, icons not showing up in certain instances, some theme preview images still having their 3DS resolutions, and scripted events that don’t trigger. Ultimately though, it’s nothing that took me away from the overall enjoyment of the game, especially when I naturally clocked in over 80 hours without even trying. Sure, it’ll feel repetitive to some, and I did find myself almost avoiding certain activities because I was so tired of doing them or some variation of it, but it’s neat being able to go around the few worlds and getting to speak to all these characters we grew up with and helping them out. Whether you’re trying to unlock all furniture, complete all the worlds, or run the most successful café, Disney Magical World 2: Enchanted Edition is a nice change of pace from other management sims because everything also stays open and works with you to play how you want, regardless of what time it is.

Disney Magical World 2: Enchanted Edition is a nice little upgrade from one of the 3DS’ more popular management sims. It provides more to do than just your standard run-of-the-mill management of a café, and also provides a simple yet fun dungeon crawling elements alongside an extensive list of collectibles, furniture, cosmetics, and more that give the game a large amount of depth in the globally beloved magical world of Disney. Getting to meet, explore, dance, and have fun with Disney’s colorful cast of characters from Lilo & Stitch, to Elsa & Anna, Winnie the Pooh, and of course Mickey Mouse and co. with your created characters and Miis gives the magic a more personal feel and is awesome to see when you can’t afford a trip yourself to the likes of Disney World and Disneyland. While the game is far from perfect and boredom will naturally occur through the repetition of constantly having to go into dungeon levels in just a few handpicked worlds with bugs occasionally throughout, it’s at least addictive enough that one can easily squeeze out a lot of hours from it, and play almost endlessly as they aim to collect hundreds of items and perfect their café ratings in Castleton. It won’t blow anyone away with its basic up-res, but at the very least it’s a nice offering for the Switch and those who want a more relaxing and magical experience featuring some of their favorite Disney characters and princesses.

Disney Magical World 2: Enchanted Edition copy provided by the publisher for the purposes of this review.