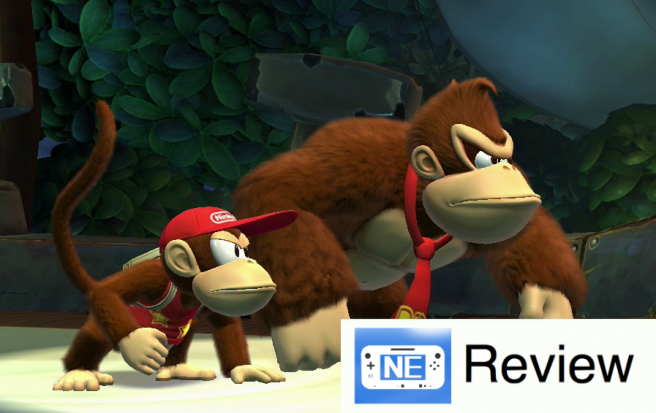 Review transcript after the break:

Donkey Kong Country: Tropical Freeze is the Wii U’s first notable title of the year 2014, and with its arrival comes a lot of outside expectation: The allure of formula refinement from Retro Studios after their first DK success teases us with what could be one of the best 2D platformers in years, and the return of series composer David Wise excites long-time fans of the original SNES soundtracks. The game seems destined to succeed on at least some level, but what some may be surprised to hear is just how close Donkey Kong Country: Tropical Freeze comes to absolute platforming perfection.

If we’re going to be throwing around terms like “platforming perfection”, we should first qualify what kind of platforming we really mean: Perhaps drawing a line between itself and its contemporaries, Donkey Kong Country: Tropical Freeze does not sit comfortably with the idea that a platformer should be a smooth and painless ride, nor does it believe that the 2D platforming genre should be devoid of a sense of adventure. It immediately and decisively pulverizes the notion that aesthetic design should play a backseat role in gameplay-driven experiences, but also refuses to let its visual and aural spectacle smother the satisfaction or sophistication of its level design. It exists as a testament to strength in concept and consistency in follow through, rarely compromising on its desire to give you a meaningful and engaging experience, and always displaying a supreme elegance in composition.

At its core, Tropical Freeze is a game about engagement. It almost universally refuses to pander to you, but it’s not defiant or harsh in its stance: instead, it persuasively and kindly asks for your full attention, and rewards you handsomely should you opt to give it.

This occurs as the result of many design elements, but in order to respectfully ask that you pay attention, a game must first give you a world worth paying attention to. And Tropical Freeze does.

Not only are all of the levels smoothly designed and generally pleasant to look at (which has become a Nintendo staple as of late), but the vast majority of them are aesthetically unique from one another. There is often a vaguely unifying theme that ties them together, but the specifics become so greatly differentiated that you’ll begin to look forward to playing the next level simply to see what the game manages to visually throw at you. Some levels are exciting, others mesmerizing, others clean and breathable; the important thing is that none of these adventurous changes in visual tone feel superficial. There’s a deeply thought-out design behind each of them that you feel intrinsically, but can also see hidden within the painstaking detail in background images, proprietary animations, and level-specific assets. Though varied, the levels never feel incongruent or disjointed either; all of them are just similar enough to support a grander sense of adventure and progression, but different enough to keep your senses engaged.

To further push the game’s adventurous agenda is the diverse, prolific, and beautifully composed soundtrack. David Wise makes his return to the Donkey Kong Country series after Retro Studios standby Kenji Yamamoto composed the soundtrack for this game’s predecessor on Wii, and his score adds to the game in ways not absolutely quantifiable, but entirely essential. True to the series’ roots, the music opts to be interesting rather than self-aggrandizing– complementary rather than separated– but with an extremely cultured dose of melodic hooks to help ease you into the experience. The result of this tasteful composition is a deeply enjoyable soundtrack that’s always interesting enough to keep you engaged, but never so self-involved that it takes away from the game’s other elements. Let’s take a brief listen at one of the game’s more atmospheric tracks:

Of course, aesthetics aren’t everything, and in a game where the aesthetics are so undeniably strong that’s sort of amazing. No, Tropical Freeze isn’t any more about aesthetics than it is about gameplay, and the gameplay here is extremely intelligently put together.

The foundation of the gameplay in Tropical Freeze is its level design. Each level is extremely carefully crafted in order to make sure that any skills you may need later will be taught to you intrinsically, in a safe environment, and then gradually expounded upon as the game progresses. What this does is lay the groundwork for an experience that can be tough as nails but extremely fair. Let’s take a look at an example:

– In the zipline shrine level, players are presented with a zipline over safe ground, with effectively no enemies nearby to hurt you. Once we learn to use that zipline mechanically, they immediately present us with a second zipline that ends and falls into another one. This forces the player to learn that it’s possible within Tropical Freeze to drop onto lower ziplines simply by holding the same button you already learned how to use. Next they coax us into jumping up from a zipline by placing this shiny Kong letter within our grasp, we leap for it, and have no intrinsically learned three skills that will aid us later.

In a showcase of quality design, the next set of ziplines requires all three of these skills. If we die on this challenge we do not feel as though we’ve been given an unfair test of skill– the game is fair, and it’s not necessarily clear while you’re playing, but that feeling of fairness stems from the game’s ability to teach you without telling you that it’s teaching you. Never will you face a challenge you haven’t been equipped to deal with, and always will you intrinsically feel as though you’re exploring every gameplay element– like the ziplines– in a progressive manner.

Though we’ve known for a while now that the introduction and exploration of gameplay mechanics is a sound formula for a successful video game, seeing a game execute it with such confidence remains vitalizing, especially on such a widespread and consistent scale. It is not simply one or two levels that use this device– it’s nearly all of them, each one often different from the last.

Though intuition would tell you that any great game should create a solid gameplay base and build upon it with aesthetic appeal, almost the opposite ends up being true for Tropical Freeze. The visual and aural spectacle constantly lingers in the background, prepared to fill in the lapses in gameplay excitement, such as when a player is retreading familiar ground after dying, or simply going through an easier part of a level. The lapses in excitement are not a negative thing though– no, without them the gameplay would feel flat and indistinct– but where a player might otherwise feel bored, Tropical Freeze falls back upon its aesthetics. This is beneficial not only because it serves to keep the player fully engaged, but also because it allows the game to utilize the benefits of repetition– chief among them the formation of stronger memories of specific locations or gameplay devices– without risking that the player feel thrown out of the funhouse.

They serve as something of a fail-safe: When gameplay excitement drops below a certain threshold, the visuals and musical score step in to keep you engaged as long as you’re willing to pay attention. When the gameplay begins to drain more of your brain power, the aesthetics fall by the wayside. This is a two-person dance that’s difficult to master, but Donkey Kong Country: Tropical Freeze manages to make it look second nature.

This isn’t to say that aesthetic never falters in quality though– occasionally the visual design lays back an inch too far and disguises itself as generic, but in almost all of these scenarios the gameplay is chaotically firing on all cylinders, stealing away your concentration and masking the slight drops in visual quality. Aside from that, there are only a handful of very minor complaints to be had: Load times are slightly long, but easily ignorable, and the controller options only allow for maneuvering with the joystick OR the directional pad, when really it would be ideal to have both handy, as the former is better underwater and the latter succeeds on land. These are minor blemishes, but blemishes nonetheless.

The orchestra of talented instruments that make up Donkey Kong Country: Tropical Freeze play a song perfectly paced with moments of pleasantry, excitement, spectacle, and gratification. When you step back and wonder what about the game brings about such a feeling of cohesion and absorption, it becomes clear that neither element– aesthetics or gameplay– could shine as brightly as it does without help from the other, but also that the sensory spectacle that the visual art and music provide are really the crux of this experience. Without them, the game would come across as a solid-but-typical platformer. With them, it’s an engaging sidescrolling adventure.

Each element shows almost no sign of weakness, and in observing them separately one might come to the conclusion that each was crafted by a masterful set of hands. Put them together, however, and the they dance beautifully– Donkey Kong may be a brutish and rugged character, but his latest game is about as graceful and cultured as one could wish for.

Though it may at first appear to be a passive retreading of familiar tried-and-true platforming mechanics, Donkey Kong Country Tropical Freeze’s aesthetic design brings it to a place far more engaging and adventurous than 2011’s Donkey Kong Country Returns. An attention to authentic artistic detail means that the game is no longer just for fans of platforming gameplay, but also those with an itch to feel a grander sense of progression, where you can look back upon the hours spent and remember iconic things you saw, did, or heard.

If you can at least put up with platforming mechanics, Tropical Freeze is something of a no-brainer. It won’t convince those that are deeply and psychologically opposed to the roots of the genre– it is, after all, beholden to those roots– but anyone else willing to give it a fair shake should find it to be a remarkable time.